The Effect of Glucose Concentration

Yeast, also known as a saccharomyces cerevisiae, is single celled eukaryotic cells that are in the kingdom fungi and are unicellular organisms which normally reproduce asexually by budding at a very high rate. Scientists quite often decide to work with yeast because of its features fast growing rate and the fact that yeast’s DNA can be easily manipulated. Some types of yeast can be found naturally on plant or in the soil. Also it is worthwhile mentioning that yeast feeds on sugar very well, and so that I decided to use glucose.

Don't use plagiarized sources. Get your custom essay on
“ The Effect of Glucose Concentration ”
Get custom paper
NEW! smart matching with writer

I also will also make sure that while conducting an experiment, I will keep the flasks absolutely clean all the time. This will help to avoid the chance of bacteria building up, and so the competition over the glucose will be avoided.

The mass added and the intervals of adding must be controlled, because it might affect the overall outcome. In order to get good fermentation environment for the yeast, the incubator will be kept around 30c.

My hypothesis for this experiment is that the greater the concentration of glucose will be added, the faster the rate of respiration will be. This is because more glucose added to the yeast will mean more glucose to break down, therefore producing ethanol and carbon dioxide. Also to support my hypothesis I would mention that, more concentration of glucose will result in the more heat energy produced and so more molecules will move around and collide.

Measured by measuring cylinders/pipettes, as a percentage to the water solution

Measured by a top pan balance

Yeast is left to settle for 5 minutes after it will be mixed with glucose and the amount of gas has to be recorded from the start.

Measured by a thermometer

C: Varies throughout the day, but each yeast solutions gets the same temperature

It is important to keep the temperature the same throughout the whole experiment because enzymes might work faster or slower depending on the temperature.

Count the amount of bubbles every 1 minute

To read the burette correctly it is important to remember that the lowest numbers start on top and go up to the highest numbers at the bottom.

The curved surface at the top of the liquid level is called a MENISCUS.

Weigh four different amounts of glucose 1g,2g,3g,4g and 5g and place each amount into a conical flask .

Add 100 ml of water to the conical flask and swirl until the glucose is fully dissolved.

Yeast has to be heated up before mixing it with sugar because as soon as we add the sugar the enzymes will begin to break down the glucose , so it will be an unfair test

Occasionally swirl the yeast suspension including water and glucose for 5 minutes, and then leave it to settle for about 2-3 minutes. The same concentration of yeast must be mixed each time.

Complete the burette and hold it with one hand, and the other hand covering the syringe

Then start to record measurements for 1minute intervals (read the top of water bubble not the bottom).

The temperature has to be monitored and checked if its stays the same using a thermometer.

It is also important to measure the output of the gas each time.

If I were to repeat my experiment I would’ve done it one more time in order to see whether my results are reliable or not, so the data will be used to compare with my previous data from a previous experiment. To see the difference between the results it will be the best to draw a graph illustrating them, in order to see whether the correlation of my results was negative or positive, it would be a good idea to draw a line of best fit.

The Effect of Glucose Concentration. (2016, Aug 07). Retrieved from https://studymoose.com/the-effect-of-glucose-concentration-essay 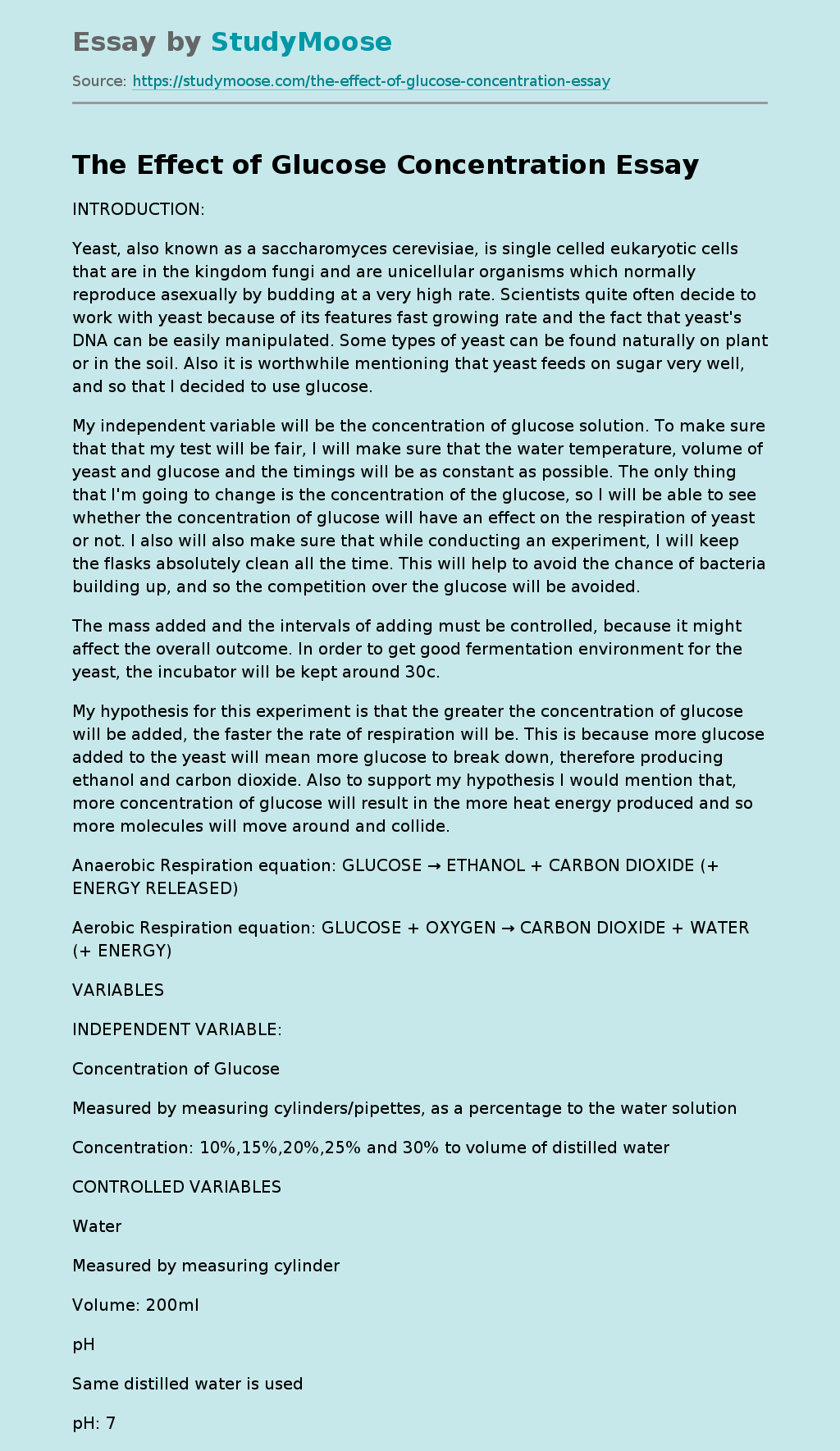