The Education System: Does It Support and Maintain a Capitalist Society?

Assess the view that the education system serves to maintain the capitalist society Marxism is a conflict view that sees society as being based on class divisions and exploitation. Marxists argue that in society there are two classes – the bourgeoisie which is the ruling class and the proletariat which is the working class. The capitalist class owns the means of production and make their profit by exploiting the labour of the working class. This creates class conflict that could threaten the stability of capitalism or even result in a revolution to overthrow it.

Don't use plagiarized sources. Get your custom essay on
“ The Education System: Does It Support and Maintain a Capitalist Society? ”
Get custom paper
NEW! smart matching with writer

Social institutions such as the education system reproduce class inequalities and play an ideological role by persuading exploited workers that inequality is justified and acceptable. Despite the inequalities in the system, capitalists are able to hold on to power because they control the state. Althusser (1971) claims that the state consists of two elements which help to keep them in power, the first one being the repressive state apparatus – when necessary to protect capitalist interests, the state uses force to repress the working class via the police, courts and army.

The first one being reproduction, education reproduces class inequality, by failing each generation of working class pupils in turn and thereby ensures that they end up in the same kinds of jobs as their parents, as mentioned in Item B – where males are taking their education as a joke simply because they know where they’re going to end up like their fathers.

Secondly, education legitimises (justifies) class inequality by producing ideologies (sets of ideas and beliefs) that disguise its true cause. Education tries to convince people that inequality is inevitable and that failure is the fault of the individual, not the capitalist system. Other sociologists such as functionalists and the New Right disagree with Marxist explanations. Parsons argues that education performs positive functions as a whole. According to Bowles and Gintis (1976), capitalism needs workers with the kind of obedient attitudes and submissive personality – type that is willing to accept hard work, low pay and authority. Like Althusser, they see the role of the education system in capitalist society as reproducing an obedient, exploitable workforce that will accept social inequality as inevitable and fair. To achieve this, successive generations of workers needs these ideas firmly planted in their minds – and this is the function of the education system. Bowles and Gintis argue that there is a close correspondence between relationships in school and those found in the workplace. This similarity creates new generations of workers ready to accept their lot and serve capitalism. In capitalist society, school is like work in many ways, for example alienation – pupils lack control over education and in the workplace workers lack control over production. Hierarchy is another way in which they are mirrored, head teachers are more important than normal teachers who are more important than pupils, where in the workplace the boss is more important than the supervisors who are of more authority than the workers. However, Reynolds (1984) claims that the curriculum does not seem designed to teach either the skills needed for employers or uncritical passive behaviour that makes workers easy to exploit. Brown (1997) points out that workforce concentrates on building teamwork and shared creativity, whereas, the exam system in which people are judged and compete with one another as individuals discourages the development of these skills. Marxists have exposed the myth of meritocracy and shown how education can serve the interests of capitalism by reproducing and legitimising class inequalities. However, sociologists from other perspectives are critical of the Marxist view.

The Education System: Does It Support and Maintain a Capitalist Society?. (2016, Apr 04). Retrieved from https://studymoose.com/the-education-system-does-it-support-and-maintain-a-capitalist-society-essay 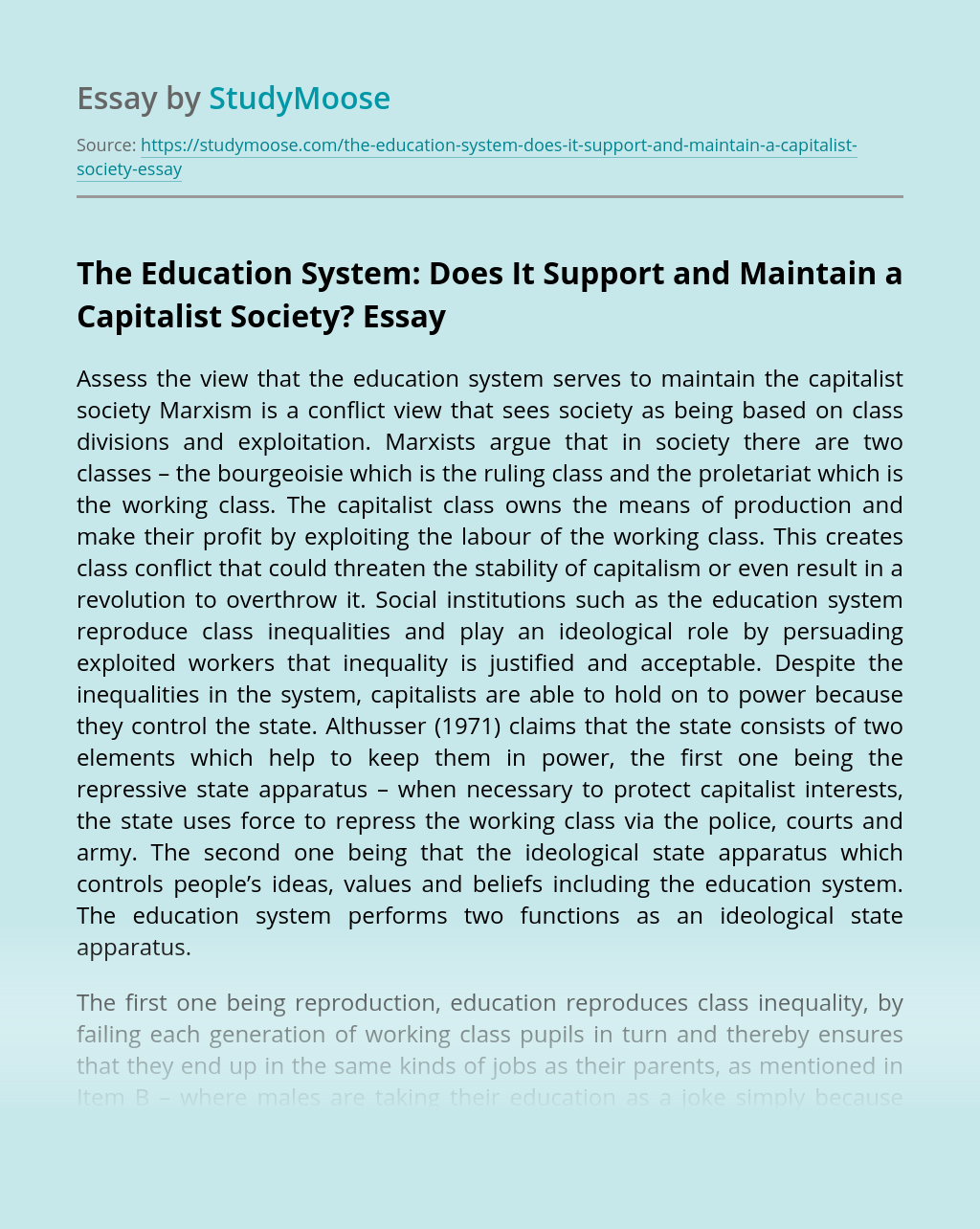