•Well, the Great Depression of the 1930s was one of the main factors that caused the Dust Bowl of the same period but it was not the MAIN CONTRIBUTING factor that lead to the ecological disaster. The other guilty parties like the unusually high temperatures of the environment, the lengthened droughts during the 1930s and also the poor agricultural farming practices made by the farmer, which lead to the top-soil eroding rapidly, increasing the devastation of the DB The poor farming practices made by the inexperienced or ignorant farmers caused many of the fertile top-soils to be blown away by the wind, leaving the land inhospitable for growing crops and any other basic necessities.

Don't use plagiarized sources. Get your custom essay on
“ The Dust Bowl ”
Get custom paper
NEW! smart matching with writer

This was the main catalyst for the “black blizzards” to hit America and disrupt many of their lives.

•The main causes of the dust bowl were extreme drought for eight years in total, and also very poor farming techniques on the behalf of the inhabitants. Normally crops are rotated (different crops are grown in an area each year or sometimes no crops at all) so as to never deplete soil too much.

This was never done in the Dustbowl area, where the land was farmed to death leaving nothing to secure topsoil, creating this massive amount of dust to be blown huge distances by the wind.

•The Dust Bowl brought ecological, economical and human misery to America during a time when it was already suffering under the Great Depression. While the economic decline caused by the Great Depression played a role, it was hardly the only guilty party.

What circumstances conspired to cause the Dust Bowl? Economic depression coupled with extended drought, unusually high temperatures, poor agricultural practices and the resulting wind erosion all contributed to making the Dust Bowl.

The seeds of the Dust Bowl may have been sowed during the early 1920s. A post-World War I recession led farmers to try new mechanized farming techniques as a way to increase profits. Many bought plows and other farming equipment, and between 1925 and 1930 more than 5 million acres of previously unfarmed land was plowed [source: CSA]. With the help of mechanized farming, farmers produced record crops during the 1931 season. However, overproduction of wheat coupled with the Great Depression led to severely reduced market prices. The wheat market was flooded, and people were too poor to buy.

Farmers were unable to earn back their production costs and expanded their fields in an effort to turn a profit — they covered the prairie with wheat in place of the natural drought-resistant grasses and left any unused fields bare. But plow-based farming in this region cultivated an unexpected yield: the loss of fertile topsoil that literally blew away in the winds, leaving the land vulnerable to drought and inhospitable for growing crops. In a brutal twist of fate, the rains stopped. By 1932, 14 dust storms, known as black blizzards were reported, and in just one year, the number increased to nearly 40.

•When settlers came to the area, they built farms and planted crops. Their crops replaced the natural grasses in the area, which had root systems more capable of sustaining life under the difficult conditions. 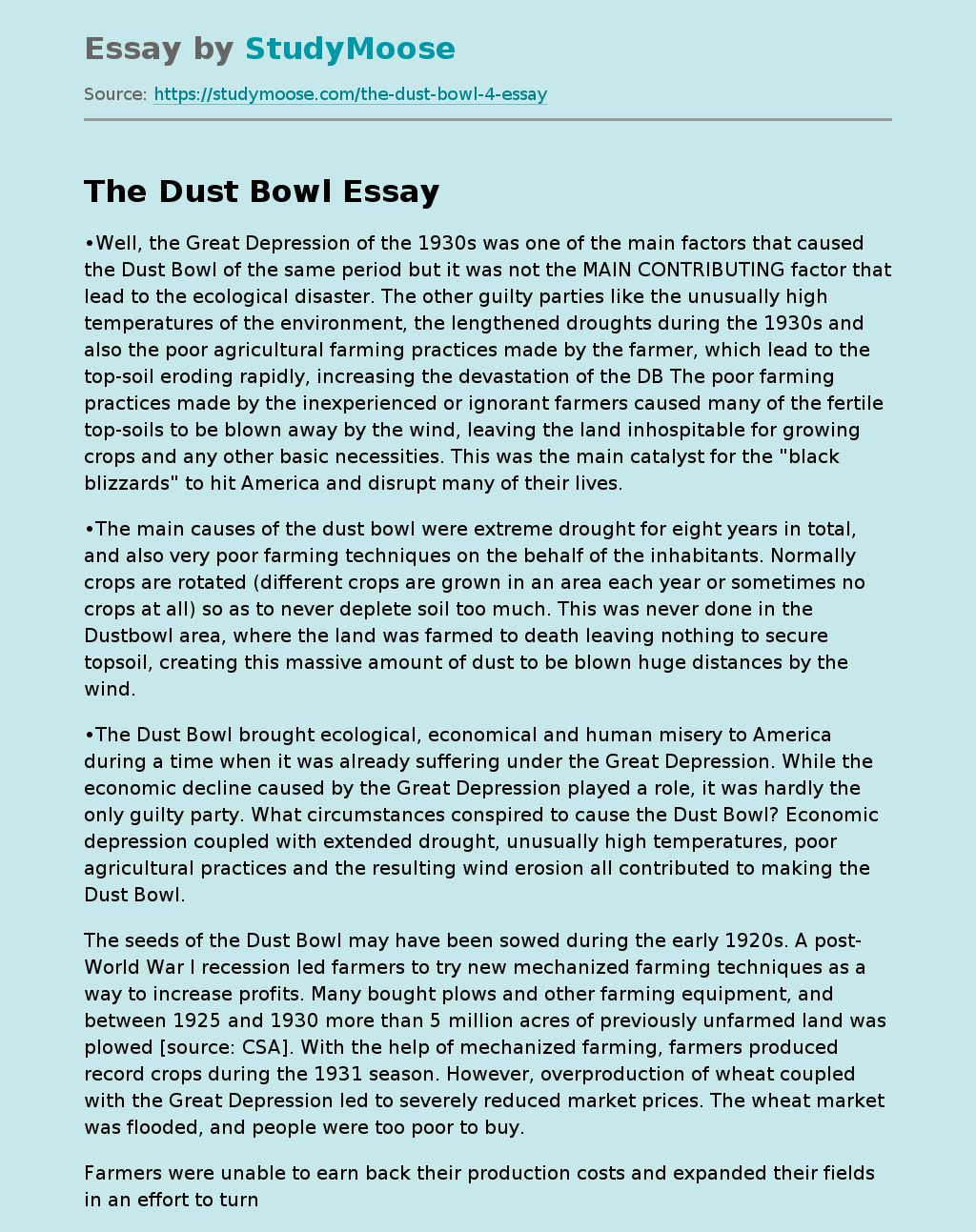