The Discovery of Insulin in Medicine

Diabetes mellitus, or simply, diabetes is a disorder of carbohydrate metabolism characterized by impaired ability of the body to produce or respond to insulin and thereby maintaining proper levels of glucose in the blood (Encyclopedia Britannica).

Don't use plagiarized sources. Get your custom essay on
“ The Discovery of Insulin in Medicine ”
Get custom paper
NEW! smart matching with writer

In the late 1700’s Dr. John Rollo, a British physician, came up with a plan for diabetics: a low-carbohydrate diet high in fat and animal protein. This was revised for the next 150 years, and resulted in Dr. Fredrick M. Allen’s idea of a near-starvation diet as little as 450 calories per day. Because of this, however, most diabetic patients were severely malnourished and very few weighed more than 70 pounds towards the end of their illness.

In 1920, Dr. Frederick Banting wanted to make a pancreatic extract for diabetics, which would hopefully have anti-diabetic qualities.

Then, in 1921, Banting along with medical student Charles Best managed to make the pancreatic extract. They surgically ligated the pancreas of a dog, stopping the flow of nourishment, so that the pancreas degenerated. Then, they removed the pancreas, sliced it up and froze the pieces in a mixture of water and salts. They were finally able to ground up and filter the half frozen pieces. The extract was then named isletin, which is currently known as insulin.

Banting and Best first managed to test the extract on diabetic dogs, keeping them healthy and free of symptoms with just a few injections a day. At this point, Professor J. MecLeod managed to get his whole research team to work on the production and purification of insulin. Then, J.B Collip joined to scientific team to test the new discovery on humans.

In 1922, the insulin was tested on Leonard Thompson, a 14-year old diabetes patient who lay dying at the Toronto General Hospital. The results were spectacular. Then, the scientists went to other wards with diabetic children, injecting them with their new purified extract.

In hopes that insulin would be available quickly and at an affordable price, Banting and his team sold the patent for this extract for only $1 to the University of Toronto. However, because the discovery of insulin was so significant, the patent could have been sold for millions of dollars. Nonetheless, the application of science was able to interact with economic factors in a very positive way.

In terms of social factors, insulin has been able to save the lives of millions of diabetics across the world. Without the discovery of insulin, diabetes could still be a life threatening illness, which would not only affect those diagnosed, but their families and friends as well. In turn, this affects society on a global scale.

In conclusion, although insulin doesn’t cure diabetes, it’s one of the most significant discoveries in medicine to date. In fact, Banting and Macleod were awarded the Nobel Prize in Physiology or Medicine in 1923 for successfully treating diabetes. Due to the efforts of Banting and his team, diabetics across the globe can live long and healthy lives.

The Discovery of Insulin in Medicine. (2016, May 04). Retrieved from https://studymoose.com/the-discovery-of-insulin-in-medicine-essay 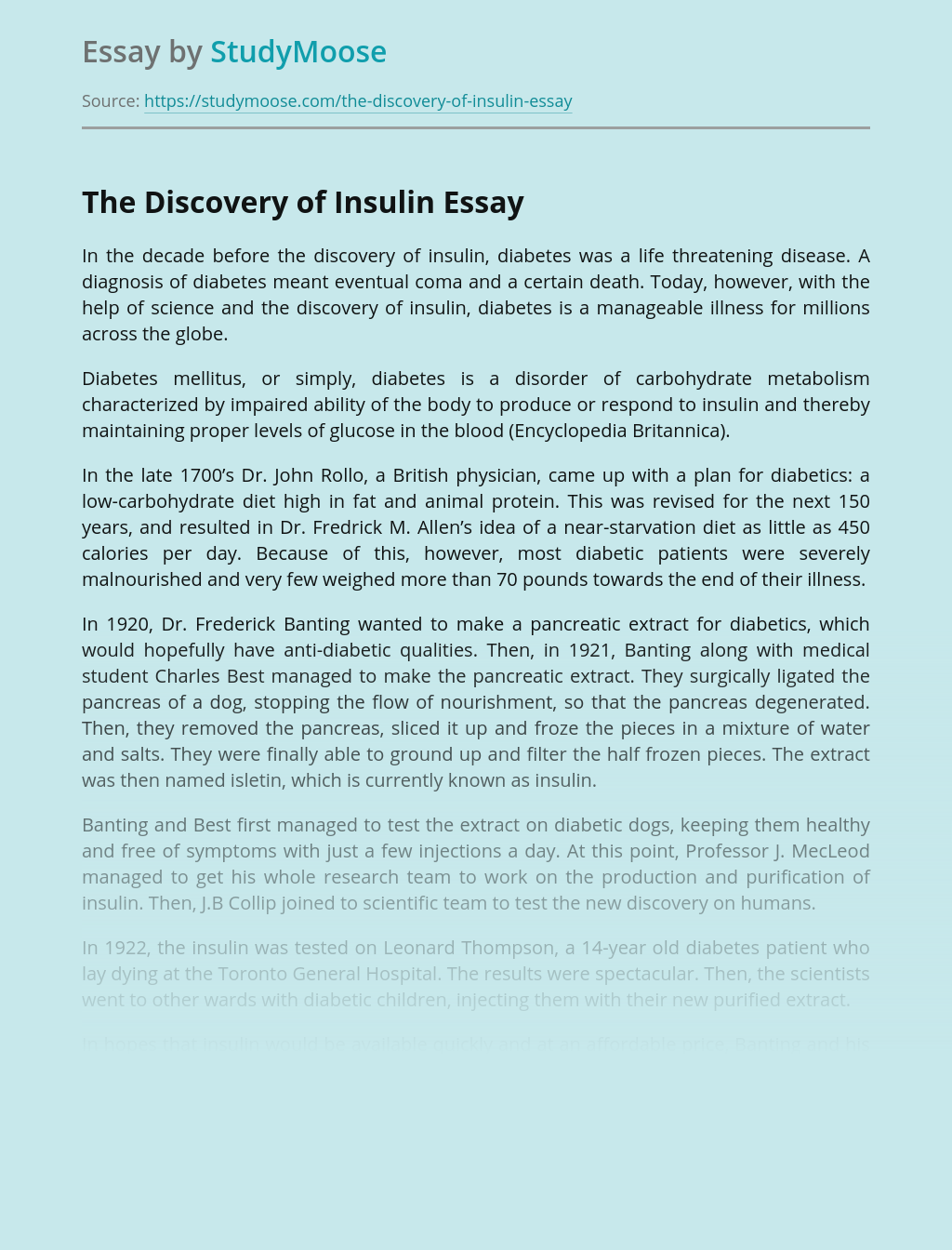