The late 18th Century in American history was dominated by an era of emotional and individualistic values of oneself, and a powerful sense of limitless possibilities. This was the Romanticism Period. An incredible number of miraculous masterpieces were contrived during this period of enlightenment, including Nathaniel Hawthorne’s dramatically thematic and ambiguous short story, “Young Goodman Brown”, as well as Ralph Waldo Emerson’s intriguingly influential and uplifting essay, “Self-Reliance”.

Hawthorne’s writing aspires to implicate theories and themes about the reality of the world we live in and to illustrate our individual limitations through the art of symbolism and irony.

Don't use plagiarized sources. Get your custom essay on
“ The Dichotomy of Self Reliance and Conformity ”
Get custom paper
NEW! smart matching with writer

Emerson uses a unique approach in his writing, endeavoring to inspire people to appreciate the world they live in, and to have faith and confidence in themselves. Although it is profoundly clear that Hawthorne and Emerson have two imposingly different ideologies about life and personal limits, Hawthorne seems to integrate some of Emerson’s ideas and values in “Young Goodman Brown”.

Through his ingenuously brilliant use of several literary devices, including allegories, Hawthorne incorporates the idea that Young Goodman Brown fails to have faith in himself and is afraid of failure, which leads to his ultimate destruction. While Hawthorne weaves Emersonian thoughts, into his work such as those found in “Self-Reliance”, he also critiques them in “Young Goodman Brown” where he focuses on the theme of good and evil, which contradicts Emerson’s belief that people are innately pure and good.

The Romanticism Period in America consisted of two diverse categories, the enticing Dark Romantics and the inspirational Transcendentalists.

Dark Romantics focus on themes of sin and evil, and believe that pain and temptations are great forces, which are meant to be dealt with and experienced. Dark Romantics are drawn to the strong images of the picturesque past through symbolism and tend to write with an ambiguity of manner on the complexities and ironies of life, qualities which Hawthorne successfully incorporated in “Young Goodman Brown”.

Notwithstanding Hawthorne’s Dark Romantic qualities, he does appear to embody some of the ideals and principals Transcendentalists, such as Emerson, abide by. Emerson, bearing an optimistic view of life and human nature, believed in promoting peace in the world by encouraging people to get in touch with their true self and tended to see things in either black or white.

In the beginning of “Young Goodman Brown”, the inexperienced character Goodman Brown, who shares Emerson’s vision of seeing people in black and white, presumes that everyone in his community is either good or bad. The similarity of beliefs between Hawthorne’s character, Goodman Brown and Emerson’s ideology, embraces Hawthorne’s implication of how inaccurate a person’s perception may be and how things are not always as they appear.

Although Goodman Brown held his family members in high regard, claiming, “my father never went into the woods on such an errand, nor his father before him”, he becomes flustered when the elder traveler, who accompanied him in his sinful journey through the woods, replies, “I have been as well acquainted with your family as with ever a one among the Puritans;” reassuring Goodman Brown that his father and grandfather were not as innocent as he so robustly assumed. (102). Goodman Brown, being the innocent and gullible individual that he is, races to the conclusion that everyone is now evil, evidencing Emerson’s ideology of innocence and purity.

Emerson believes that it is wrong to allow one self to be influenced by another, and that one must trust in his or her own intuition rather than conform to the belief of others. Goodman Brown did the complete opposite. He immediately condemned his father and grandfather once his accompanying traveler argued that they too had sinned, leading him to loose faith in goodness. In support of Emerson’s ideology of trust, Hawthorne allows his readers to assume that Goodman Brown’s lack of personal trust is what leads him to isolation.

Hawthorne uses the idea of Goodman Brown’s journey in the form of a dream as a means to establish uncertainty in the mind of the reader. For the same reason, the narrator poses the question, “Had Goodman Brown fallen asleep in the forest and only dreamed a wild dream of a witch-meeting? ” (111). Hawthorne leaves this question unanswered to show that it does not matter if Goodman Brown’s experience was real or a dream, but what matters is how it impacted him. According to Emerson, people must trust themselves before trusting others. One must have confidence in his or her own abilities.

Goodman Brown completely shunned everyone around him and isolated himself from his community, and although Emerson believed that conforming to society scatters one’s individual self, he would not have approved of isolationism. As expected, Emerson and Hawthorne clearly had different views about American culture and society. Emerson viewed America as a new and innocent country with a clear slate, unburdened by previous historical events as Europe had been. Hawthorne on the other hand has a more realistic view of America. He realizes that America is not as innocent as Emerson implies.

He believes that America’s history is still part of the country and he acknowledges human fault. When the devil reassures Goodman Brown, “I helped your grandfather, the constable, when he lashed the Quaker woman so smartly through the streets of Salem;” Hawthorne illustrates through real events in American history how the Quakers were persecuted by the Puritans in the 1650s, and also refers to King Philips War between the Puritans and Native Americans, when the devil tells Brown that he helped his father, “set fire to an Indian Village, in King Philip’s war”, implying that America does not have such a clear slate (102).

Hawthorne seems to have the ability to represent a character, such as Young Goodman Brown, that has characteristics and beliefs that he does not necessarily approve of. The reason for this is possibly because his family’s history stretches back to the early days of the Salem Witch Trials where he became well acquainted with Puritan society.

Being a master of symbolism, Hawthorne successfully conveys his message of acknowledgement of human faults and that there is as much evil in the world as there is good. Although the theme of good and evil that Hawthorne believes in does not coincide with Emerson’s belief that people are purely good, the theme of trust and faith in “Young Goodman Brown” seems to relate to both of the authors’ theories.

Emerson’s support of the idea that people should believe in themselves directly opposes Hawthorne’s idea, as portrayed by Goodman Brown, which questions whether people are truly fit to make decisions for themselves. Emerson espouses the ideology of “Self-Reliance” whereas Hawthorne takes on a conformist view. It would probably be safe to say that our own personalities are made up of a combination of both schools of thought rather than strictly one or the other.

The Dichotomy of Self Reliance and Conformity. (2016, Oct 06). Retrieved from https://studymoose.com/the-dichotomy-of-self-reliance-and-conformity-essay 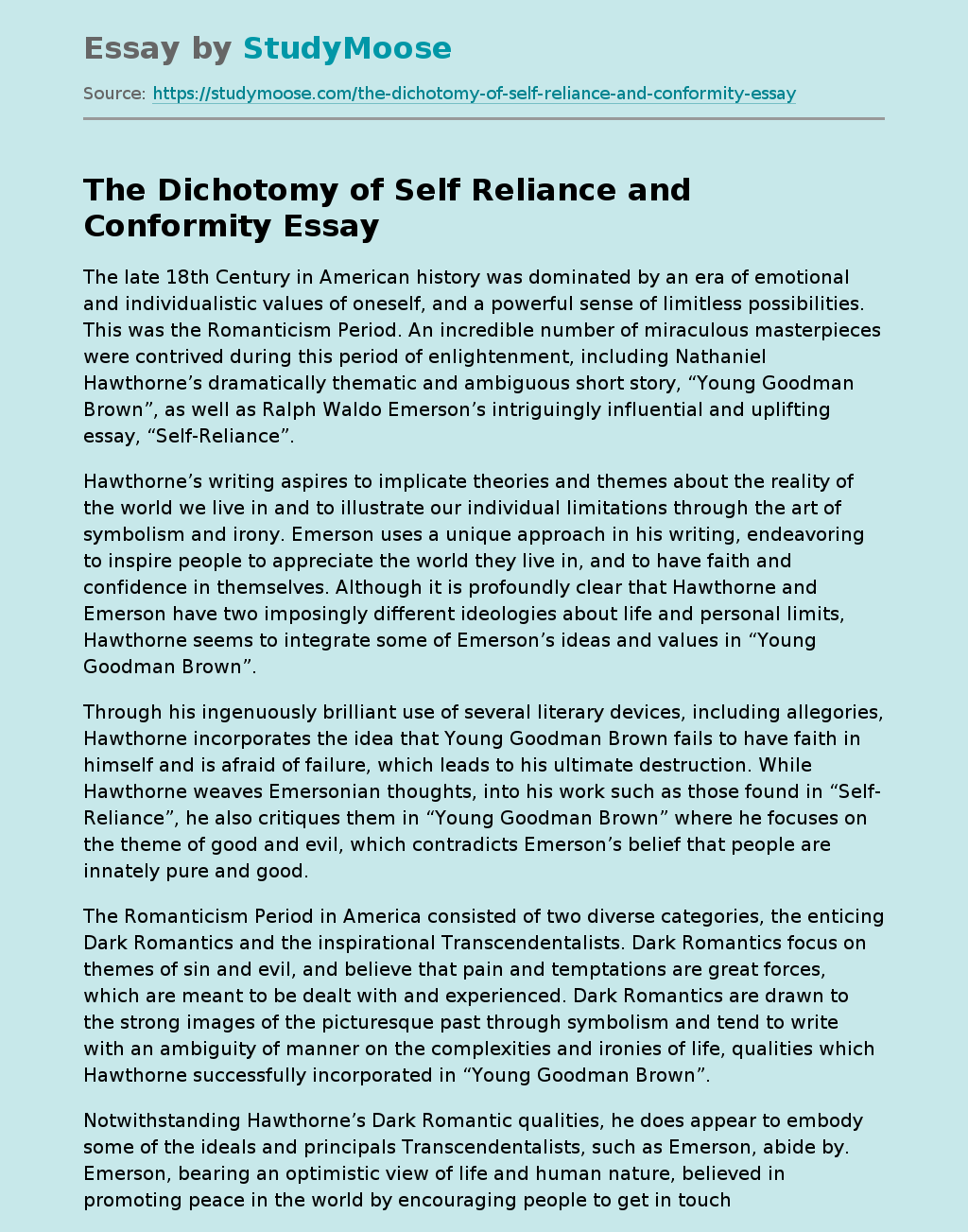