The Detrimental Effect of the Internet on a College Student's Academics

The internet had been around for so long and the question that many psychologist and doctors get is, “Is google making us stupid’? College students who has used the internet as a resource has a detrimental effect on their academics.

Less and less students can keep focus while reading a textbook. Technology also have an effect on the human brain in a major way as well too because reading printed books on a computer is creating shortcuts for our brain. Socially the internet is messing us up; social media is a big tear that has many factors to it also.

Don't use plagiarized sources. Get your custom essay on
“ The Detrimental Effect of the Internet on a College Student’s Academics ”
Get custom paper
NEW! smart matching with writer

Social factors of our family’s technology have changed. My position is that the internet is making us less intelligent because over time it has made a negative effect on college student’s academics, the changing of the human brain, and we are socially affected.

College students who have used the internet as a resource experienced a detrimental effect on their academics. Less and less students can keep focus while reading a textbook. “Students do not write essays these days. Rather, using google search, copy, and paste, they glue pieces of information together, hardly understanding what they are producing.” (Maurer 49.) Majority of college students tend to lose that basic knowledge of reading out of a printed textbook because of the effects of the internet. “Routinely, students seem to only remember what they saw on the screen or heard during the narration to accompany the training, and it may not be sufficient to create the connections which lead to enduring personal knowledge like Mr.

carr mentioned above.” (Harris 9.) As the quote above explains that students only remember what they saw on screen; we as humans have a photographic memory so we only remember pictures. Students who do homework and researches don’t tend to understand a lot because its easy to get away with what they wouldn’t get away with such as examples like comprehension, analysis, etcetera. This also explains why college students have short tension spans because the photographic memory we have.

Also, a lot of the low levels and effects college student academics is because of e-learning; for example, online classes replace good teachers which then becomes a result of students teaching themselves. “A blind trust that e-learning can replace good teachers often leads to less educated children; apps are substituting thinking and cognitive capacity is shrinking.” (Maurer 49) Reading out a text book is not the same as reading an article on the internet. It’s a different process for the memory.

Technology influences the human brain negatively and there is also a Brightside to the use of technology on the effect of the human brain. “Instead of investing the time to learn and commit details to memory, is affecting our capacity to learn and execute our daily tasks.” (Harris 8) As we use the internet, we don’t often take the time to learn what’s on the screen in front of us. We often always rush because we want to get something done. It’s just like reading a book, you can read a book and still not comprehend what your reading because the use of technology has made us to learn how to skim read. When we skim read we interpret a different meaning; often the wrong meaning. In my conjecture, Skim reading affects how you perform your daily task because your so used to looking over things it becomes a habit. The internet has its ways of thinking for us.

For example, Microsoft office has become one of the most powerful tools for college students and businesses. When college students write papers, they don’t see what they messed up on they don’t try think of what they did wrong. “Research has shown that more and more people are relying on automated tools such as “spell check” and “auto fill” when they are entering data, typing messages, etc.” (Harris 8) majority of Microsoft office have these features which tend to get used a lot especially spell check. As I was saying before our brains have photographic memory; the more we use technology it makes us think we saw something in the real world but it was something that the person saw online. Our brains can be tricky and manipulate what we see or believe. “Our electronic “aids” in essence become extensions of our own memories and thought processes.” (Harris 9) Despite that the internet influences our brain, Technology makes us more efficient as humans because we get things done faster. “Overall, technology allows us to be much more efficient and removes some level of human error which can occur during manual processing. …” (Harris 10) Internet is such big help for organization. Humans help each other through the internet such as posting videos on YouTube, Facebook, snapchat, twitter, Instagram, etcetera. Different websites for everything including school, businesses, jobs, tutors, etcetera.

Technology affects our families and the people around us socially because people get influenced by the internet. Now a day’s smaller children pay attention more to phones electronics and games more than playing outside. Before Electronics we were able to play board games with our siblings and have sleep overs and watch movies or go to the mall with our friends.” …we waited to be for the mail carrier to bring our us our grades, airmail, or birthday cards.” (Hoffman 210) Now we have emails that we receive and we can talk constantly to people. These cellphones have shaped our lives and when I’m in public so many people are looking down for 10 mins at a time at their phone. Society doesn’t speak to each other in person to person but they rather speak behind a computer screen and express how they feel. Technology promotes a lot of cons in society but as we evolved to using technology it becomes harder for society to communicate in person.

The internet is making us less intelligent because over time it has made a negative effect on college students academics, the changing of the human brain, and we are socially affected. College students who have used the internet as a resource experienced a detrimental effect on their academics. Less and less students can keep focus while reading a textbook. Technology influences the human brain negatively and there is also a Brightside to the use of technology on the effect of the human brain. Technology affects our families and the people around us socially because people get influenced by the internet.

The Detrimental Effect of the Internet on a College Student's Academics. (2021, Sep 12). Retrieved from https://studymoose.com/the-detrimental-effect-of-the-internet-on-a-college-student-s-academics-essay 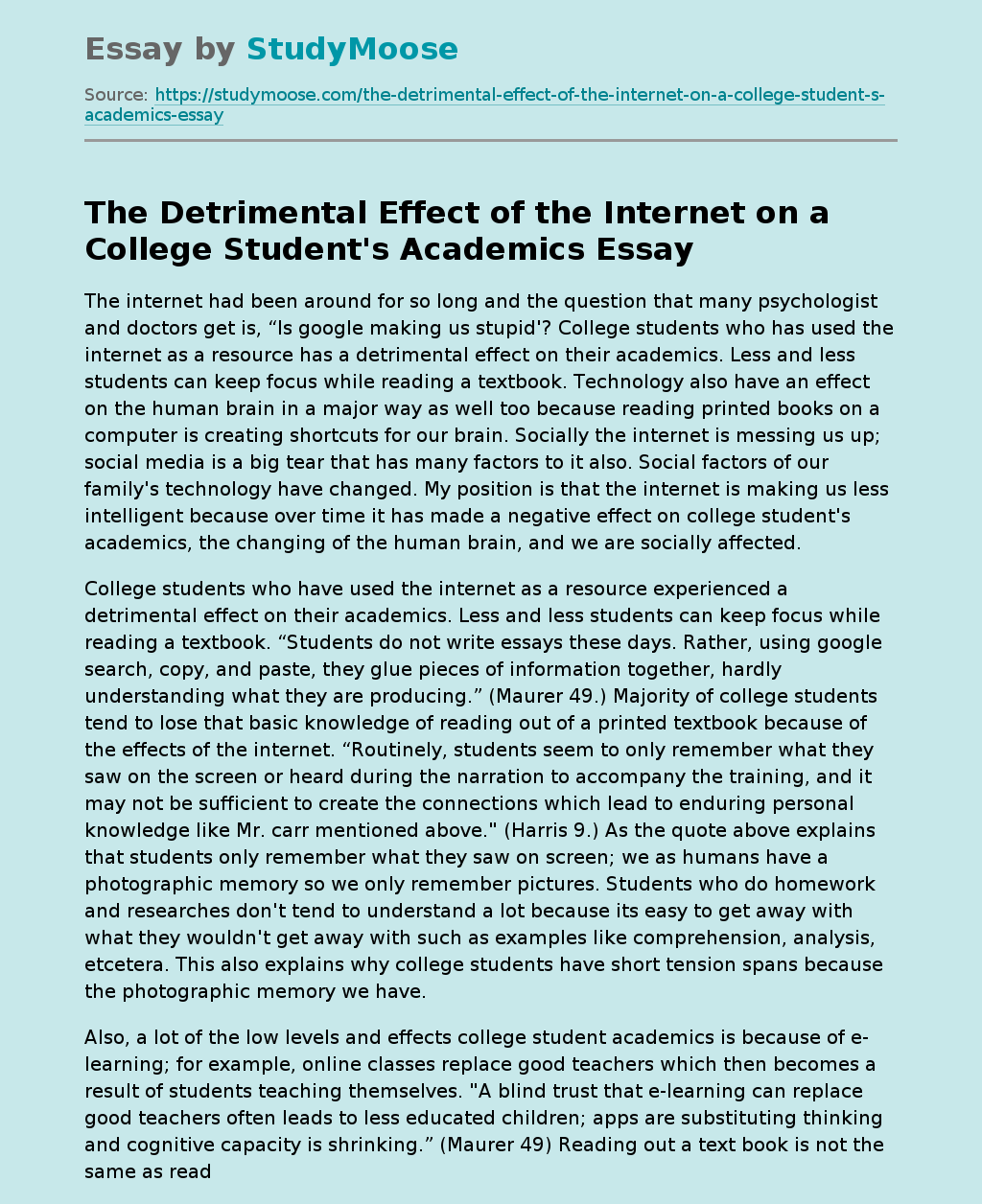