The Depiction of 1970’s Technology in “Young Lions” in Edward P. Jones’ “Lost in the City”

‘Lost in the City’ is a collection of short stories, written by Edward P. Jones, that depicts the everyday lives of African Americans in Washington D.C. set between the 1950’s to the 1980’s. The short story “Young Lions” illustrates a sequence of days in the life of the main character and professional criminal, Caesar Matthews. Caesar, a relatively young man, works part-time as a bartender for his acquaintance, Manny Soto, and lives with his very loving girlfriend, Carol. The story references different technological devices used for entertainment or communication in the time period.

Don't use plagiarized sources. Get your custom essay on
“ The Depiction of 1970’s Technology in “Young Lions” in Edward P. Jones’ “Lost in the City” ”
Get custom paper
NEW! smart matching with writer

This placement of products can help us understand what life for Caesar is like.

The most prominent device used for communication in the story is the telephone. Since Graham Bell invented the telephone in 1876 (www.greatachievements.org/?id=3625.), innovators in the 20th century expanded the telephone’s reach and accessibility. The Chesapeake and Potomac Telephone Company was founded in June 1883 and provided telephone service to Washington, D.

C. (https://en.wikipedia.org/wiki/C%26P_Telephone) Caesar is mentioned using the phone to call both his girlfriend and Manny. “He was still naked when the telephone rang, standing at the bathroom door…He never like Manny Soto calling his apartment…” (56) Having home-to-home phone access is a major success in the world of communication.

Another product mentioned in “Young Lions” is the Polaroid camera. Having an instant camera is a big deal in terms of entertainment. After 30 years of being invented, in 1929 by Edwin H. Land, Polaroid products were distributed in over 45 countries worldwide (polaroid.

com). “In the vestibule of Manny’s Haven at Georgia Avenue and Ingraham Street, there was an impressive collection of Polaroid pictures displayed behind a locked glass case.” (59) Manny, the owner and the subject of the Polaroids, seems to be popular for his instant camera. “Manny, always wearing a Hawaiian shirt, stood in the center, his arms around Washington politicians, two-bit celebrities, customers for whom he had a special affection, or wild-eyed, out-of-town relatives.” (59) Manny not only used his camera for fun with prominent figures and friends, he also used it for business purposes. “I got some pictures here you might be interested in…the proof from our man Polaroid that our man from Sixteenth Street has come up in the world.” (61) In 1963, Polaroid debuts Polacolor instant color film (polaroid.com). Despite not knowing weather or not Manny has color film, being an important criminal figure in the story, it makes sense for Manny to have some sort of photo capturing evidence.

Cassette tapes were also a big part of “Young Lions.” Sherman, Caesar’s influential old friend, is constantly listening to cassette tapes in his home. “Most of the time when Caesar and Angelo visited, they would find Sherman wrapped in his bathrobe sitting on the couch, listening to one of dozens of cassette tapes that Sanda had recorded of the children talking and playing with each other.” (67) Cassette tapes are magnetic tapes meant for recording and playing back audio. They come in two forms; either pre-recorded or blank with the option to record for yourself. By 1953, over one million homes in the United States had tape machines making them a popular form of entertainment. (wikipedia.org/compactcassette).

The technologies mentioned in “Young Lions” not only shaped the world but they helped shape the story. The diverse variety of devices used in the story shows readers how avid technology was in the 1970s. ‘Lost in the City’ has a multitude of other technologies in other short stories, however these resonant to be the most influential.

The Depiction of 1970’s Technology in “Young Lions” in Edward P. Jones’ “Lost in the City”. (2021, Aug 09). Retrieved from https://studymoose.com/the-depiction-of-1970-s-technology-in-young-lions-in-edward-p-jones-lost-in-the-city-essay 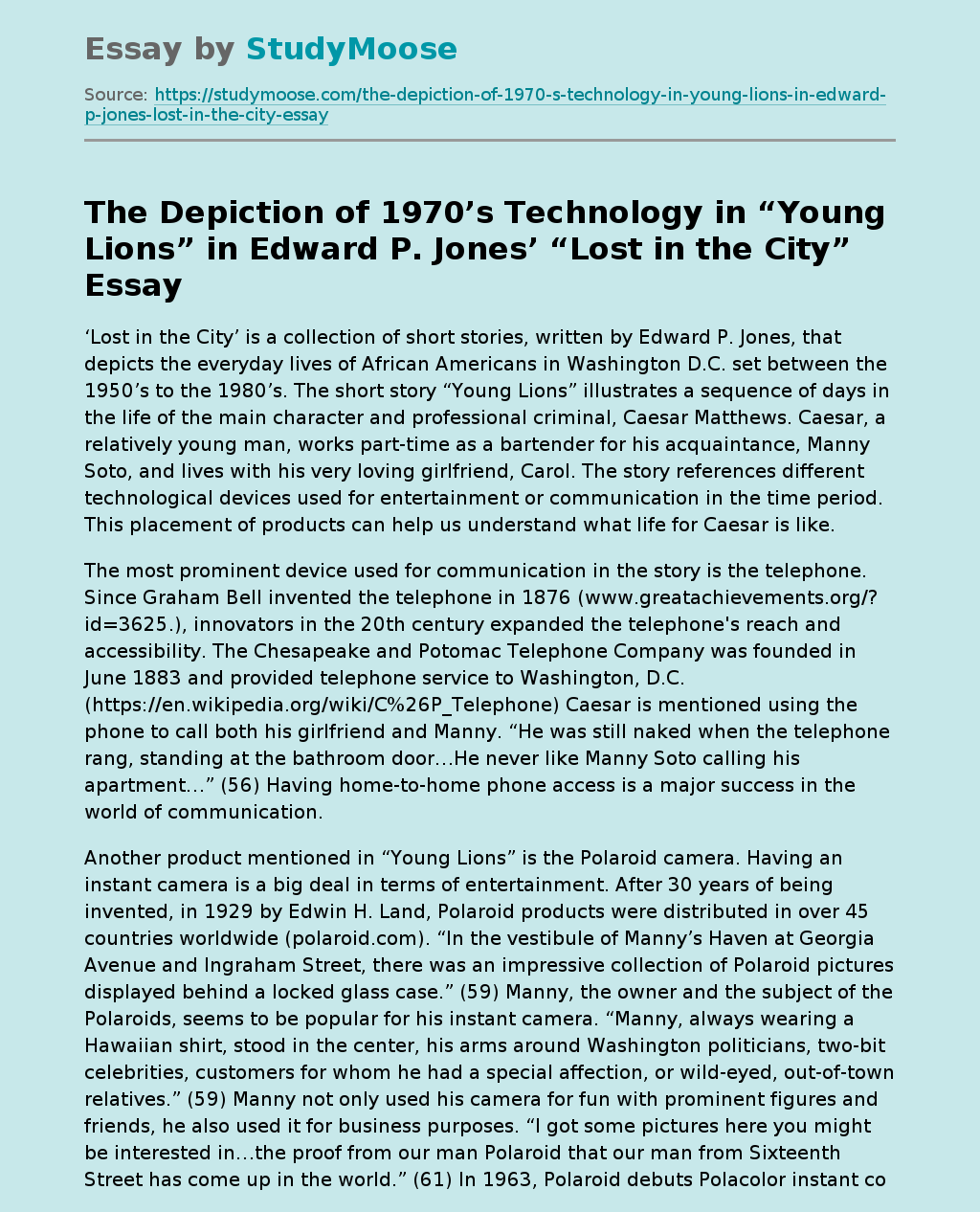