The Declaration of Independence (1776): Brief Overview

The declaration of independence was adopted by the continental congress on July 4, 1776, where the 13 colonies had cut ties with Great Britain. The Declaration was a summary of the colonists’ motivations for seeking their independence.

Don't use plagiarized sources. Get your custom essay on
“ The Declaration of Independence (1776): Brief Overview ”
Get custom paper
NEW! smart matching with writer

After several Acts were placed on the colonies, to help Brittan pay their debt that was caused by war. The colonist saw Great Britain as overreaching their power and believed to be treated unfairly and unequal, colonist believed they were being misrepresented and had no say in parliament. Americans were getting fed up with the policies set by the British like taxation without representation, not being able to vote, or influence policies in Britain, and they were not directly represented in parliament which they argued had no right to impose taxes on them.

There were protests and fights that broke out between the British and the American colonies throughout 1775 and 1776. This led the colonial governments to send their delegates to a continental congress in order to coordinate a boycott on British goods. On June 7, 1776, Richard Henry Lee introduced a motion in Congress to declare independence. Other members of Congress were amenable but thought some colonies not quite ready. However, Congress did form a committee to draft a declaration of independence and assigned this duty to Thomas Jefferson.

On June 11, 1776, Congress appointed a “Committee of Five”, consisting of John Adams of Massachusetts, Benjamin Franklin of Pennsylvania, Thomas Jefferson of Virginia, Robert R. Livingston of New York, and Roger Sherman of Connecticut, to draft a declaration (“Events Leading to the American Revolution”).

Thomas Jefferson took 17 days to write the Declaration of Independence, Jefferson’s draft of the Declaration of Independence, included eighty-six changes made later by John Adams (1735–1826), Benjamin Franklin (1706–1790), and other members of the committee appointed to draft the document. The Second Continental Congress spent two days making some changes to the document as well.

By far one of the most famous pictures in US history has to be that of This copy of an 1867 engraving by Waterman Lilly Ormsby, based on an 1818 painting by John Trumbull. It shows the Committee of Five who drafted the Declaration of Independence – Thomas Jefferson, John Adams, Roger Sherman, Robert Livingston, and Benjamin Franklin – presenting it to John Hancock, president of the Congress, in the Pennsylvania State House (Independence Hall) in Philadelphia.

On July 1, 1776, the Second Continental Congress met in Philadelphia, and on the following day (July 2, 1776) 12 of the 13 colonies voted in favor of Richard Henry Lee’s motion for independence that is when America Declared its Independence. It wasn’t until July 4, 1776, when John Hancock signed the declaration of independence and it was adopted by the continental congress.

Pictured right is a photograph of the Old State House in Boston Massachusetts where Bostonians gathered to hear the Declaration of Independence for the first time on July 18, 1776.

The Old State House is the oldest surviving public building in Boston it was built in 1713 to house the government offices of the Massachusetts Bay Colonies. The Old state house served as a merchants exchange on the first floor and the seat of the colonial and later state government on the second floor (“Old State House”, 2017).

Another significant event that took place here was the Boston Massacre it took place beneath the balcony of the Old State House in 1770 this event marked the first bloodshed of the revolution.

306 years later Bostonians and Americans from all over gather to hear the Declaration being read on July 4th from the balcony of the Old State House.

On June 14, 1777, the second continental passed the flag resolution.

The American flag was designed to represent the new union of the thirteen original states: it would have thirteen stripes, alternate red and white, and thirteen stars, white on a blue field.

The first flags had the stars arranged in a circle, based on the idea that all colonies were equal. The thirteen stripes, resting side by side, represented the struggle for independence; red stood for valor, white signified purity, and blue represented loyalty. Pictured right shows the raising of the first United States flag at Independence Hall in Philadelphia.

The Declaration of Independence (1776): Brief Overview. (2021, May 29). Retrieved from https://studymoose.com/the-declaration-of-independence-1776-brief-overview-essay 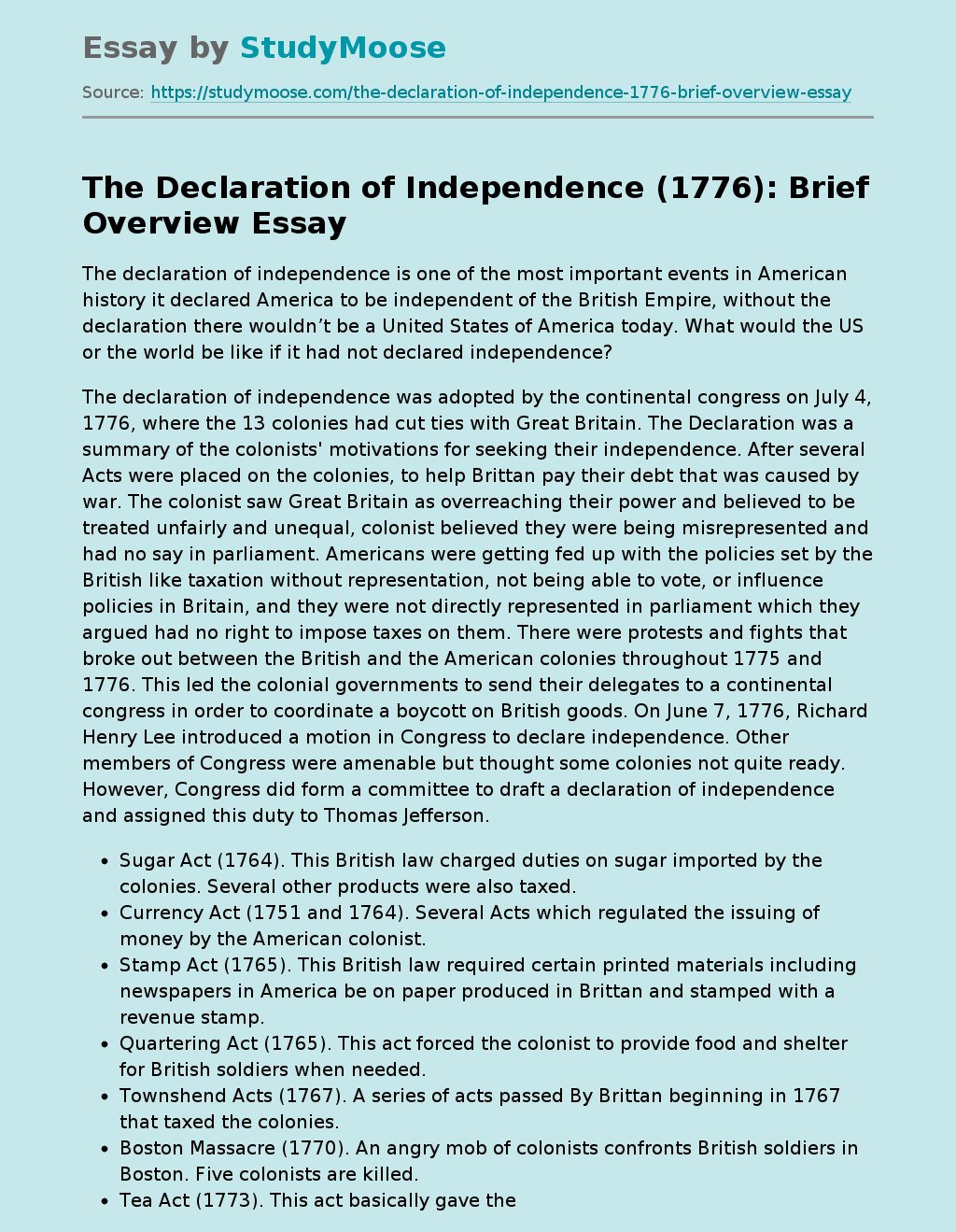