The Death Penalty is an Issue

The death penalty is an issue that has the United States quite divided. While there are many supporters of it, there is also a large amount of opposition. There are five different forms of execution in the United States: hanging, electrocution, lethal injection, lethal gas, and firing squad. All of these should be illegal. Capital punishment is defined as killing of someone for a crime. But also, murder is defined as killing one human being by another. Both are acts of violence.

Don't use plagiarized sources. Get your custom essay on
“ The Death Penalty is an Issue ”
Get custom paper
NEW! smart matching with writer

There is nothing more inhumane than tolerating the killing of another human being. According to the Abolitionists, capital punishment is nothing but an act of violence. There are 32 states with the death penalty, and they must change. These states need to abolish it on the grounds that it carries a dangerous risk of punishing the innocent, is cruel, and for religious reasons. The United States needs to abolish capital punishment in the states that allow it.

First reason the death penalty should be abolished is because the risk of punishing somebody innocent. “We’re only ­human, we all make mistakes,” is a commonly used phrase, but it is tried and true. Humans, as a species, are famous for their mistakes. However, in the case of the death penalty, error becomes too dangerous a risk. The innocent lives that have been taken with the approval of our own government should be enough to abolish capital punishment.

The wrongful execution of an innocent person is an injustice that can never be rectified. There’s always the chance of the innocent being in the wrong place at the wrong time. A handful of evidence from a strong lawyer could sentence someone to life in prison, and even the death penalty. One could be spending and ending his life in captivity for simply walking down the wrong street on the wrong day.

That person does not deserve to serve the time that’s not rightfully his. It’s a small fault in the justice system that is not easy to overcome. In the case of the death penalty, error becomes too dangerous to risk. The innocent lives that have been taken with the approval of our own government should be enough to abolish capital punishment. Another reason to abolish the death penalty is because it is cruel. Many people favor the death penalty because it helps families get over the wrong done to the family; however, in most cases, closure is not the result. Losing a loved one, no matter how that person is lost, is unbearable. Pain like this is shocking and the victim’s family holds onto the hope that the execution of the murderer will bring relief and closure. Nevertheless, when execution day arrives, the pain is not eased.

No relief can be gained, for their pain is an unavoidable, natural process of life. They believe that they are different from those who have taken their loved ones and they demonstrate their ­difference by refusing to sink to a murderer’s level. According to Edna Weaver, whose daughter was murdered in New Jersey, expressed relief that the defendant was spared the death penalty. She said that she did not want William Severs Jr. executed for killing Tina Lambriola in 2002 because she wanted to spare his mother the pain of losing a child. “I’m so thankful it came out the way it did. . . . I wouldn’t want another mother to feel like I do — it’s a feeling I could never put into words. . . . At least his mother will be able to write to him, she will be able to send things to him,” Weaver stated.

Finally, the last reason they should abolish capital punishment is because religious reasons. Many religions, such Catholicism, follow the rules that God sent to use through the Ten Commandments. One of the most important of those ten states, “Thou shall not kill.” If you are executing an individual, that clearly violates this commandment. Murdering any person, no matter what the individual has been convicted of, is a mortal sin. In the Old Testament; the Lord said that it is okay to give a man Capital punishment if he has committed serious crime.

Then in the New Testament he said we should not take the life of another man but if that man disobeys the laws of his country then he shall be punished equally according to what he had done. With the many advances that society has made, executing people for crimes the person may have or may not have committed is still practiced. It violates so many religious beliefs. It is a cruel and unusual practice that must be done away with. Society must advance and eliminate the death penalty. We need to understand that the best way to prevent any possible murders in the future is not let the killer walk free. Nothing good comes of hate, and nothing good can ever come from capital punishment. It cannot continue to be accepted by a nation that claims to have liberty and justice for all. The death penalty is murder on the sly and it’s dead wrong.

The Death Penalty is an Issue. (2016, Sep 19). Retrieved from https://studymoose.com/the-death-penalty-is-an-issue-essay 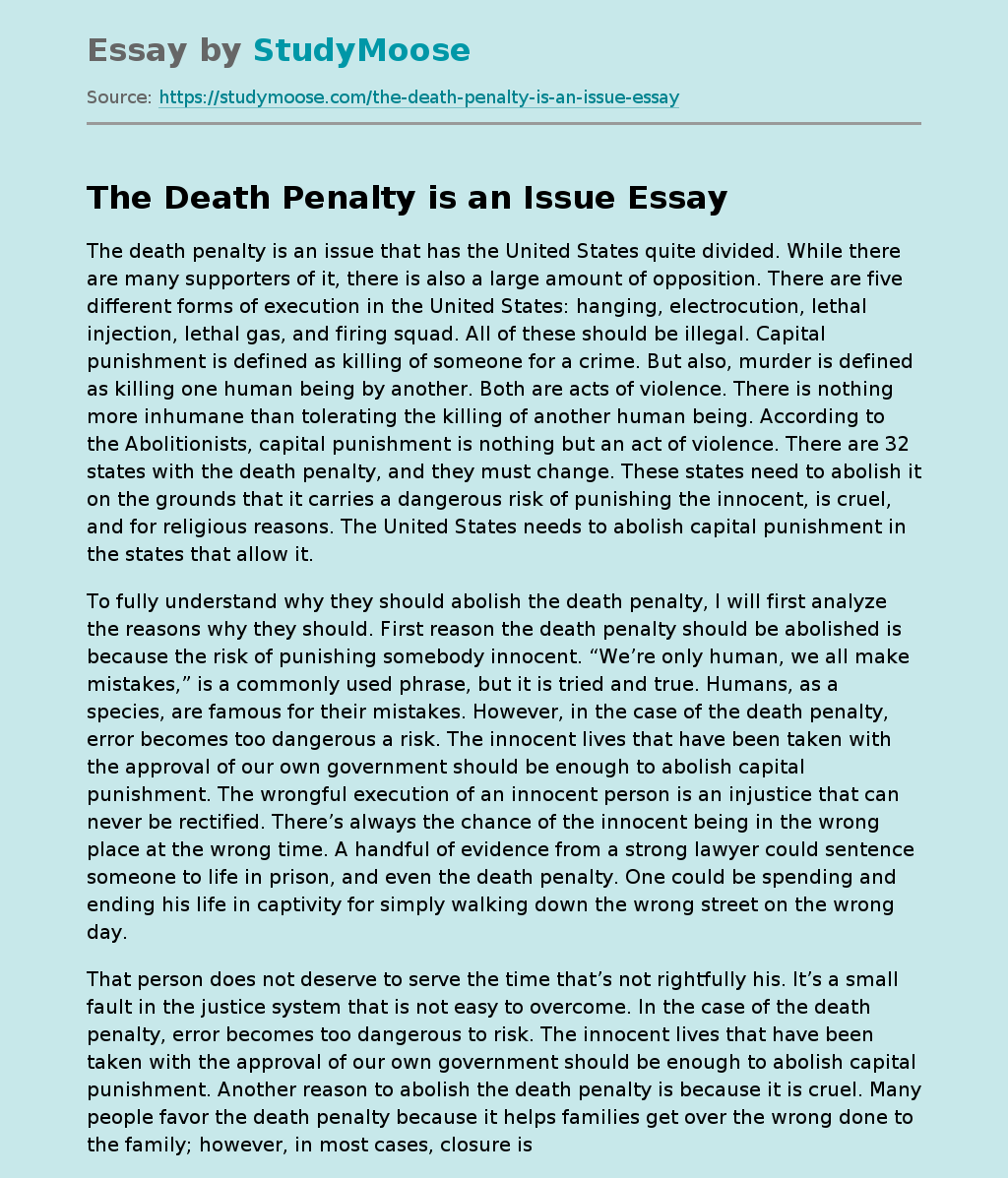