The Death penalty a capital punishment

The Death penalty, a capital punishment given by the government as a repercussion for a serious crime. First laws established in 1608, until this day in age which has given people time to decide if that’s a inhumane action to torture criminals. One of the most treacherous criminals that deserve the death penalty is named Richard Kuklinski. This cold hearted monster has killed roughly 250 people during his time with the mafia. When he would execute a person, Kuklinski never felt remorse or had any emotion toward the action.

Don't use plagiarized sources. Get your custom essay on
“ The Death penalty a capital punishment ”
Get custom paper
NEW! smart matching with writer

He felt the need to kill due to his violent temper which he couldn’t resist.

Even though Richard Kuklinski did gruesome crimes some may sympathize because it was all triggered by his parents that would abuse and torture him and his sibling. His horrible childhood still doesn’t fully explain why a person could be so uncaring and heartless. Due to his actions this has led him earn a spot on death row.

Richard Kuklinski, the most notorious criminal of all times killed roughly 250 people Including innocent people and “rats” doing dirty work. He showed signs of abuse at a early age when he would kill cats and tie their tails together. Kuklinski committed his first crime at the age of thirteen. His first victim was Charlie Lane also known as his bully. Little did Kuklinski know that this was the first of many murders he was going to commit throughout his life. One of Kuklinski’s victim was Paul Hoffman. Both of the men met at a warehouse since Paul owed money for drugs.

Kuklinski claimed “the deal was a ruse”(HBO) which led him to shoot Paul under the chin and later beat him to death. Another Homicide was the case of Gary Smith who’s body was found under the bed at a York Motel.

Kuklinski had put cyanide in his hamburger and later strangled Smith with a cord. In a interview he claimed that one of his favorite methods was cyanide because it was “hard to detect on toxicology test and it would kill the person fast” (HBO). One of his famous murders was a man called Louis Masgay. He was shot in the head and was put in a freezer for 2 years until the body was dumped. Kuklinski used the freezer method a couple times and that’s how he got the name “Ice Man”. These are three of the five homicide he got convicted for and serving a life sentence.

Cold hearted, heartless, and inhumane are all the words that describe one of the worst person the world has seen, Richard Kuklinski THE ICE MAN. He has never felt any pain, sadness or even a rush when committing a execution. He was just like the corpse he would hide in his freezers. Cold, pale, and dead inside. He did in fact say “sex is my only adrenaline rush” (HBO) that was the only thing that gave him a rush. And of course, his kids and wife were the things that made him actually seem like a half decent person with some kind of feelings towards a human. Kuklinski made killing so normal for him that he wouldn’t feel like anything happened. “it doesn’t bother me. It doesn’t bother me at all. I don’t have a feeling one way or another.” (HBO) He may have had no remorse for all the men that he killed, Kuklinski did have two rules. No children, and no women EVER. Now people may ask. Why would someone go around killing people and have no care or emotion In the world? Well, nobody knows exactly.

The Death penalty a capital punishment. (2019, Dec 19). Retrieved from https://studymoose.com/the-death-penalty-a-capital-punishment-essay 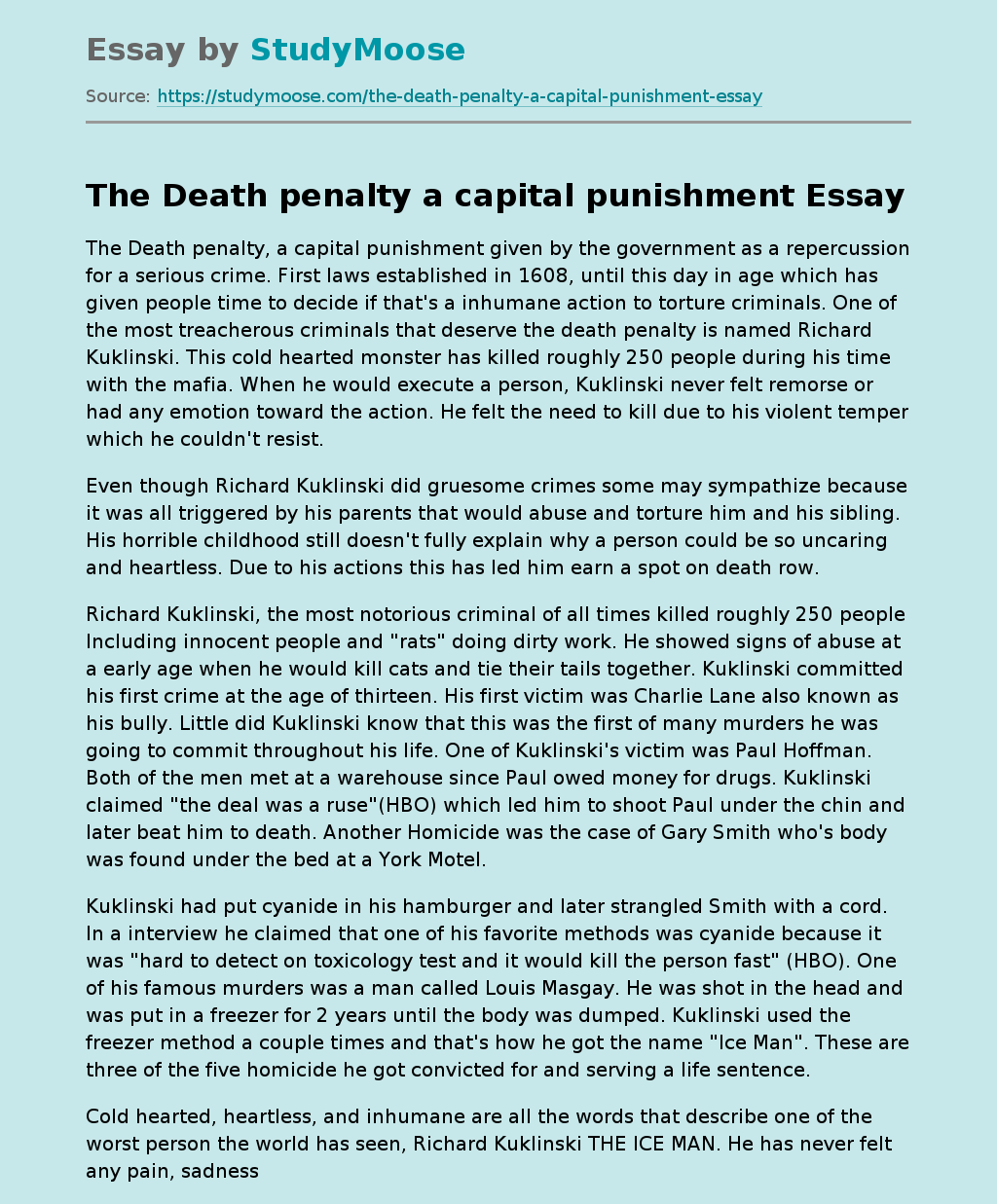