The Darkness of Night and Hope

The Holocaust happened in the year 1941. By 1945, two thirds of the jewish population horrifically vanished. Elie Wiesel was almost 16 years old when he was brought to the Auschwitz concentration camp. Night refers to the darkness of life, mind and soul experienced by all who suffered in Nazi concentration camps during WWII. In the memoir Night by Elie Wiesel, the main character vs. Nazi’s conflict causes additional character vs. society and character vs. self conflicts which develop throughout the book.

Elie learns to deal with the Nazis.

Don't use plagiarized sources. Get your custom essay on
“ The Darkness of Night and Hope ”
Get custom paper
NEW! smart matching with writer

This type of conflict is Elie vs Nazis. When the Nazis first come to Elie’s town they are not as bad as the Jews think they are be for instance “German soldiers with their steel helmets and their death’s-head emblem. Still, our first impressions of the Germans were rather reassuring. The officers were billeted in private homes, even in Jewish homes. Their attitude toward their hosts was distant but polite. They never demanded the impossible, made no offensive remarks, and sometimes even smiled at the lady of the house”(Wiesel 9,10).

This quote is saying that the Nazis are nice and not scary but kind. Elie soon sees how things change for example “the Germans arrested the leaders of the Jewish community”(10). This shows that the Nazis are cruel and sadistic like they are said to be.

Elie deals with some characters. This type of conflict is character vs character. Elie has some troubles with Idek that involve his father to get beat.

Elie decides that he is not going to follow Ideks orders. It just so as happens, that Elie walks in at the wrong time “When I reached the back of the building, I heard sounds coming from a small adjoining room. I moved closer and had a glimpse of Idek and a young Polish girl, half naked, on a straw mat. Now I understood why Idek refused to leave us in the camp. He moved one hundred prisoners so that he could copulate with this girl! It struck me as terribly funny and I burst out laughing. Idek jumped, turned and saw me, while the girl tried to cover her breasts. I wanted to run away, but my feet were nailed to the floor. Idek grabbed me by the throat. Hissing at me, he threatened: “Just you wait, kid . . . you will see what it costs to leave your work . . . You’ll pay for this later . . . And now go back to your place . . .” ”(56, 57). Basically Idek wants to do things with this girl and so he moves all the prisoners away.

Another illustration of character vs character conflict is when Rabbi Eliahu loses sight of his son. “Rabbi Eliahu whispered,”It happened on the road. We lost sight of one one another during the journey. I fell behind a little, at the rear of the column. I didn’t have the strength to run anymore. And my son didn’t notice. That’s all I know where has he disappeared? Where can I find him? Perhaps you’ve seen him somewhere?” “No, Rabbi Eliahu, I haven’t seen him.” And so he left, as he had come: a shadow swept away by the wind. He had already gone through the door when I remembered that I had noticed his son running beside me. I had forgotten and so had not mentioned it to Rabbi Eliahu! But then I remembered something else: his son had seen him losing ground, sliding back to the rear of the column. He had seen him. And he had continued to run in front, letting the distance between them become greater.” As a result Rabbi Eliahou’s son ditches his father.

Elie has to deal with himself sometimes. This type of conflict is character vs self. When Elie is running in chapter 6 he has trouble coping with his life. “My father’s presence was the only thing that stopped me. He was running next to me, out of breath, out of strength, desperate. I had no right to let myself die. What would he do without me? I was his sole support.” In this quote Elie has trouble with the fact that he wants to die. He also doesn’t want to die because of his father’s sake.

Another instance of the character vs character conflict is when Elie doesn’t want to give up his soup to his father and then regrets having those feelings. “We were given soup. When they allowed us to return to the blocks, I rushed toward my father: “Did you eat?” “No.” “Why?” “They didn’t give us anything . . . They said that we were sick, that we would die soon, and that it would be a waste of food . . . I can’t go on . . .” I gave him what was left of my soup. But my heart was heavy. I was aware that I was doing it grudgingly. Just like Rabbi Eliahu’s son, I had not passed the test(107). In other words Elie gets soup. He doesn’t want to give it to his father. Consequently he thinks he betrays himself.

The conflict of Elie vrs. The Nazi’s reveal that human beings can be truly evil. The conflict character vrs. Character also reveals darkness of our hearts. The conflict character vrs. self reveals that until our very last breath we can endure hardship and suffering beyond what we think we can endure. Equally as important, the conflict character vrs. Self reveals that even under the worst conditions human nature is able to show compassion and empathy to one another out of love. Similarly, the author of The Hiding Place by Corrie Ten Boom is a novel about her experience during the Holocaust; because of Corrie’s sister Betsy’s faith, she holds onto her faith and clings to hope. In conclusion, the title of the book, Night, refers to the darkness of life, mind and soul revealing how our perspective of our circumstances can color our perception, without faith people lose all hope .

The Darkness of Night and Hope. (2021, Dec 02). Retrieved from https://studymoose.com/the-darkness-of-night-and-hope-essay 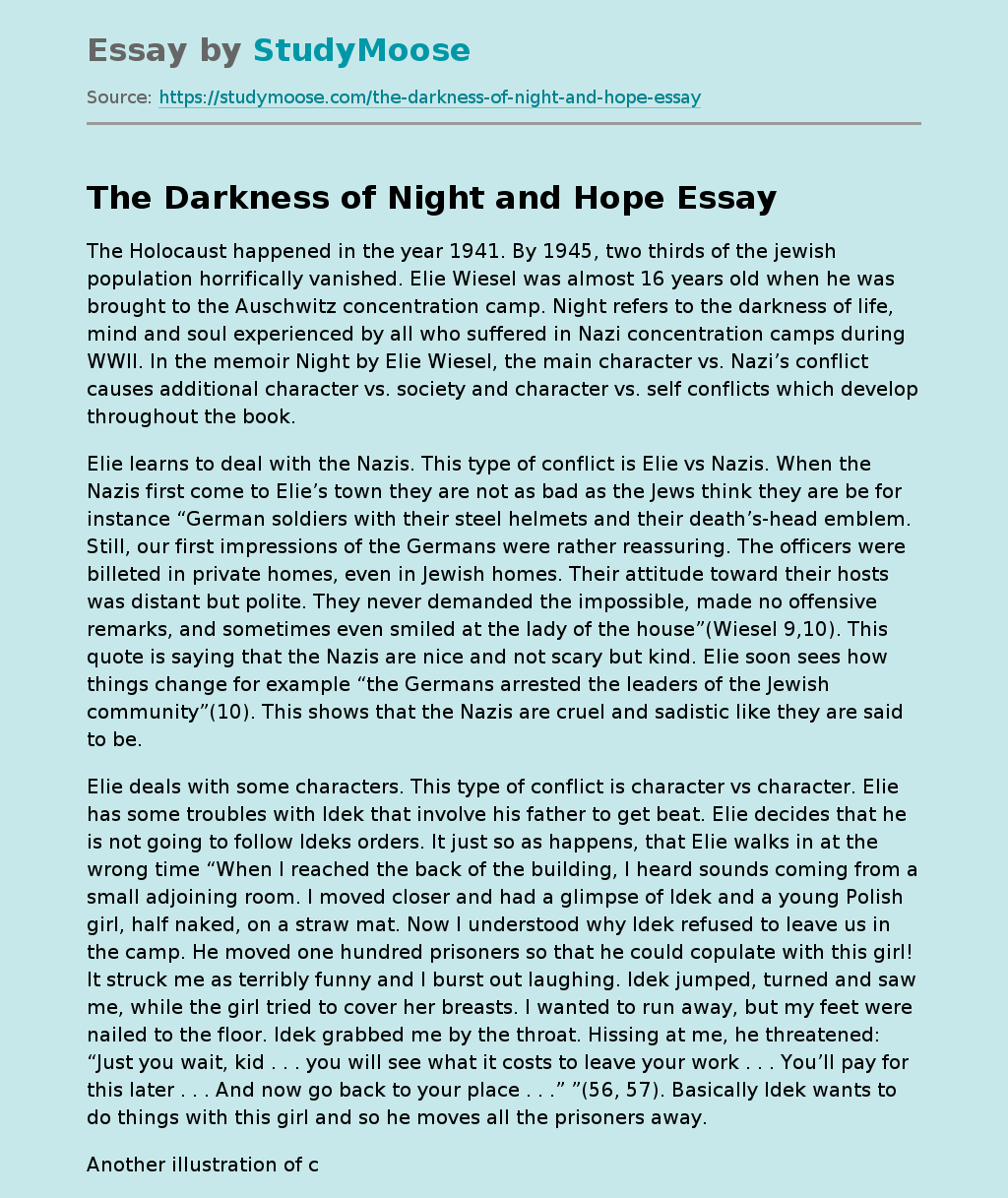