The Culture of Reality Shows

Don't use plagiarized sources. Get your custom essay on
“ The Culture of Reality Shows ”
Get custom paper
NEW! smart matching with writer

To say that people don’t watch reality shows would be an understatement. Just look for example of the net worth of Kylie Jenner. She is part of the show, ‘The Kardashians’. Kylie Jenner has a net worth of over nine hundred million dollars. This wealth is mostly from her make up line. If it weren’t for her presence on the show, her net worth would not be this vast.

Young people, especially young girls, watch the show and want to be like the starts they see on TV. It is virtually impossible for any of the viewers of this show to live the lifestyle if its stars.

The media and the culture of reality shows have the potential to shape the values and norms of society. In today’s society, the role of the celebrity is particularly disturbing to me. The Kardashians are an American family with their own TV show as mentioned earlier.

(‘Keeping up with the Kardashians’). As such, they are an example of the mass media of ‘reality TV’ and the celebration of the celebrity. In addition, the Kardashians are the measuring stick of the reality show culture because their show and lifestyles reflect twisted values, and superficiality. Viewers, especially young viewers want to imitate the stars of this show. They think it is normal behavior to act like the Kardashians. It’s Not! The shows stars are constantly on the cover of magazines and are the subjects of many news cycles.

Another reality show that can’t be good for young viewers is Big Brother. In this show sex is used as a way of winning. The more sex you can have the better your chances are. What is this type of behavior teaching our society and especially young people. There are cameras set up throughout a house where the contestants live. There every move can be watched live. This exposes viewers to the shows content. The main damage I feel is the way relationships are being formed. This shows a whole generation that you can use people to get what you want. Bullying is also on Big Brother. Can this be partially to blame why we have a bullying problem in our schools?

Shows like Big Brother and The Kardashians are not scripted. But shows like WWE (World Wrestling Entertainment) are highly scripted. Current viewership is approximately three million viewers per show. This show involves sexy woman, bullying, and violence. Something every parent wants their kids to see! This may be a reason why we have so much violence in today’s society.

There are many examples of violence on the reality show and their ratings. A slap here, a table flip there, and if we’re lucky, an all-out brawl — violence was once just a scene-stealer on today’s reality shows, but it now has become a part of some stars’ real lives. When violence breaks our on a reality show the ratings go through roof. Jayde Nicole, a former star on the MTV reality show “The Hills” and Bravo’s “Holly’s World” admitted she has made a good living by being bad on camera. “Now that are so many reality shows out there, they have to step up their game,” she said. “Make it more interesting, more dramatic and more outrageous just to capture people’s attention. It’s kind of just a ‘wow’ factor. “The 21-year-old Nicole, a former Playboy Playmate, said her nasty temper earned her the nickname, “bunny with fangs.” (Canning)

Some reality shows have no violence and can be quite good for the people watching. One show, ‘American Idol’ is a great show to watch. Ordinary people are given a chance to show the judges their talents. Some of the show’s winners have become superstars. The show has been on the air since 2002 and continues to be broadcast. On the last episode of Idol, 7.8 million people watched the show. And that was just in the United States. Idol has a world-wide audience.

The last show I will talk about is Fear Factor. This show asks contestans to do things that are fearful for most people. For example: You drive a car through fire then the car plunges into a lake. You are strapped in and have to unstrp the seat belts to get out. Once you do this you are required to swim to a designated point and grab a flag. You are timed and competing against other contestants who will do the same stunt. Another thing they ask constestants to do is eat something that we would never eat on our own. One of the episodes asked people to eat the eyeballs of a goat. You couldn’t just swallow it, you had to bite the eye ball and swallow it without spitting it back up. If you are able to complete all the tasks, and you have a quicker time then the other contestants, you win a cash prize.

The disturbing face of these shows is they are shaping peoples minds of what reality is. Many times the reality of the show is not a reality the majority of people can do or attain. We live in a culture that is being shaped by reality stars. If the producers of the reality shows could make them more realistic to what people are actually going through, I think people would watch them in even greater numbers. Young people are easily influenced by these shows. Adults can make up their own minds about what is real and what is fake. Parents need to take a more active role in their child’s lives and monitor what they are watching on television and their cell phones.

The Culture of Reality Shows. (2019, Nov 20). Retrieved from http://studymoose.com/the-culture-of-reality-shows-essay 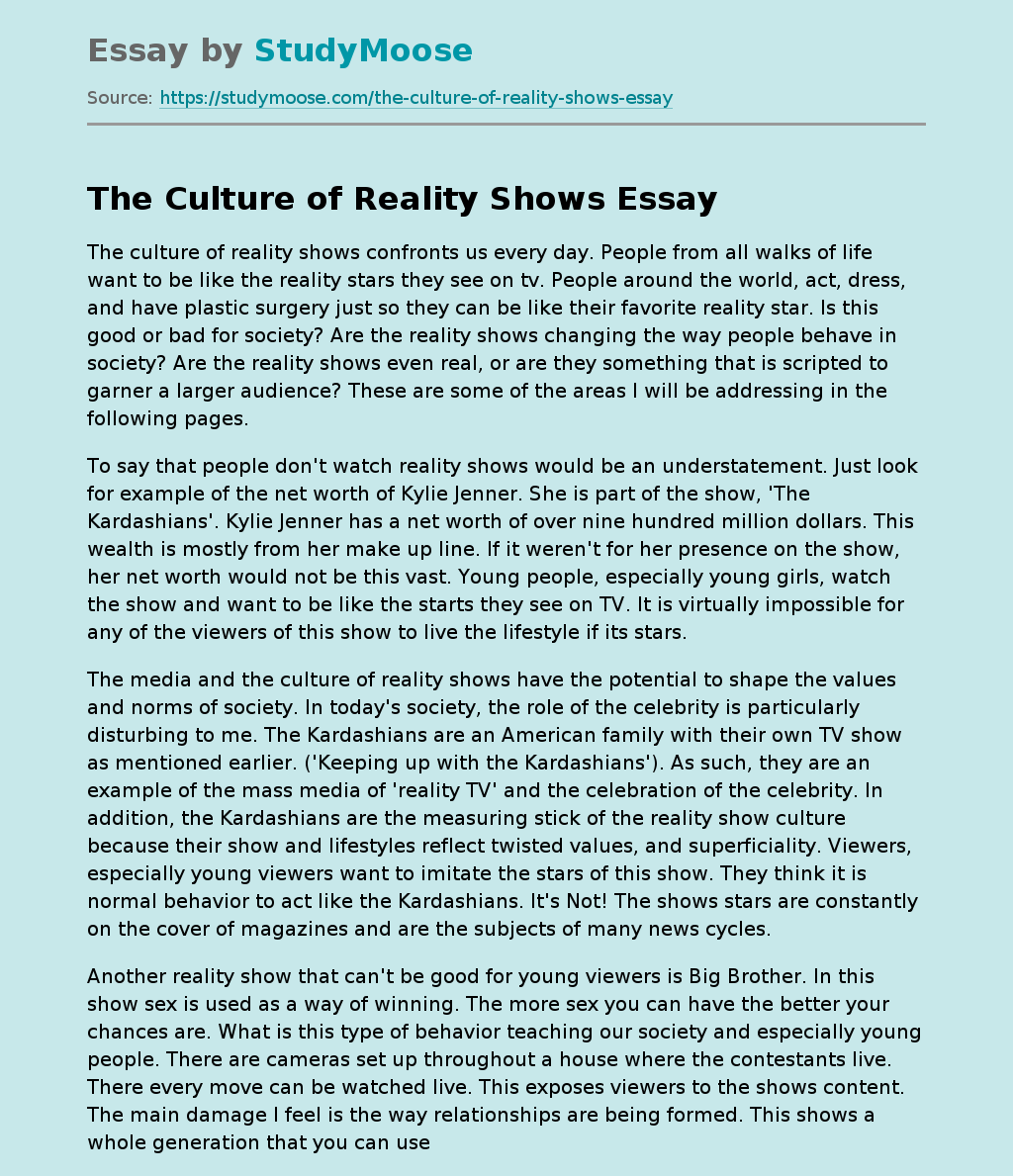