Despite the affair that John has carried out, Elizabeth remains calm. The audience know this because Elizabeth’s responses are equable, when John asks, “Are you well today? ” and she replies, “Aye. “, this shows that Elizabeth is calm because she is hurt and angry inside, but she still talks to John in a calm and peaceful way. One reason for Elizabeth to remain calm is that she does not want to cause friction between herself and John. In these times, the idea of divorce was not entertained in the slightest, and this could be the main reason that both John and Elizabeth are trying to continue as usual without friction.

Don't use plagiarized sources. Get your custom essay on
“ The Crucible & Miller ”
Get custom paper
NEW! smart matching with writer

Miller has made it clear to the audience that John wants to please Elizabeth with the line, “I mean to please you, Elizabeth. “. John’s words are proven to the audience within the stage directions, “He reaches to a cupboard, takes a pinch of salt, and drops it into the pot.

” John later says, “It’s well seasoned. “. John seasoned the soup but let Elizabeth take the credit for it. We can also tell that Elizabeth is trying to please John because when John receives the soup Miller has added, “she sits, and watches him taste it.

Their main duty was to care for the husband, look after the house and cook. When John tells Elizabeth that the soup is well seasoned, Elizabeth “blushes with pleasure” which could suggest to the audience that John’s compliment was unexpected, which could be a sign that John does not usually give Elizabeth compliments.

John giving Elizabeth a compliment just because of what has happened would add to the awkwardness between the two. When John, “goes to her, he kisses her. She receives it. ” suggests that John is trying to atone for his affair with Abigail. Elizabeth only “receives” the kiss, which could tell the audience that Elizabeth had not fully forgiven John, she does not reject the kiss completely which again shows that she does not want to create friction between herself and John.

Miller includes this kiss because it gives the audience a clear message about the state of John and Elizabeth’s relationship and if John’s efforts to please Elizabeth have worked. John mentions to Elizabeth, “Cider? ” and “You ought to bring some flowers into the house. ” John is trying to gently remind Elizabeth of her duties as a Puritan wife. She has forgotten but he does not want to seem as if he is ordering her about. John’s gentleness could suggest that he is afraid that all of the building tension between himself and Elizabeth could explode and become an argument.

Elizabeth’s reaction is complete embarrassment because they are both simple duties for a Puritan wife and Elizabeth has forgotten both of them. Elizabeth seems to be trying to please John too much which has resorted to her becoming flustered. Something is still lingering in Elizabeth’s mind which is either the affair or the accusations of witchcraft in Salem. The audience notice that Elizabeth is trying to please John too much and it could suggest that they are both trying too hard, which creates and awkward atmosphere is the room. 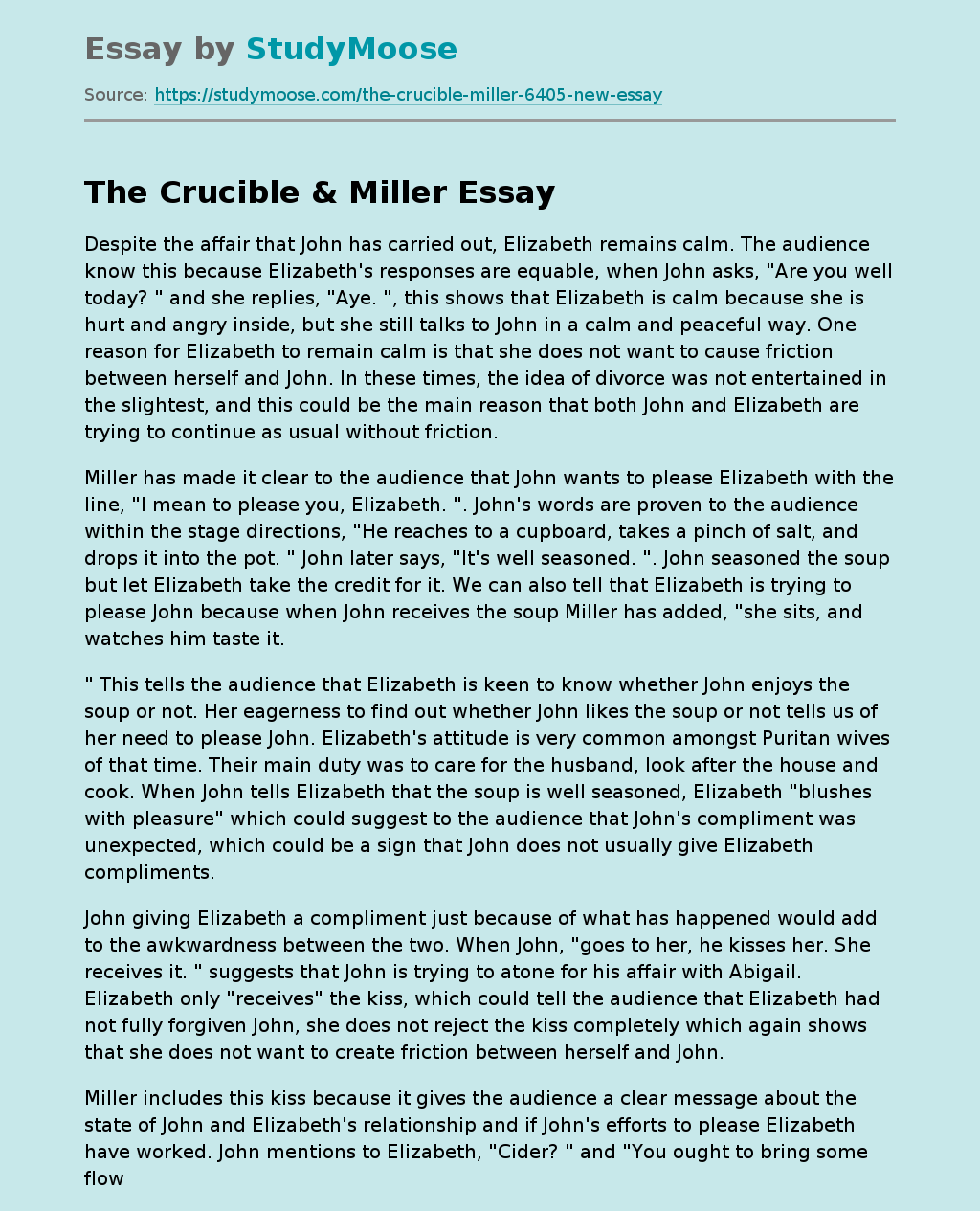