The Crucible By Arthur Miller - religion and puritan belief

“The Crucible” by Arthur Miller is set in the seventeenth century and involves the Puritan beliefs and religion. The characters in the play are very religious. Anyone who was considered to be a witch was condemned to death. This was because any sort of witchcraft was considered as worshiping the devil, which is totally against their faith. John Proctor was a farmer, and is married to Elizabeth. He is well respected in the town where the play was set. However, he has sinned because he committed adultery with Abigail Williams, niece of the local minister.

Don't use plagiarized sources. Get your custom essay on
“ The Crucible By Arthur Miller – religion and puritan belief ”
Get custom paper
NEW! smart matching with writer

The affair ceased once Elizabeth found out. On page 17 of the play, we see that Abigail is still in love with John by the way she says, “I am waiting for you every night” and “She clutches him desperately”. It gives the impression that this affair has given her great pleasure and she will do anything to get it back. She tries to seduce him into taking her back.

Examples of this are “softening” and “weeping”. This is trying to make Proctor feel sorry for her in return for his love. Abigail uses similes as she compares Proctor, “And you sweated like a stallion whenever I come near.

” The animal used in this context is seen as a very masculine figure, with great power. The reader can sense her feelings as this line is spoken with great passion. She hopes this will allure the affair to rekindle. She says, “I cannot sleep for dreamin’; I cannot dream but I wake and walk about the house as though I’d find you comin’ through some door”.

This is another of Abigail’s methods of enticing Proctor into resuming their illicit affair. The type of dialogue she chooses suggest that she is basically desperate for the romance once again.

She is even prepared to go to the lengths of calling Elizabeth Proctor “a sickly wife” to get him back. This also gives the impression that Abigail is extremely jealous of Elizabeth. While the sequence of Abigail selling herself to John ongoing, he has to try and prevent himself from anything happening once again. At first the reader would think John does not want anything to do with Abigail by the way Miller says “Setting her firmly out of his path”, and him saying ” No, no, Abby. That is done with”. This would give the impression that Proctor has no feelings for Abigail and he just wants to get her out of his mind.

Then again, the reader begins to feel suspicious when Proctor says that he “may have looked up” at her window. Also the way he only “gently” presses away from her “with great sympathy”. This might suggest that he is aware he has done wrong, but still does like Abigail. He just doesn’t want to risk his religion or marriage for an affair. This is demonstrated particularly when Abigail speaks of his wife. He says with anger, “You’ll speak nothin’ of Elizabeth! ” He starts to shake her when Abigail accuses Elizabeth. This obviously shows that he cares greatly for his wife, and will not allow anyone to speak badly of her.

The Crucible By Arthur Miller - religion and puritan belief. (2017, Oct 03). Retrieved from http://studymoose.com/the-crucible-by-arthur-miller-religion-and-puritan-belief-essay 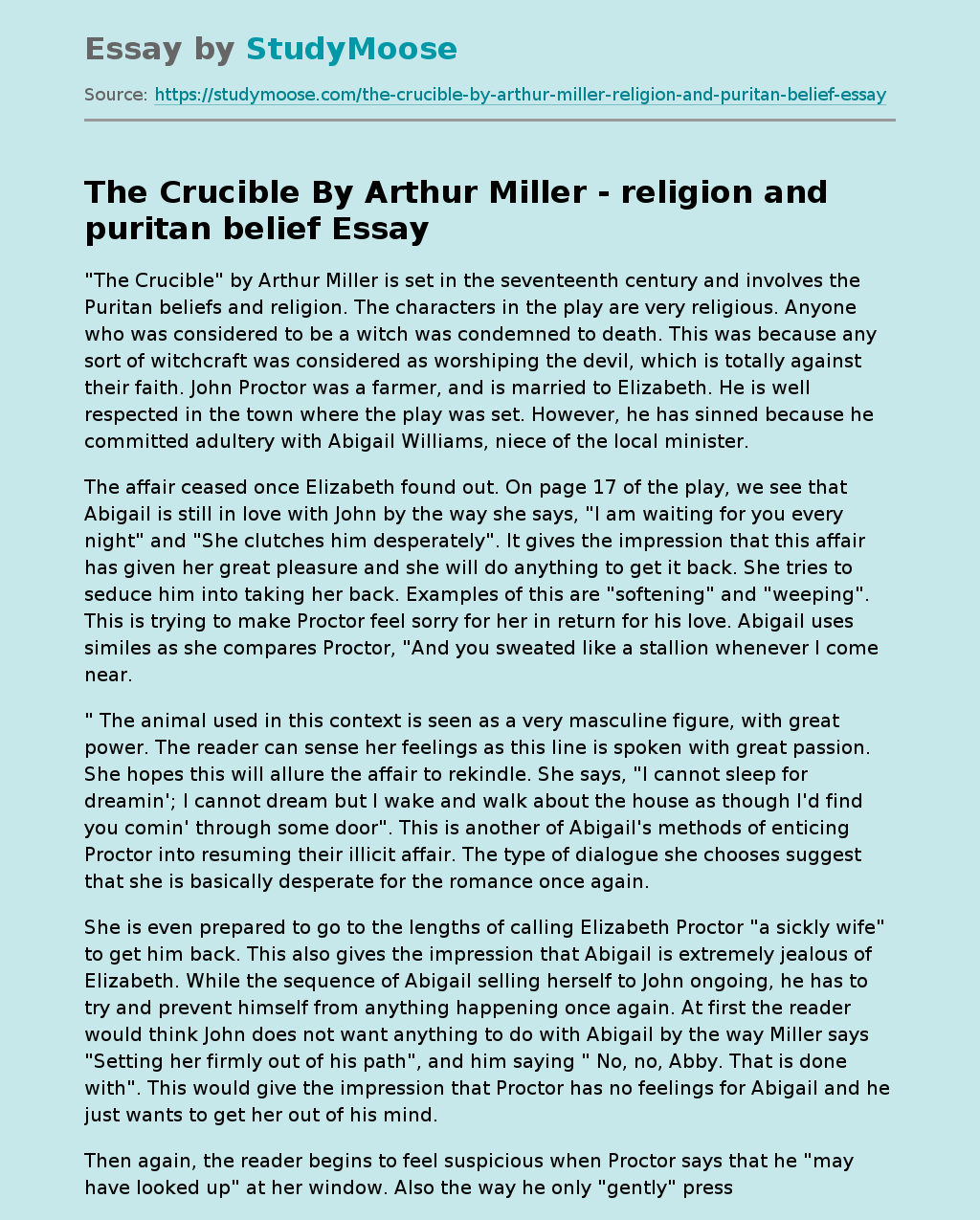