The Criminal Justice System and the Death Penalty

While some studies have found that there is some evidence that the death penalty may deter some, the death penalty serves as no deterrent, and many people that are being released from prison need rehabilitation services and employment showing that incarceration is ineffective. There is too much crime, at the same time, crime rates have decreased or stayed near notable lows, but the realization of crime is up, and the penal population has risen to unbelievable new heights.

“Incarceration impacts people from all walks of life and survey results show that families from every demographic group have been affected by the rapid expansion of the jail and prison population across the country” (Enns et al.

Don't use plagiarized sources. Get your custom essay on
“ The Criminal Justice System and the Death Penalty ”
Get custom paper
NEW! smart matching with writer

27). The Federal Bureau of Prisons reports that, “the cost of the American taxpayer’s money is approximately $20,747 per inmate per year.” Over the past two decades, nineteen states have successfully decreased both imprisonment and crime rates, using crime prevention, alternative-to-incarceration, and community correction approaches (Equal Justice Initiative).

Since the 1970s, incarceration in the U.S. has flourished and dramatically, and in fact, since 1990, the U.S. has added about 1.1 million additional people behind bars, almost doubling the nation’s incarcerated population (Brennan Center for Justice 3).

Increased incarceration has no effect on violent crime and may lead to higher crime rates when incarceration is concentrated in certain communities (Stemen 5).

The rates of incarceration have topped the rankings and it connotes an unjustness of the criminal justice system. The imprisonment rate has passed the multitude where any benefit to society or the advantages of prisons will be convective of the penal institution’s defects.

Not one part of the criminal justice system has brought down the crime rate. Prison is a central component of punishment that is outmoded and injurious for dealing with the rising crime rates. Long sentences and how criminal offenders are punished is closely related to the increased incarceration rate while the crime rates have declined even though they both are linked in some way. While reentry from prison is positively associated with crime rates, removal from the neighborhood is negatively associated with later crime (Clear et al. 111). “The experience of imprisonment may exert criminogenic effects by providing a criminal learning environment, by labeling and stigmatizing offenders as criminals or by constituting an ineffective way of addressing the underlying causes of crime” (Nagin, Cullen, and Jonson 127-128). Prisons provide little rehabilitative programming and often release individuals back to communities without proper support, leaving them vulnerable and likely to turn back to crime (Brennan Center For Justice 5).

Today, imprisonment has become a substitute in the fight against crime. Increased drug-related arrest, mandatory minimum sentences, and the speed of incarceration has quadrupled during the last four decades (The Growth of Incar.). In crowded prisons and jails, there are questions of safety within these institutions and it limits the effectiveness of incarceration. According to James Kilgore, “jails have played a key role in the rise of mass incarceration” (117). The United States penal population at 2.2 million is by far the greatest in the world which is slightly below one-quarter of the world’s population is detained in American prisons (The growth of Incar.). Don Stemen claims, “the impact of incarceration on crime is limited and has been diminishing for several years” (5). Despite recent declines, our jail and prison population are four times larger than in the year 1980 (Enns et al. 9). A prison is an important option for incapacitating and punishing those who commit crimes, but the data show that a long prison sentence does little to deter people from committing future crimes (Nagin 2).

The consensus blamed three-strike laws, mandatory minimum sentences, stop-and-frisk, and the rest of the anti-crime policy as the key factors in the crisis of incarceration (Gopnik par 2). The author also points out that, “John Pfaff has made the argument that another key factor was the prosecutorial overreach” (Gopnik). For decades, Louisiana locked up its citizens at nearly twice the national rate, many for nonviolent offenses, and for longer terms of serving sentences without the chance for probation or parole (Brangham and Woodruff). According to the article, “How the Incarceration Capital of America embraced Criminal Justice Reform,” said that the state of Louisiana has been the incarceration capital of America, in a country that incarcerates more people than anywhere else on Earth (Brangham). Modification in the sentencing, prison, and social policies are needed in order to reduce the certitude of the mass incarceration rate and pitfalls in the prison institutions that neglect the needs of modern society.

Question eight of the article, “The Death Penalty: Questions and Answers” has pointed out that, “capital punishment is a savage remnant of an uncivilized society, which is unethical in practice and unfair discrimination in practice”(4). “Most capital crimes are committed ill-considered, during emotional stress or under the influence of drugs or alcohol” (Death Penalty Info Center 4). Capital punishment relates to a prisoner who has been sentenced to death but has not yet been executed, and capital punishment refers to the actual execution. Capital punishment could be enforced only if guilt is decided by evidence, leaving no room for an alternative explanation of the facts. Even if it is presumed there is a possibility of innocent prisoners being executed, it must be that the troublesome trial led to the current punishment. Critics of capital punishment claim that it has no deterrent influence on crime, and wrongly gives the government the power to take a human life, also perpetuate social injustices by targeting people of color and people who cannot afford exceptional attorneys (Death Penalty).

The research on the death penalty has grasped the various consequences of the death penalty for deterring crime. However, many cross-state and cross-country studies that documented the results over the years have had a deterrent effect. Ernest van den Haag believes that, “the death penalty because of its finality, is more feared than imprisonment, and deters some prospective murders not deterred by the thought of imprisonment” (2). The death penalty is not a deterrent because most people that commit murder either do not expect to be arrested or never weighed the differences between a death sentence or life in prison before doing the crimes (Death Penalty Info 3). As a deterrent and a form of incapacitation, the death penalty helps to prevent future crime (Death Penalty Info Center 2). Morally, killing is wrong, and murdering on behalf of the state has been just as wrong, but the state gives a soldier the legal rights to kill in war, and if the police have killed someone or if a citizen in self-defense skills, it’s not called murder (Anderson 2). The source claims that “in the United States, since 1976, there have been 1,412 executions through 2015 and during this period there have also been 155 exonerations, findings of innocence in which the death sentence inmate was sent home” (Baumgartner and Lyman 69).

Crime permeates our social fabric, and it has because we are all deviant and deviance is an underpinning of criminality (Kinnard). According to David Anderson, the determining issue is that knowing that no state governed law is perfect and the guilty one is punished and justice will be served regardless of whether the defendant is a man or a woman, rich or poor, black or white, educated or uneducated (Arguments for Death Penalty 2). The article, “Where American Criminal Justice Went Wrong” implies that our system is merciless, destructive, and above all, unjust (Neyfakh 4). The article also said that, “the criminal justice became a clash of mandates and bureaucratic rules, it became unaltered from what was once its basic function: separating the guilty from the innocent and delivering a fair punishment to those who deserved it” (Neyfakh 13). The author implies that, “a just system must do more than protect the rights of the innocent; it must also respect the humanity of the guilty” (Gopnik). Brennan Center for Justice emphasizes that, “it is time to change our laws to reflect and serve our country’s current public safety needs” (6).

The Criminal Justice System and the Death Penalty. (2020, Sep 17). Retrieved from https://studymoose.com/the-criminal-justice-system-and-the-death-penalty-essay 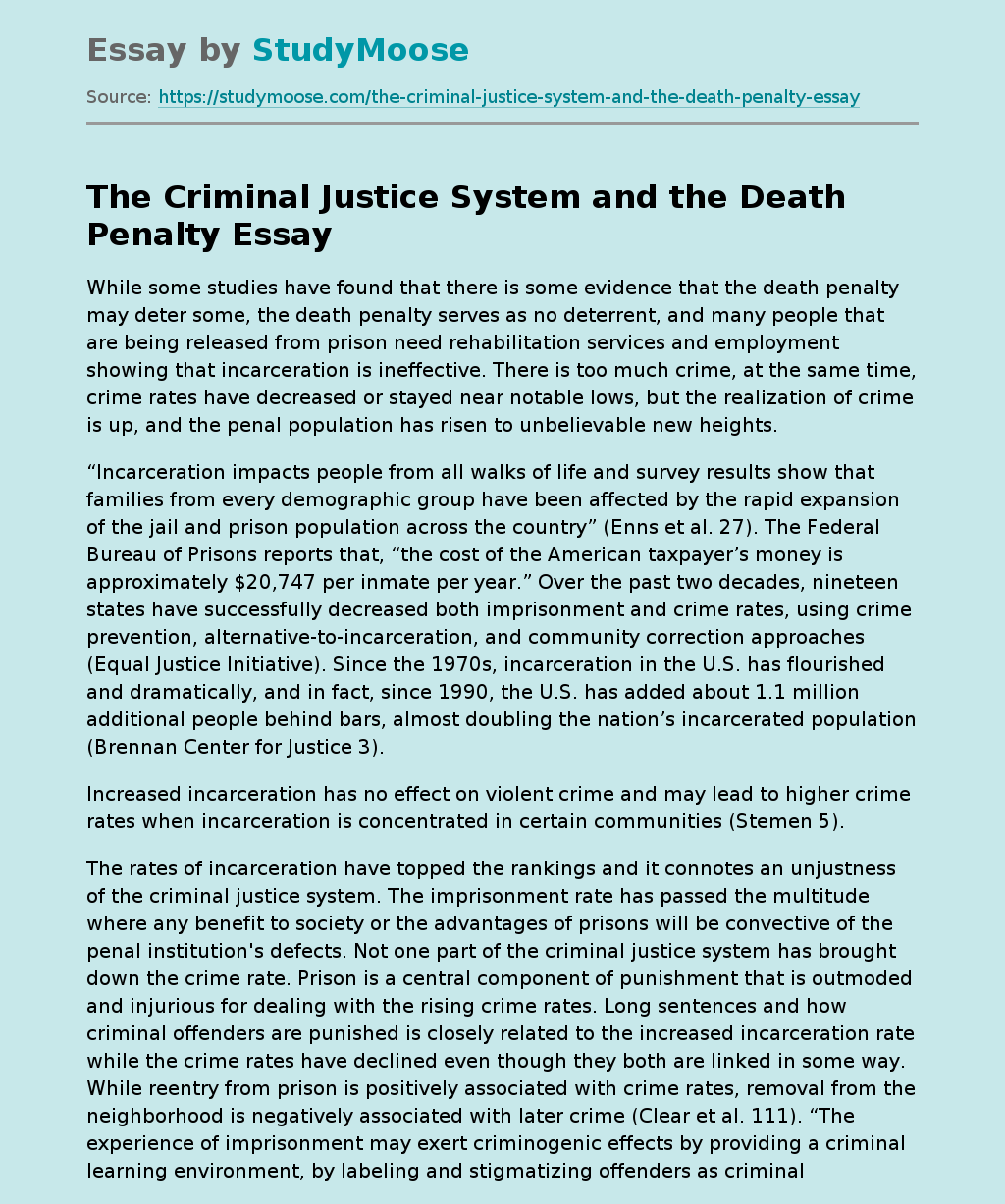