The Craft Breweries in Beer Wars

Beer Wars is documentary about the American beer industry and how the 3 largest US breweries try to drive out the competition. This documentary covers how lobbyists are used to control the beer market and drive out smaller breweries such as Dogfish Head Brewery, Stone Brewery, and Moonshot: all producers of craft beer. The documentary describes how a 3 tier system was put into place to separate the powers of selling beer and prevent a monopoly but the laws that were put into place to prevent the monopoly, infact, promoted the size and strength of the largest beer corporations.

Don't use plagiarized sources. Get your custom essay on
“ The Craft Breweries in Beer Wars ”
Get custom paper
NEW! smart matching with writer

An oligopoly was formed and maintained between Anheuser Busch, Coors, and Miller. Porter’s Five Forces Model is a business strategy that was covered in Beer Wars. Anat Barron described how difficult it was for small craft beer makers to be new entrants to the beer industry. When Anheuser Busch felt the least bit threatened, they had the capital and access to distribution channels that the smaller breweries did not have.

The craft breweries found it greatly difficult to compete with the big 3 because they were not a substitute for the Big 3’s product, they were a small competitor. Anheuser Busch controlled the bargaining power because they were able to keep prices down due to their size and pockets while small craft breweries had to be more expensive because of the quality and care that went into it on top of having to pay a higher rate for ingredients compared to the other large corporations.

To cite an example of the deep pockets that the big 3 had, Anheuser Busch came out with beer with caffeine in response to Moonshot beer, which was a craft beer (and the first of it’s kind). It can be viewed as theft but they had the pockets to Moonshot out. They targeted the bars and stores that carried Moonshot and gave them free cases of Anheuser Busch’s version of Moonshot beer. Though illegal some bars took it because it was free and busch had better prices to drive moonshot out.

The intensity of competitive rivalry was at an all-time high when it came to Anheuser Busch trying to weed out the smaller breweries. The big 3 breweries managed to control the market share through advertising on tv , sponsorships, and on the store shelves through strategic placement of their product. The three tier system that separates the powers of selling beer delves into how lobbyists are used to control the beer market. Anheuser Busch uses their deep pockets to get rid of competition from small craft beer makers and control consumer choice.

They purchase other beer corporations. Although only touched upon briefly towards the end of the film, Anat touched upon how Coors and Miller had to go into a 50/50 joint venture to compete with Anheuser Busch. Coors and Miller scanned the beer environment and realized that they could not keep a myopic view and hope for things to turn around. They knew that in order for each to survive, they needed to join forces. They were easier for Anheuser to take out individually but stronger as a whole.

The Craft Breweries in Beer Wars. (2017, Mar 04). Retrieved from https://studymoose.com/the-craft-breweries-in-beer-wars-essay 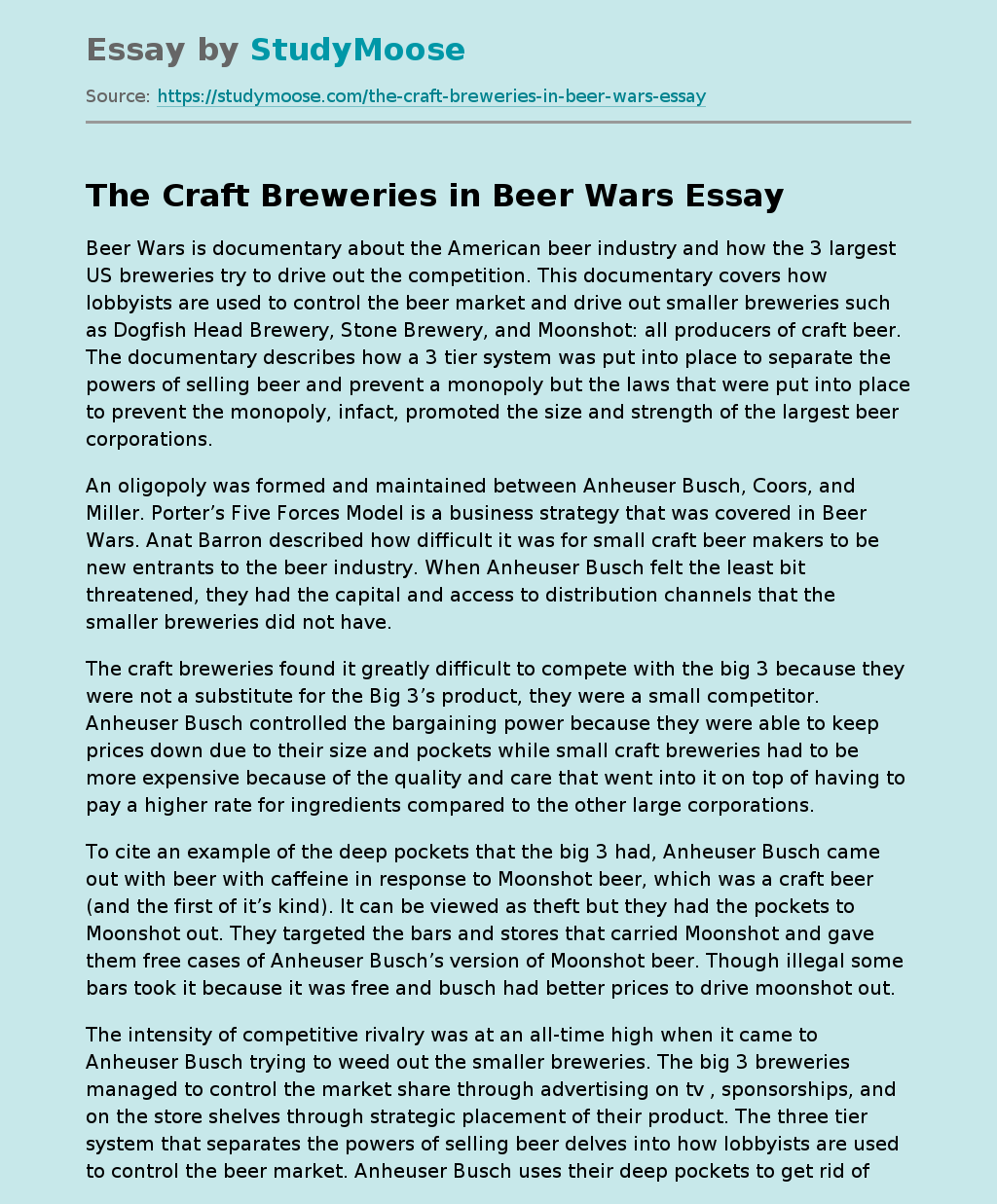