The Cost of Raising the Minimum Wage

The federal minimum wage was introduced in 1938 during the Great Depression under President Franklin Delano Roosevelt. It was initially set at $0.25 per hour and has been increased by Congress 22 times, most recently in 2009 when it went from $6.55 to $7.25 an hour. 29 states plus the District of Columbia (DC) have a minimum wage higher than the federal minimum wage. 1.8 million workers (or 2.3% of the hourly paid working population) earn the federal minimum wage or below. (2019) People think that just because they are making more an hour that they will have extra money.

Don't use plagiarized sources. Get your custom essay on
“ The Cost of Raising the Minimum Wage ”
Get custom paper
NEW! smart matching with writer

However, the wage increase will set off a chain of negative effects, businesses will shut down, the cost of living will go up, lay off’s and unemployment will rise and, it will decrease the motivation for people to want to do better in life and it will not help people out of poverty. If the research is done and all the negative effects thought about, it will show all the issues.

Therefore, raising the minimum wage will create more problems and do more harm than it will to help and should not be raised. A study from the National Bureau of Economic Research found that higher minimum wage adversely impacted small businesses, the Wall Street Journal reports. “As the federal minimum wage rose from 1989-2013, small businesses in affected states suffered lower bank credit, higher loan defaults, lower employment, a lower entry, and a higher exit rate”. (gale.com, 2019) What this means is those small businesses are not able to make loan payments and letting their businesses go under.

They can’t afford to employ people so there is a lower hiring rate and a higher job loss rate. Which is causing most small business owners to close their doors for good. It is not just small businesses that raising the minimum wage will impact. Even the larger companies will start to feel the effects. They will cut back on their hiring of unexperienced people because they will no longer be able to spend the extra money on training them.

Companies have a set idea of how much they want to spend on hiring workers, and they will evaluate how many people are actually needed to get a job done and only hire or keep those numbers. Higher prices can lead to less business, which means less income and therefore less money to hire and pay employees. When forced to pay workers more per hour, companies have to hire fewer workers or assign the same number of workers fewer hours to keep from going over their predetermined wage expense limits. Some companies will even investigate replacing humans with robots and electronics. Fast food restaurants such as McDonald’s and Wendy’s have already started to replace workers with technology, instead of giving their orders to a live employee at the counter, fast-food customers input what they want into a computer, which also accepts payment. When the cost of a fast-food hamburger increases to cover higher wages, many customers respond by not buying hamburgers. After all, most people don’t eat fast food because it’s delicious, they eat it because it’s cheap. When customers jump ship, companies struggle to stay in business. The food system provides a large number of jobs, particularly entry-level jobs for workers with few skills or experience. Because of this large share of low-wage, low-skill jobs, an increase in the minimum wage would disproportionately affect the employers and workers in the food system. (Hamrick, 1999)

When signing the bill that raised California’s minimum wage Governor Jerry Brown made these statements, “This hike will increase the cost of labor. Therefore, some jobs will be priced out of existence and some workers will be out of jobs.” He went on to say that unfortunately, those who will suffer most are the young and low-skilled, the very people such laws are meant to help. In 2014 Governor Brown said that raising the wage would in fact “put a lot of poor people out of work.” (McBride, 2017) Minimum wage jobs were meant to provide experience for our youth and low-skilled workers in the workforce. They are meant to train and teach them how to function in society and to earn extra money and responsibilities. They are meant to be steppingstones in the workforce. But instead, the raise will take away from them, their hours are being reduced and they are being made part-time. As a result, the unemployment rates will go up. The cost of products will go up to cover the cost of production, shipping and handling, and all the other costs that go along with manufacturing. The higher cost of goods and services may increase the poverty level. When the minimum wage goes up and inflation kicks in people will not be able to afford the things they need. Such things as food, child care, health insurance, rent, utilities, car repairs, and clothing. The hikes in minimum wage will cause employers to hire fewer workers and work them fewer hours. So, if they are already struggling and minimum wage goes up, then goods and services go up, most businesses will cut hours to save money but the cost of living will stay high and cause the majority of people to worse off than they are already. It also makes it harder for the unemployed to find jobs due to the hour cuts and layoffs. James B Sherk wrote, “A major reason why the minimum wage is such an ineffective antipoverty tool is that minimum-wage hikes cause businesses to reduce the number of workers they hire and the hours they ask or allow their employees to work. Workers who initially earn near the minimum wage experience wage gains. But their hours and employment decline, and the combined effect of these changes on earned income suggest net adverse consequences for low wage workers.” He also stated that though intended to help low-income families get ahead, the minimum wage instead costs some their jobs and other’s hours at work. This leaves poor families actually worse off. (Sherk, 2007) It is possible that a slow and steady increase over a period of time would benefit people but for a giant wage jump in such a small amount of time, it would not be good.

For those workers already making above minimum wage, the raise would be a good thing. They already have the skill and experience in that position that they more than likely will not be laid off or have their hours cut. Many who benefit from the minimum wage are second income earners, and therefore, the household is unlikely to be below the poverty line. A household with a single income earner just above the minimum wage is likely to be relatively poorer and they will not benefit from the minimum wage increase. Also, that still leaves the inflation of the cost of living that may affect them so, it will be like they didn’t get a raise. Found in an article written by Elizabeth Stelle she points out several good points like, in Maine, restaurant owner Randy Wadleigh worries the newly enacted $12 minimum wage, which goes into full effect in 2020, will drive prices up and customers on fixed incomes away. “Losing their business on top of higher wages will create the perfect storm for layoffs and other cutbacks as we struggle to make ends meet.” He has a right to worry, as a recent study from the Employment Policies Institute estimates the mandated wage hike will eliminate 3,832 jobs. But Governor Tom Wolf’s administration argues a higher minimum wage will raise $95 million in new revenue by reducing participation in the welfare programs and spurring job growth. These assertions are difficult to square with ample evidence showing minimum wage hikes eliminates jobs and harm the economy. However, The Employment Policies Institute found no statistically significant evidence that a higher wage reduces participation in means-tested welfare programs. In fact, modeling shows even more individuals may need programs like subsidized housing, as non-workers are even less likely to find jobs. (Stelle, 2017) Raising the minimum wage will cost the government more in payouts, simply because they will pay more housing costs and aide for utilities, more in food stamps to provide food for families that can not afford to provide for their families and health care expenses.

Although it is meant to try and help to raise the minimum wage has a number of serious and negative unintended results. Many people think that if they raise the minimum wage and they make more an hour that it means more money in their pocket. While this may be true for a short period of time, what they are not thinking about is that the inflation will catch up. Prices on goods and production will start to rise and make it harder for businesses to pay their workers and keep their doors open. When businesses start to close their doors for good, unemployment and poverty will rise. A lot more people then people living in poverty will feel the effects. Youth just starting out in the workforce and people making slightly above then minimum wage. This increase could even cause those people to sink into poverty. The cost of living will increase unlike the motivation of people to do better in life, and the number of jobs that decrease. Thus, creating more problems and doing more harm than intended and should not be raised. In the long run, the negative effects are horrifying and should be thought about at a seriously deeper level.

The Cost of Raising the Minimum Wage. (2021, Aug 02). Retrieved from https://studymoose.com/the-cost-of-raising-the-minimum-wage-essay 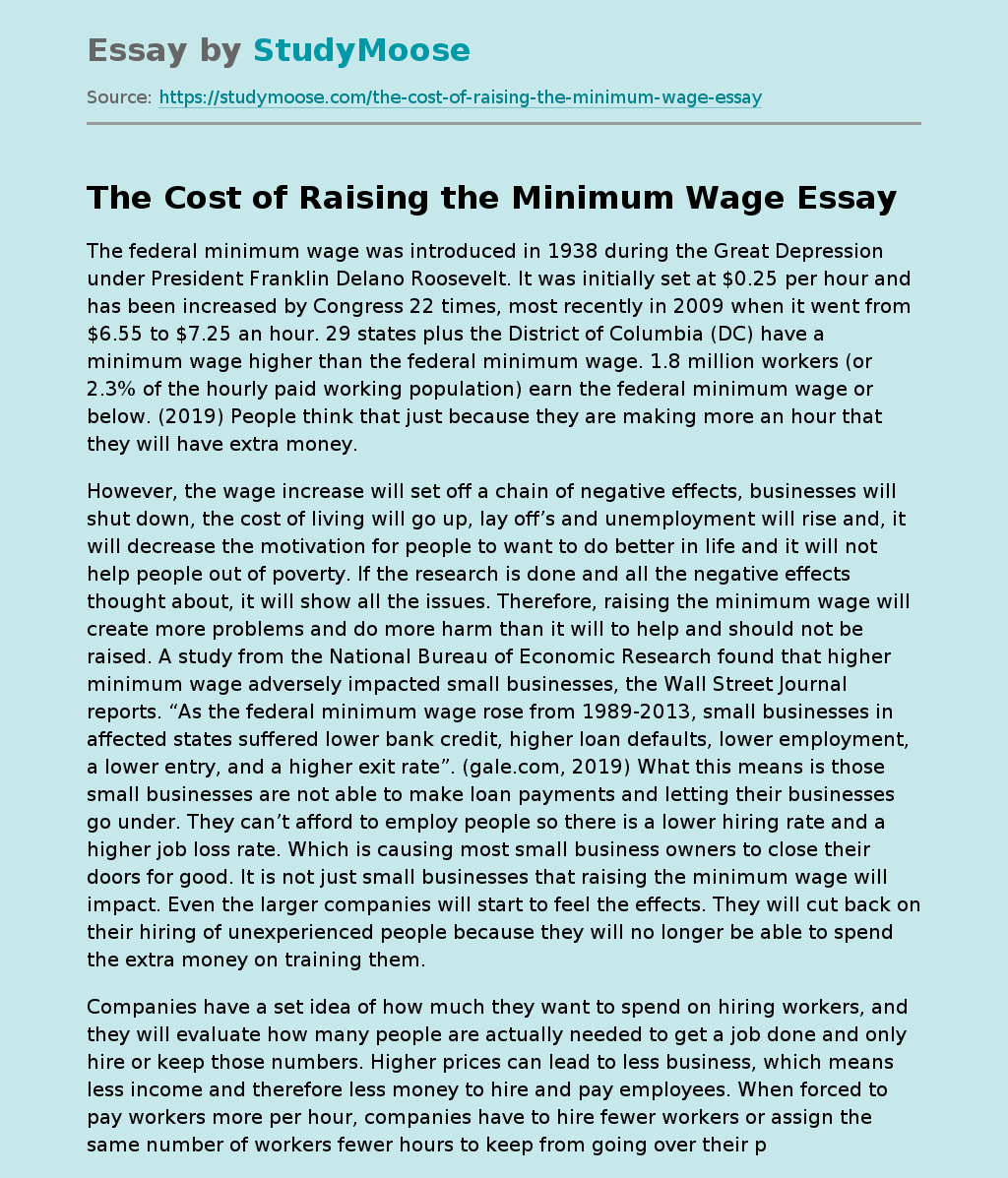