Tim Burton’s Corpse Bride is about a young man who accidentally marries a zombie bride. Victor Van Dort, and Victoria Everglot, are arranged to get marriage. After Victor ruins the wedding rehearsal, he ﬂees and practices in a forest near by, placing the wedding ring unintentional on a ﬁnger of a dead girl, who is now saying she is Victor’s wife. The Land of the Dead holds many bewilderments for Victor while he learns of Emily’s past story and get to know one another better.

Don't use plagiarized sources.
Get Your Custom Essay on The Corpse Bride Animated Movie Analysis Just from $13,9/Page

Back at home with Victor away, Victoria’s parents decide to move forward and marry her to a newcomer in town named Lord Barkis Bittern. Soon after Victor is informed of Victoria’s impending marriage to Lord Barkis. Victor agrees to die for Emily for their “marriage” to be valid, after realizing he has lost Victoria.

Victoria ﬁnds them both at a church and is followed by Lord Barkis.

As Victor prepares to drink the cup of poison to kill himself, Emily has second thoughts, realizing she doing the same to Victoria that was done on to her, taking away her happiness. Lord Barkis intrudes, and Emily recognizes him as her former ﬁancé and murder. Lord Barkis tries to kidnap Victoria against her will, but Victor steps in to stop him. As Lord Barkis decided to leave he makes a speech and accidentally drinks a cup of poison that was meant for Victor. The dead drag the “new arrival” away for punishment. Emily backs out of her agreement with Victor, and sets him free to be with Victoria. Giving the wedding ring back to him, she steps into the moonlight, she transforms into hundreds of butterﬂies, leaving all to assume she found peace.

I choose to do this paper on Tim Burton’s “Corpse Bride” because I have always loved the colors, music, story, and even the characters. After all Emily went through she is still optimistic even in her afterlife. Victory fought through the whole movie for true love and in the end was rewarded. The characters do have ﬂaws but they are still enjoyable and relatable as well. This movie has amazing colors and lighting. Throughout the movie all the darks and lights are placed in the right spots to create a consistent mood. The characters also have so many shades of color to them. The music is just an added bonus to everything. Some of the songs fun and lively, while others are a bit more serious. Tim Burton always does a good job with his movies, and this one was no exception.

While still enjoying all of the reason why I like this movie, I was watching out for all the transitions, cuts, color adjustments, and sound. Knowing that this ﬁlm was made by stop motion, made it a lot more interesting to experience. I know that there is only so much editing that can be contributed through a camera, while the rest must be from Final Cut. All the editing was done successfully, and if anything added more to the story and ﬁlm. Transitions were clean and nicely cut at appropriate spots. They were not a distraction nor did they interrupt the experience of the ﬁlm. The color was amazing, the darks were deep, the colors were pigmented. The editing on the contrast and saturation were perfect for the feel of the ﬁlm. The video and sound went very well together. I think that this was a huge factor in creating the ambience to this ﬁlm. The cute little features to this ﬁlm like how the sound goes with the ﬁlm was perfect.

A good example is when Emily was playing the piano but her hand broke off and it continued to make the sounds of the keys with every little beat of the hand. Working this Final Cut I know how many options their are to decide between. They choose the right ones at the right time. They worked out every little detail, which Im sure took a while. Only doing a minute project took a few days, I could only imagine working on something that is two hours long. To think that this movie was created with a software that anyone has access too, and is easy enough to learn, is amazing. They did an amazing job on “Corpse Bride” and only inspires me as a student to reach farther and achieve higher. They successfully created a ﬁlm with a decent story line, amazing visuals with the use of colors, sound that enchanted the video, clean transitions from clip to clip and all together an enjoyable experience. 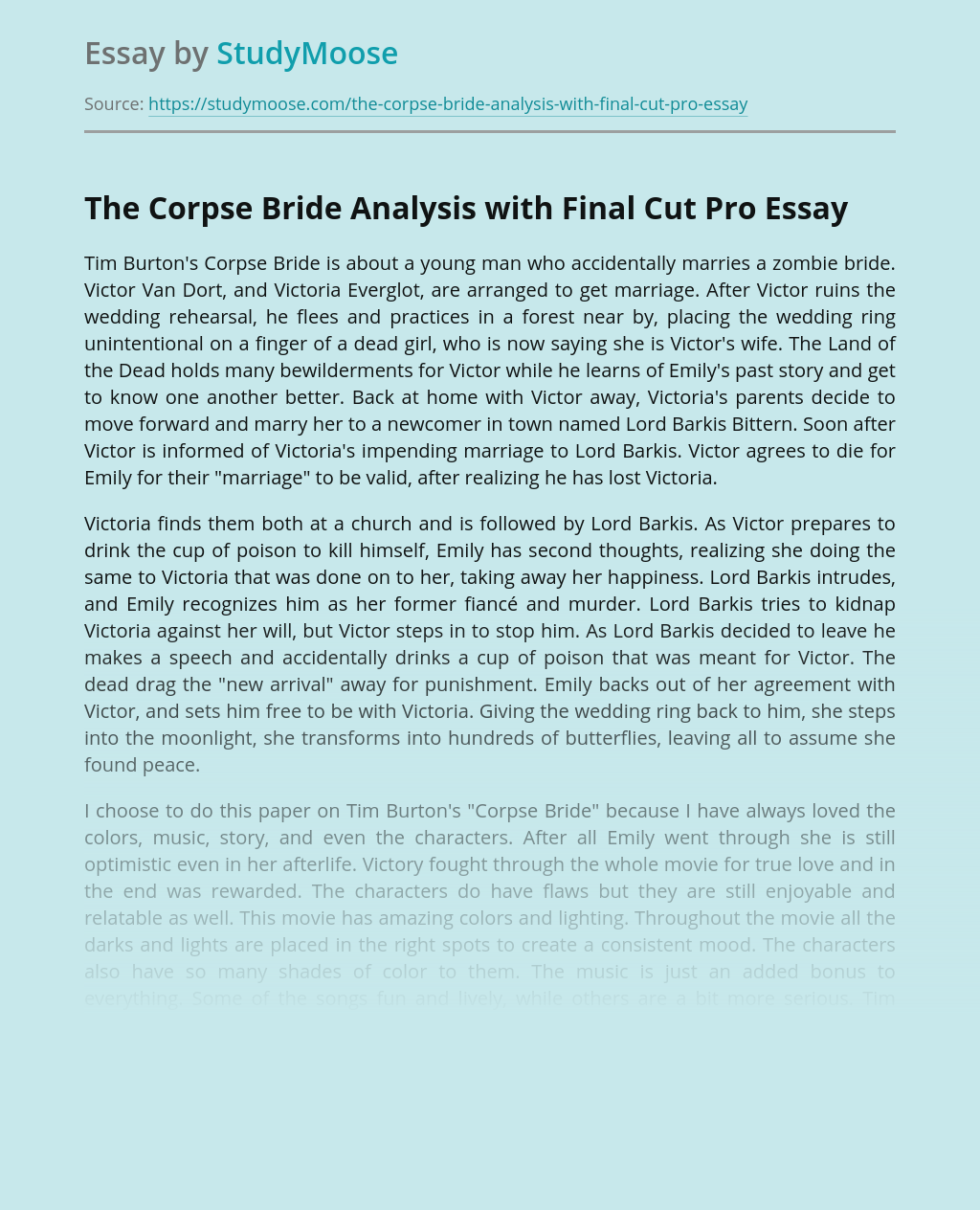 How Antagonists Effect a Story

Rate this post Belonging is a complex experience that explores relationship, place and identity. Belonging is clearly shown, in each of the above mentioned themes, in the film “Strictly Ballroom” by Baz Lurhman and the non-fiction extract “Home: The Heart Of The Matter” by Peter Read. Belonging is demonstrated through various techniques, which shows various...

Get Essay
Amelie by Jean-Pierre Jeunet

Rate this post The movie Amelie, directed by Jean-Pierre Jeunet, uses mise-en scene which in French means “having a good frame”. This is unmistakably obvious right through Amelie. In the introduction there is a breath taking shot of her skipping stones, her favorite thing to do. While standing on a bridge, the shot revolves around...

Rate this post Edward Scissor Hands (1990) by Tim Burton, is a romantic fantasy film centred upon a character, Edward (Johnny Depp), an uncommonly gentleman who is in fact an unfinished creation equipped with scissors for hands. Edward is taken in a by a suburban family (the Boggs) and quickly falls in love with the...

Rate this post ‘Chocolat’ a film directed by Lasse Hallstrom, centres around a small village by which on the surface area may appear serene and in ‘serenity’ however beyond the surface area lay lots of individuals and bigger groups of individuals, families, face concerns of seclusion, acceptance and tolerance within the neighborhood. These significant themes...

Rate this post The average trip to the theater will indulge the lesser senses, relaxing the mind while also discovering the storyline as the film progresses. When approaching a film with an analytical mindset it is important to have a deeper more developed thought process. Small details within a movie can prove to have extreme...

All About Eve Film Review

Rate this post Romeo and Juliet is a well known play which was written by William Shakespeare. This play has become into a modernized film which makes it easier for the younger generation to adapt to, allowing them to freely understand the concept of Shakespeare’s language. The most recent version of this play is directed...