?Michael Pollan’s article The Cooking Animal, describes the decline of home cooked meals and its effects. Cooking, he says, is what separates us from animals. It’s how we became civilized. By making us come together and share food, we learn about each other and ourselves. Although its importance, cooking is rapidly declining in modern times. What was once a daily ritual is now becoming a special occasion. Replacing cooking is convenient, yet horribly unhealthy, processed foods thus worsening the already increasing obesity problem.

Don't use plagiarized sources. Get your custom essay on
“ The Cooking animal ”
Get custom paper
NEW! smart matching with writer

”The more time a nation devotes to food preparation at home, the lower its rate of obesity” (Pollan 583). Pollan explains the importance of home cooked meals and it’s correlation with obesity and how we have fallen in the trap of the corporations. He explains how the mass producers made hard to make meals cheap, processed, and convenient leaving us to be forever doomed unless we made dire changes. Pollen raises many thoughts and facts about the importance of home cooked meals, all of which I completely agree with.

Cooking is what separates us from animals.

When our ancestors learned the ability to cook the new nutrients allowed them to evolve differently. Cooking not only provided us with much better nutrients but provided us with the means of creating our culture. When we gather with other people and eat together, we share ourselves (Pollan 582). When I first read this article the above statements just clicked with me, it all just made so much sense. I knew that cooking is important but crediting it for mankind’s evolution was new to me.

When I read this part of the article I couldn’t help but to imagine a group of Neanderthals eating around a fire, slowly creating their own culture.

Cooking is very important to many great cultures and can tell us much about said cultures. My family are big advocates of our Mexican culture so food is definitely very important to us. I’ve eaten with American, Indian, Lebanese, Vietnamese, and Egyptian families all of which had their distinct differences in how they ate and how they interacted with each other on the dinner table. Home cooked meals are being neglected by America causing obesity to become more prominent. The iconic image of the American family gathered around the dinner table is becoming a rare one.

Today’s American would much rather pick up a large order of fries than actually get the potatoes and make them yourself, and why not? The restaurants and super markets make it so cheap and easy that you would be a time wasting fool if you cooked it yourself at home. Pollen says that as the preparation time has gone down, calorie consumption has gone up. “As the amount of time Americans spend cooking has dropped by about half, the number of meals Americans eat in a day has climbed; since 1977, we’ve added approximately half a meal to our daily intake” (583).

That’s no surprise considering what goes into the fast food and mass produced foods. I remember I saw a video on what McDonalds chicken nuggets look like before they fry them and I never wanted to eat one ever again. If the chicken looks like pink silly putty, maybe we shouldn’t be eat it regularly. Thankfully I grew up on my mothers cooking. She has a full time job, three kids, and manages to make the best food everyday. I’ve always believed that all my physical and athletic achievements have been greatly attributed by my diet.

Apart from home cooked meals being generally far better nutritiously, they generally taste way better. Perhaps they taste better because they’re made with love? That’s up to the consumer to decide. Corporations that mass produce food have one motivation, profit. It’s their job to mass produce food the quickest and cheapest way to earn the most profit so obviously nutrition is going to be neglected. The marketing revolves around habits. If we form the habits of just relying on them for food we will not go back thus more profit for them.

It makes me think of an evil villain who’s bent on destroying the human race or at least making us all fat and lazy because that’s what’s happening. We’re becoming lazy which means our children will be lazy and the ability to cook will vanish and it will all go downhill from there. In Pollen’s article, he asked Harry Balzer what we can one do to fix this problem and he said “Easy. You want Americans to eat less? I have the diet for you. It’s short, and it’s simple. Here’s my diet plan: Cook it yourself. That’s it. Eat anything you want — just as long as you’re willing to cook it yourself” (584).

Cooking is something that has been around since the beginning and something that we cannot afford to loose. Cooking is what makes us human, what provides us with the right nutrients and what keeps us from falling into the industries trap. Michael Pollan’s The Cooking Animal reinforced my belief on the importance of home cooked meals and also expands it. Works Cited Pollan, Micheal. “The Cooking Animal. ” The Bedford Guide for College Writers withReader. By X. J. Kennedy, Dorothy M. Kennedy, and Marcia F. Muth. Boston, MA: Bedford/St. Martins, 2011. 581-85. Print. 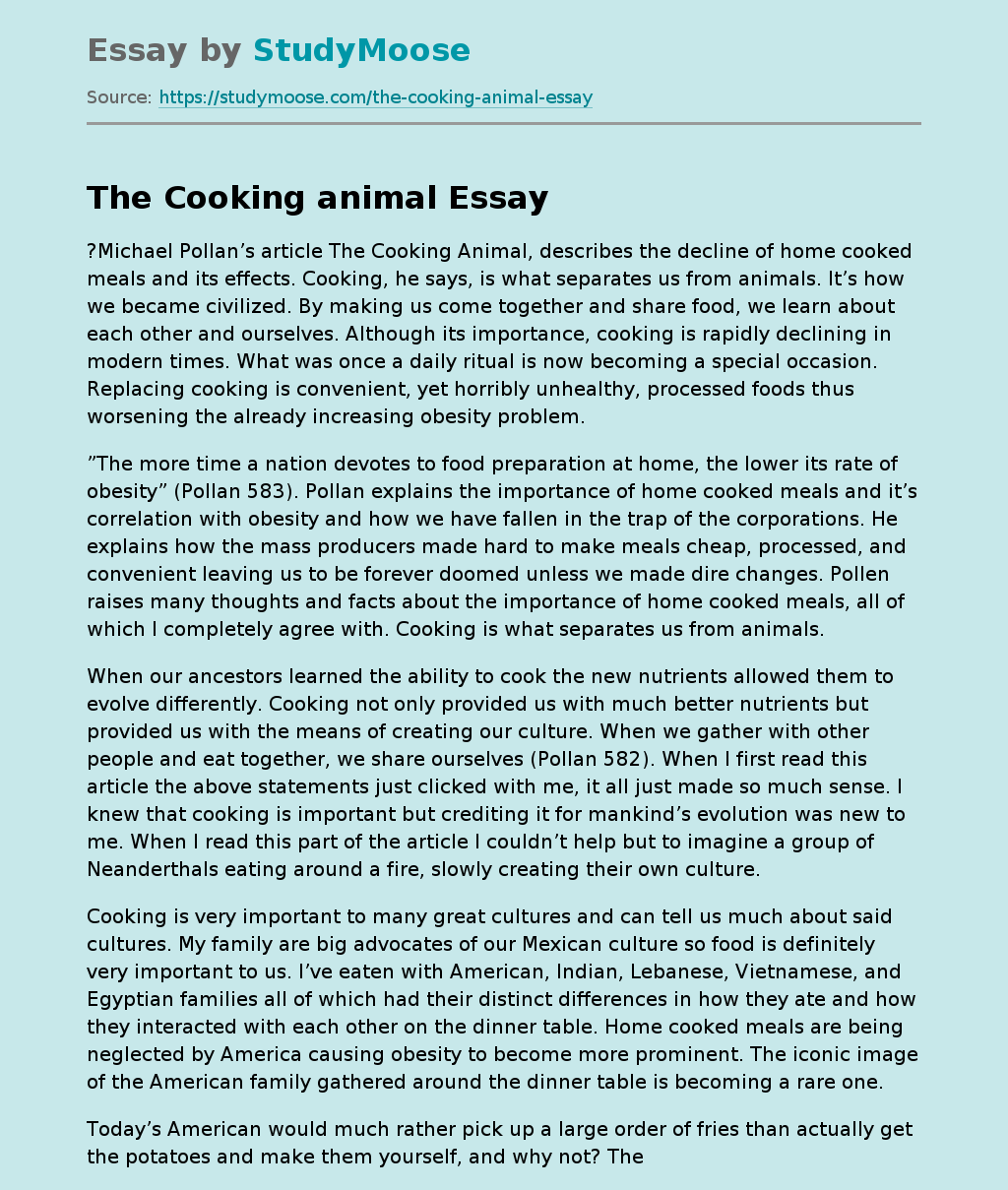