The Controversial Social Issue of Race in the American Society

Race in the American society has been one of the most controversial social issues that conceptually denote the primary classification of human beings, and it is the ideology upon which white superiority justified natives colonization in their land and the enslavement of Indian and African American. The context of race as used today in the American society emerged in a racist social construct of ‘race’ influenced by pseudo-science in the 18th and 19th centuries by scientific racists that defined race as being a genetic reference of superiority and inferiority(Medvei, 1982, p.

Don't use plagiarized sources. Get your custom essay on
“ The Controversial Social Issue of Race in the American Society ”
Get custom paper
NEW! smart matching with writer

152). In essence, the definition of race during this period employed a fixed and immutable diverse biological differences in skin color which classified groups of different races as being either of superior character or inferior in the absence of personality’s differentiation. This paper will critically discuss the idea of race in the 18th and 19th centuries in the American society and compare the similarity and difference indexes of these definitions about the arguments of Ferguson’s, Johnson’s and Perry’s about race as being inaccurate during the two centuries.

The three scholar, in their articles “Race,” “Slavery” and “white” respectively share diverse views on race and how it should be understood in a different background setting like America. Ideally in America, during the 18th and 19th century presented theories suggesting that racial differences among people of different origins misrepresented the element of as a representation of biological differences in beauty, intellectual capacity and natural character between different races. On the contrary, it was heterogeneously a compound that included physical, intellectual and cultural characteristics that were genetically imprinted on each race.

According to the narrative of Frederick Douglass (1845), attending an antislavery convention in Nantucket, having escaped from a prison house and eloquently discusses the subject of principle and viable measures in support of the abolishment of the slave trade disapproves the notion that African American’s are intellectually inferior (“Africans in America/Part 1/Alexander Falconbridge,” n.d.). He leads a discussion of the rational minds of fellow countrymen seeking retribution of slaves from their masters and committed to the course of emancipation and universal liberty of ‘Negroes.’ As a slave himself, he speaks of his gratitude to the gathering for supporting the idea that slavery was indeed a misguided school of thought for both the human intellect and heart (“Slavery | Keywords for American Cultural Studies,” n.d.). The argument in the narrative supports the views of the Walter Johnson who demonizes slavery in the essay, “Slavery’. Like in the narrative, Johnson arguments that slavery was the story legitimizing violence, kidnapping and forced labor that emerged in the 15th century and seemed to persist up to the early 1900s. He attributes that the only people who can tell the story of slavery are the slaves themselves, an argument Frederick emphasizes in his narrative of Slavery.

Pamela Perry (2002) challenges the idea that physical appearance reflects the fundamental attributes of a person. The typical use of white and black to represent “light” and “black” propagated by naturalists and European historians to interpret white to mean perfection and purity. The privileges of the ‘white’ category that catalyzed the construction of these theories on race were inaccurate. Precisely, the superiority complex of the race was a social construct to maintain dominance and oppression (“White Keywords for American Cultural Studies,” n.d.). The African American construction of race for economic gain and did not represent their superior moral qualities. Pamela Perry quotes Richard Dyer”, “white power secures its dominance by seeming not to be anything in particular” (“White Keywords for American Cultural Studies,” n.d.). In the testimony by Alexander Falconbridge in his one voyages to buy slaves supplements the argument of Pamela that indeed physical appearance does not correlate to one’s moral qualities. Alexander Falconbridge recounts inhuman treatment of the slaves in the trade (“Africans in America/Part 1/Alexander Falconbridge,” n.d.). If indeed the White were pure as they claimed, then the account of how the trade was conducted proves the idea of white purity is not an accurate inference of race. The subject the Africans to horror from the point of acquisition at the Liverpool harbor (“Frederick Douglass, 1818-1895. Narrative of the Life of Frederick Douglass, an American Slave. Written by Himself,” n.d.). In the case of sea disasters, human beings are disposed of like animals. Concomitantly, the accounts Alexender reinforces the argument of “White” that indeed, physical appearance does not reflect inner nature and race is just physical, our inner being is similar.

The poetry of Phillis Wheatley, “On Being Brought from Africa to America” argumentatively disqualify the ideas of the Africans as being a doomed race who cannot learn the civilized ways of the white people because they are inferior in her inference, “Their color is a diabolic die.”. She concludes race is not a basis for affirmatively passing judgment on the black race as doomed and cannot become Christians. Phillis says,

“Some view our sable race with scornful eye,

“Their color is a diabolic die.

May be refined, and join the’ angelic train.”

She is of African descent and writes poetry with impressive eloquence and fights for her liberation of her people through poetry. Phillis subjectively gives meaning to Ferguson’s essay of ‘Race’ in regards that studying race incorporates an in-depth analysis of freedom and the ability of each to acquire and utilize knowledge. The political and economic constructs of race lack to apply epistemology of the races. In a way, to understand race accurately, it requires a subjective racial differentiation that excludes violence inscribed in the historical context of the preconceived notions of the African American race.

As this paper shows, the understanding of Race in America in the 18th and 19th century was the foundation for definition of the race today and was biased. In a way, the way race was defined fueled social injustices to the non-white races. Moreover, it created a state of inequality and gave the racist white an avenue to exploit people of different origins for their economic gain. The social constructs hold no proof but in essence were racist ideologies to give the excessive white power over other races.

The Controversial Social Issue of Race in the American Society. (2021, Sep 21). Retrieved from https://studymoose.com/the-controversial-social-issue-of-race-in-the-american-society-essay 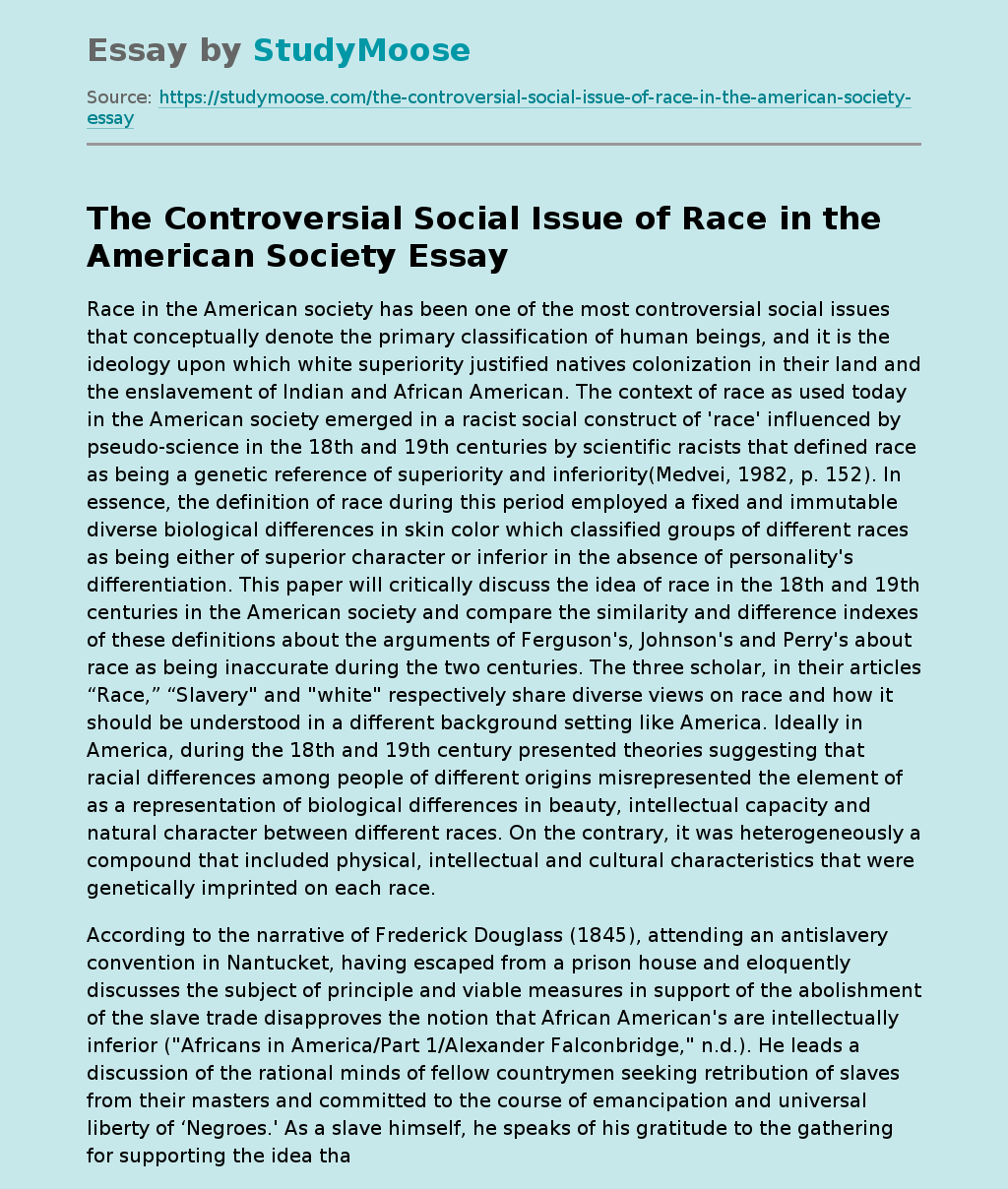