The Contributions of Greeks and Arabs to Mathematics

The Greeks are one of the historical groups that contributed mostly to civilization. They have contributions in science, philosophy, and many other important fields like mathematics. It was when Greece started to consider mathematics as a science when the people of ancient Egypt and Babylon went to Greece for trade. However, although the Greeks have much contributions in mathematics, their discoveries regarding math were not recorded immediately rather spread through word of mouth. That is why Thales and Pythagoras did not have written texts about their work.

Don't use plagiarized sources. Get your custom essay on
“ The Contributions of Greeks and Arabs to Mathematics ”
Get custom paper
NEW! smart matching with writer

Other Greeks namely Proclus and Eudemus just did a summary of the work of Pythagoras and Thales (“Greece: Mathematics,” 2001).

Early Greek Mathematics Thales is the one responsible for the theorem that says “any angle inscribed in a semicircle is a right angle”. This is very important and is very useful in the field of Geometry. Aside from his theorem about the right angles in a semicircle, he was also said to have measured the height of the pyramids just by measuring their shadows using a stick.

Another thing that made Thales famous is the fact that, although the Egyptians and Babylonians brought the idea of mathematics to Greece, he was able to organize these ideas rationally (“Greece: Mathematics,” 2001). Thales is also the one responsible for practicing geometry in everyday life since it is normally used at that time just for the sole reason of measurement. Because of this, other Greeks have been encouraged to follow what Thales had started. They are Pythagoras and Plato (“Greece: Mathematics,” 2001). Pythagoras is not just a mathematician but also a man of astronomy and religion and that’s what made him famous that time.

In fact, he founded a school in which the members are called Pythagoreans that would soon study about discoveries and new ideas in mathematics, astronomy and philosophy (“Greece: Mathematics,” 2001). Talking about the contributions of Pythagoras to math, he was the one who introduced that the sum of angles of a triangle was half the central angle of a circle. Also, he proved that the plane space around a point could be divided into six equilateral triangles, four squares or three regular hexagons (“Greece: Mathematics,” 2001). But we all know that these are not the most famous works of Pythagoras.

Every student today in secondary school knows the Pythagorean Theorem which states that the sum of the squares of the shorter sides of a right triangle is equal to the square of the third side. There is no doubt that this is one of the most useful theorems in mathematics today. The Pythagorean had been used in proving several other theorems in geometry and trigonometry. However, although this is one of the most famous works of Pythagoras, there were some reports that tracked down the Pythagorean Theorem to the Babylonians and that Pythagoras is the only one who provided proof to the theorem.

Although this is the only visible work of Pythagoras today, his followers, the Pythagoreans are the ones who introduced the use of mathematics in religion, nature, etc (“Greece: Mathematics,” 2001). These Pythagoreans are responsible for the development of modern geometry. Hippocrates is one of them who studied about the quadrilateral. Another one is Hippias, the one who discovered the quadratrix which was the first curve that could be defined but could not be constructed with a straightedge and compass. The dodecahedron which was discovered by a Pythagorean named Hippasus is a regular polyhedron that consists of twelve faces.

Another contribution of Greeks in geometry is the fact that there is a relationship between the volume of a cone and a cylinder with equal base and height. This was discovered by Democritus who also computed for the volume of the Egyptian pyramids. It is also the discovery of the Greeks that concerns integral calculus which s attributed as the method of reduction. This method involves increasing the number of sides of a rectilinear figure to approximate it to the area of a curvilinear figure (“Greece: Mathematics,” 2001). Although Plato is a very famous Greek philosopher, he also has his fair share in ancient Greek mathematics.

However, it started with his mentors first. Theodorus, his teacher in Athens, proved that the square roots of non-square integers from 3 to 17 are irrational. Eudoxus is the one responsible for the fame of ratio and proportion in mathematics because of his book. Menaechmus, on the other hand, is credited for the properties of conics. Aristotle (which was said to be Plato’s brightest student), has a book on indivisible lines and mechanics. Euclid, one of the greatest mathematicians of all time wrote a book consisting of all known mathematical knowledge which became famous for its being simple and logical.

Last but not the least is Archimedes who contributed many important mathematical concepts. He was the one who discovered the concept of buoyancy and was also the one who was known for setting ships on fore using only a mirror and the sun’s rays. Aside from these discoveries, his works also consist of summation of squares of consecutive numbers, cubic equations, and solving for the area of a parabolic segment. He also proved that the volume of a sphere is one-third the volume of a cylinder with the same radius and height, and that the surface area of a sphere is four times the area of its greatest circle (“Greece: Mathematics,” 2001).

Contribution of Arabs to mathematics If the Greeks are the ones responsible for geometry and trigonometry, they are very famous for the numerals and numbers. The Arabs are responsible for writing numerals from right to left. The Arabs also introduced the number zero. It was introduced by Muhammad Bin Ahmad. When zero was discovered, many disregarded it as important in the field of mathematics yet zero enabled many mathematics scholars to derive several laws and theorems that we are using right now.

If the Greeks focused mostly on geometry such as plane figures and curvilinear figures, the Arabs managed to solve Algebraic problems using arithmetic methods. The also have their fair share when it comes to the concept of fractions (“Arab contributions to mathematics and the introduction of the Zero,” 1998). An Arab known as al-Khawarzmi is responsible for solving linear and quadratic equations in algebra. Aside from that, he also provided the geometrical methods of solving these equations. He was also the one who discovered that second degree equations have two roots.

Because of his great contributions to algebra, it reported that the word algebra was named after him because he is considered as the father of Algebra in Arab mathematics. He is also the one who discovered geometric methods for completing the square (Drakos, 1996). With his methods, no symbols were used and no zero and negative coefficients were allowed. He is also the one who discovered the name algorithm (“Arab contributions to mathematics and the introduction of the Zero,” 1998). Because of these people, the Arabs learned to perfect geometrical algebra and they were also able to solve equations up to the fourth degree.

Another Arab is Abul Wafa which made contributions about the polyhedral theory. Aside from that, he is also famous for his use of the tangent function and the discovery of the tables of sines and tangents. What was really amazing about him is his discovery of these things using the orbit of the moon! His trigonometric tables were accurate up to eight decimal places while Ptolemy’s were only accurate up to three places (Drakos, 1996). Another great Arab mathematician is Al-Karaki who wrote books regarding arithmetic and algebra. The Arabs also continued the Greeks’ studies about conics and developed the geometry of conic sections.

Al Tusi discovered that trigonometry should be separated from trigonometry which opposes Euclid’s theory of parallels. Because of his discovery, he could be considered as the founder of non-Euclidian geometry (“Arab contributions to mathematics and the introduction of the Zero,” 1998). Abu l’Hasan al-Uqlidisi has his contributions in algorithm in multiplication and decimal fractions. Al Hasib is famous for his works in integer solutions. He also solved for the solutions of fourth degree equations and was able to solve for quadratic equations with irrational coefficients.

Al Hasib is sometimes known as Abu Kamil. What made Abu Kamil famous is his knowledge about irrational coefficients which were not used by the famous Al Khwarizmi. Abu Bakr al-Karaji is also one of the Arab mathematicians which discovered the numerical solutions to the equations of the form . Omar Khayyam, another mathematician as well as poet is concerned about cubic equations and studied on parabolas and circles. Al Kashi is also an Aras which contributed to a very important concept of . He calculated its value up to 16 decimal places (Drakos, 1996).

The Contributions of Greeks and Arabs to Mathematics. (2016, Sep 22). Retrieved from https://studymoose.com/the-contributions-of-greeks-and-arabs-to-mathematics-essay 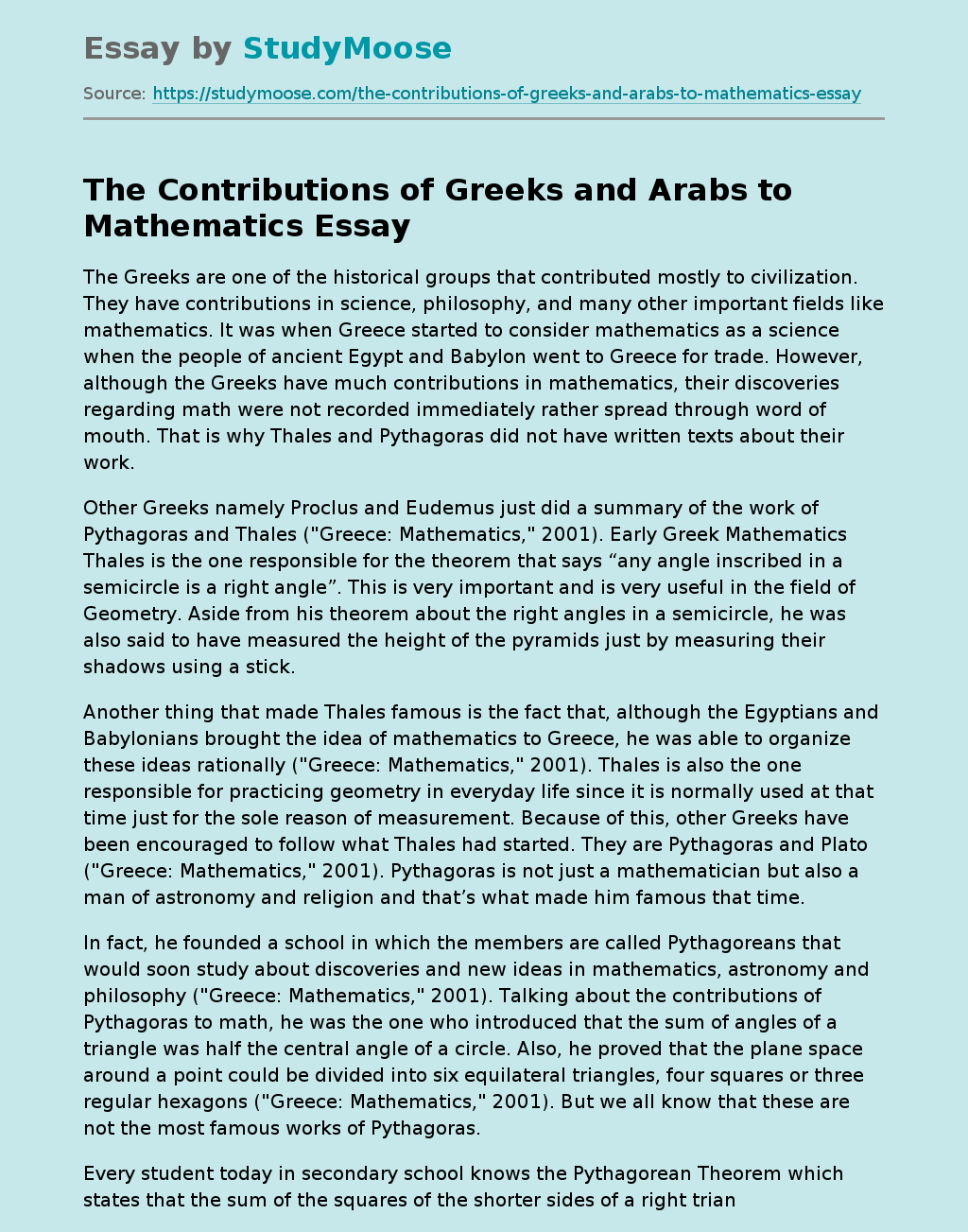