The Contents of Perception

Hume’s ultimate goal in his philosophic endeavors was to undermine abstruse Philosophy. By focusing on the aspect of reason, Hume shows there are limitations to philosophy. Since he did not know the limits, he proposed to use reason to the best of his ability, but when he came to a boundary, that was the limit. He conjectured that we must study reason to find out what is beyond the capability of reason. Hume began his first examination if the mind by classifying its contents as Perceptions.

Don't use plagiarized sources. Get your custom essay on
“ The Contents of Perception ”
Get custom paper
NEW! smart matching with writer

“Here therefore [he divided] all the perceptions of the mind into two classes or species.” (27)

First, Impressions represented an image of something that portrayed an immediate relationship. Secondly, there were thoughts and ideas, which constituted the less vivid impressions. For example, the recalling of a memory. From this distinction, Hume decreed that all ideas had origin within impressions. From the distinction of perceptions, Hume created his ? microscope’ in order to trace all ideas back to impressions.

He did this to search for the limits. If an idea could not be traced back to its impression, it was too abstruse. Hume separated the objects of human reason into two categories.

First, the relation of ideas, which represented all that is ? a priori’. Secondly, he created the category of matters of fact. Matters of fact made up the ? a posteriori’ piece of the spectrum of reason. Matters of fact are contingent, meaning they could be otherwise. In order to go beyond the objects of human reason, Hume proposed that reasoning was based upon cause and effect.

Causal relations help us to know things beyond our page 2 immediate vicinity. All of our knowledge is based on experience. Therefore, we need experience to come to causal relationships of the world and experience constant conjunction.

Hume stated that he “shall venture to affirm, as a general proposition which admits no exception, that the knowledge of this relation is not in any instance, attained by reasonings ? a priori’, but arises entirely from experience. ” (42) Unfortunately, our experience of constant conjunction only tells us about the past. Rationally, that is all it tells us. We can expect the effect to follow the cause, but it is not a sufficient basis to assume the effect will come from the cause in the future. These things are contingent- they could be different.

“The connection between these two propositions is not intuitive?it is always inferred. ” (480) Hume asserted that the future will resemble the past. This is the assumption underlying all our ideas of causality. If the future does not resemble the past, then all our reason based on cause and effect will crumble. When Hume proposed questions such as “Is there any more intelligible proposition then to affirm that all trees will flourish in December and January, and will decay in May and June? ” (49), Hume demonstrates that it is not a relation of ideas that future will resemble the past; it is possible that the course of nature will change.

Therefore, what happens in the future is neither a relation of ideas, nor a matter of fact. “It is impossible, therefore, that any arguments from experience can prove this resemblance of past to future, since all these arguments are founded on the supposition of that resemblance. “(51) Now Hume proposed that all inferences come from custom, not reasoning. Through custom or habits, we have become accustomed to expect an effect to follow a page 3 cause. This is not a rational argument. This argument centers on the theory of constant conjunction, which does not fall under either fork of reason.”

All inferences from experience, therefore, are effects of custom, not reasoning. “(57) Hume analyzed the idea of causality by emphasizing the three demands that can be verified through observation. First he argued the aspect of constant conjunction. In this aspect, the cause and effect must be spatially and constantly existent. Secondly, he asserted that it must have temporal priority, in that, the cause had to precede the effect. Lastly, the event must have a necessary connection- we must develop an understanding of why a cause produces a certain effect. Hume’s critique of causation is that we cannot see it, we must infer it.

For example, two billiard balls, one moving toward the next demonstrate temporal priority because one ball is moving first. Secondly, constant conjunction occurs because the balls exist together spatially and constantly. But, there is no necessary reason why this happens. Hume asserted that we can imagine a world in which the effect would be different. He then concluded that we can’t get an impression of a necessary connection, we can only experience constant conjunction and temporal priority. “Experience only teaches us how one event constantly follows another, without instructing us in the secret connection which binds them together.” (77) We therefore conclude that reason is a limited faculty and that “we have no reason to trust our common methods of argument or to think that our usual analogies and probabilities have any authority. “(83) In conclusion, Hume asserted that since we do not have any impression of necessary connections, it is our expectation that believes the effect will follow the cause. page 4 ” The appearance of a cause always conveys the mind, by a customary transition, to the idea of the effect. ” (87) Since we are trained to expect the impression of necessary connection, the idea of it comes from our minds.

Therefore, our belief in necessary connections of the universe is based on a rational facts. Immanuel Kant, a philosopher after Hume, sets out to reform metaphysics. Kant believed that if Hume was right, metaphysics would be impossible. But, Kant was unwilling to surrender to Hume’s skeptical argument, so Kant sets out to do a critique in order to explore the possibilities and reform metaphysics. Kant begins his critique searching for ? a priori’ knowledge within philosophy. Kant began to search for the ? a priori’ principles that were rationally deductible in order to explain why we perceive the things we cannot perceive.

Kant believed that the only way that we could get to things necessary and universal was through ? a priori’. Kant found that “the concept of the connection of cause and effect was by no means the only concept by which the understanding thinks the connection of things ? a priori’, but rather that metaphysics consists altogether of such concepts. “(8) Kant began to examine pure ? a priori’ reason by establishing his critique. He stated that there are boundaries and contents. He set out to find what is inside the limitations and what is outside. Kant examined the three bodies of knowledge: math, physical science and metaphysics.

Kant said that science must have necessity and universality. This places math and science within reason. Kant first divided judgement into two kinds of knowledge- analytic and synthetic. In the Prolegomena, Kant criticized Hume for having regarded mathematical judgements as analytic. Had he realized that page 5 they were synthetic, Hume would have been able to conclude that some synthetic judgements can be made ? a prior’. Kant concluded that math and science fell under ? a priori’ synthetic judgements. This gives us universality, but it also tells us something.

For Kant, knowledge must be necessary and universal qualities must come from ? a priori’ synthetic judgements. They have to tell us something we don’t know, something completely independent of experience. This idea of Kant’s, completely contradicts Hume. Hume had asserted that anything based on empirical facts had no necessity, and therefore was contingent. Hume also stated that empirical facts couldn’t give us universality either, because we can’t know future will resemble the past. Kant stated that all Hume’s beliefs centered upon the fact that “nothing but experience could furnish us with such connections.” (24) For Hume, all science was empirical, and we could only know what happened so far. In contrast, for Kant, he said that scientific laws claim necessity and universality. It is only from ? a priori’ that we get universality and necessity. Kant then continued his critique to decipher if metaphysics is possible. Kant separated the faculties of the mind and the way it thinks into three distinctive categories. First, he stated that math was exhibited through intuition. The forms of intuition were ? a priori’ and had two capacities. First, intuition gave us space and time through pure intuition, and sensory data through empirical intuition.

Then, Kant set up a metaphysical distinction between numena and phenomena. Numena represents the things in themselves, while phenomena represents the things for us. In this dichotomy we have no page 6 access to numena. The only way we can get to things outside us is through intuition, but intuition has these forms. This shows our limitations. Mathematics is not applicable to numena. We can have mathematical knowledge of phenomena. From this we can infer we have inter-subjective knowledge. Kant has given us universal and necessary knowledge in the phenomenal realm.

Kant points out that the “error may arise owing to an illusion, in which [he proclaim] to be universally valid what is merely a subjective condition of the intuition of thing and certain only of all objects of senses, namely for all possible experience. ” (39) Kant has just suggested that the error and base for all metaphysics is not distinguishing between phenomena and numena. Finally, Kant explained that everything is a distinction of phenomena and numena. We receive necessity and universality through this distinction and also from the projection that phenomena comes from certain ? a priori’ aspects.

Therefore, the future will resemble the past, because we make it resemble the past. Kant used understanding, the second faculty of the mind to explain causality. “As the understanding stands in need of categories for experience, reason contains in itself the source of ideas. “(76) The function of understanding is thinking, and thinking must use concepts to be an objective thought. The presence of this objective thought verifies its actuality. Therefore, causality, for Kant, was the way in which mind puts together experiences to understand them. Kant found many problems within Hume’s account.

Through his endeavors to prove that metaphysics is possible, and his analyzing of causality, Kant solved the problems he saw within Hume’s account. Specifically, in the Prolegomena, Kant stated page 7 that Hume “justly maintains that we cannot comprehend by reason the possibility of causality. “(57) Kant also attacked Hume’s ideas by describing Hume’s treatment of the concept of causality to be “a bastard of the imagination, impregnated by experience. “(5) Kant succeeded in re- establishing the objectivity of causality, a task that Hume had rejected as impossible.

The Contents of Perception. (2016, Nov 15). Retrieved from https://studymoose.com/the-contents-of-perception-essay 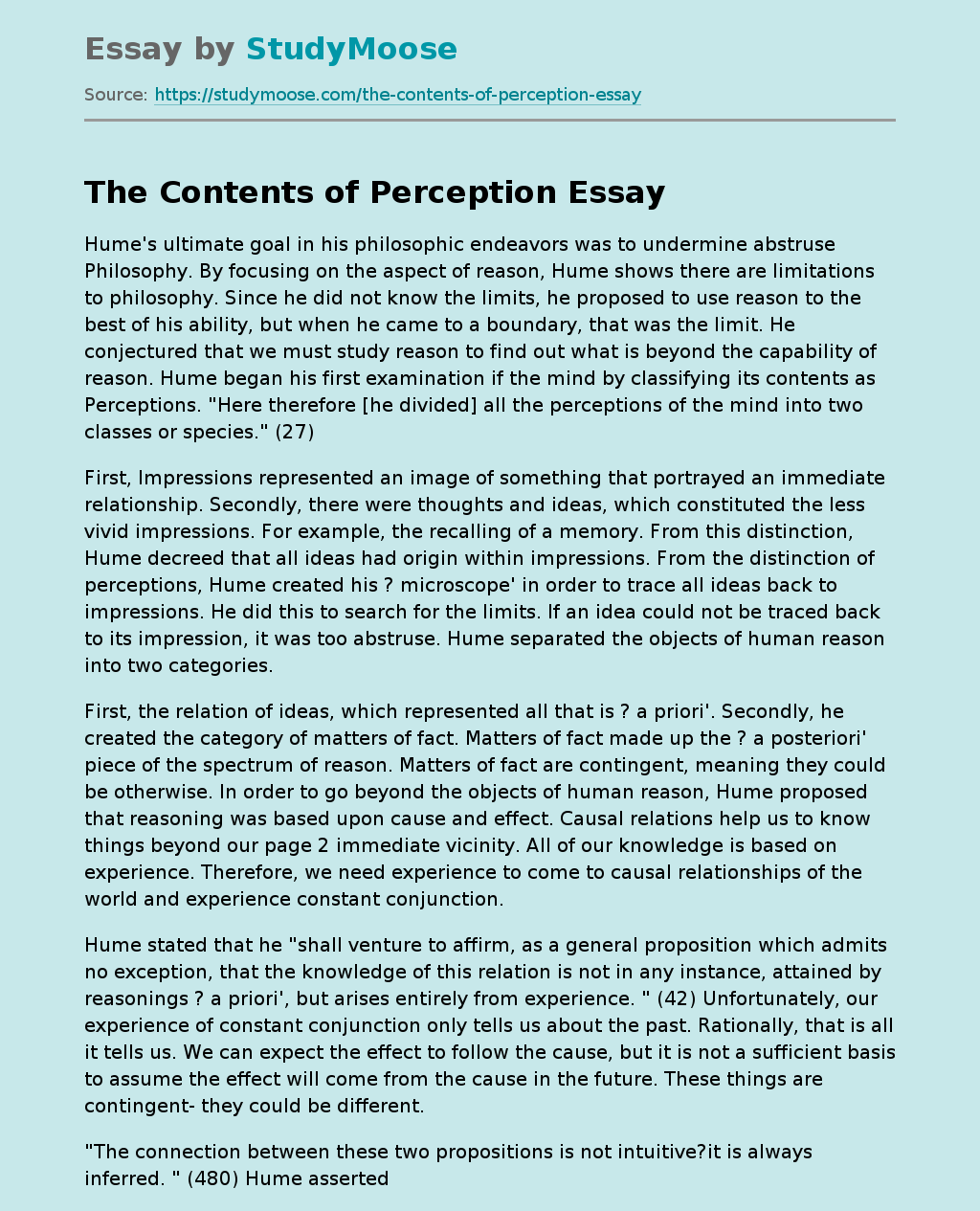