It all started so positively. Three days after graduating with his degree in business administration, Mike Wilson started his first day at a prestigious insurance company – Consolidated Life. He worked in the Policy Issue Department. The work of the department was mostly clerical and did nit require a high degree of technical knowledge. Given the repetitive and mundane nature of the work, the successful worker had to consistent and willing to grind out paperwork.

Rick Belkner was the division’s vice-president, “the man in charge” at the time, n actuary by training and a technical professional described in the division as the “the mirror of whomever was the strongest personality around him”.

It was also common knowledge that Belkner made $60,000 a year while he spent his time doing crossword puzzles.

Mike was hired as a management trainee and promised a supervisory assignment within a year. However, because of a management reorganization, it was only six weeks before he was placed in charge of an eight-person unit, The reorganization was intended to streamline workflow, upgrade and combine the clerical jobs, and make a greater use of the computer system.

It was a drastic departure from the old way of doing things and created a great deal of animosity and anxiety among the clerical staff.

Management realized that a flexible supervisory style was necessary to pull off the reorganization without immense turnover, so the firm gave its supervisors a free hand to run their units as they saw fit. Mike used this latitude to implement group meetings and training classes in his unit.

In addition, he assured all members raises if they worked hard to arraign them.

By working long hours, participating in the mundane tasks with his unit, and being flexible in his management style, he was able to increase productivity, reduce errors, and reduce lost time. Things improved so dramatically that he was noticed by upper management and earned a reputation as a “superstar” despite being viewed as free-spirited and unorthodox. The feeling was that his loose, people-oriented management style could be tolerated because his results were excellent.

After a year, Mike received an offer from a different consolidated Life division located across town. Mike was asked to manage an office in the marketing area. The pay was excellent and it offered an opportunity to turn around an office in disarray. The reorganization in his present division at consolidated was almost complete, and most of his mentors and friends in management had moved on to other jobs. Mike decided to accept the offer. In his exit interview, he was assured that if he ever wanted to return, a position would be made for him. It was clear that he was held in high regard by management and staff alike. A huge party was thrown to send him off.

The new job was satisfying for a short time, but it became apparent to Mike that it did not have the long-term potential he was promised. After bringing on a new staff, computerizing the office, and auditing the books began looking for a position that would both challenge him and give him the autonomy he needed to successful.

Eventually, word got back to Rick Belkner that Mike was looking for another job. Rick offered Mike a position with the same pay he was now receiving and control over a 14-person unit in his old division. After considering other options, Mike decided to return his old division, feeling that he would be able to progress steadily over the next several years.

Upon his return to Consolidated Life, Mike became aware of several changes that had taken place in the six months since his departure. The most important change was the hiring of a new divisional senior vice-president, Jack Greely. Greely had been given total authority to run the division. Rick Belkner now reported to Jack.

Belkner’s reputation was now that he was thought but fair. It was necessary for people in Jack’s division to do things his way and get the work out”. Mike also found himself reporting to one of his former peers, Kathy Miller, who had been promoted to manager during the reorganization. Mike had always “hit it off” with Miller and foresaw no problems in working with her.

After a week, Mike realized the extent of the changes that had occurred. Gone was the loose, casual atmosphere that had marked his first tour in the division. Now, a stricter, task0oriented management doctrine was practiced. Morale of the supervisory staff had decreased to an alarming level. Jack Greely was the major topic of conversation in and around the division.

People joked that MBO now meant “management by oppression”. Mike was greeted back with comments like “Welcome to prison” and “why would you come back here? You must be desperate!”It seemed as is everyone was looking for new jobs or transfers. Their lack of desire was reflected in the poor quality of work being done.

Mike felt that a change in the management style of his boss was necessary in order to improve a frustrating situation. Realizing that it would be difficult to affect Greely’s style directly, Mike requested permission from Belkner to form a Supervisor’s Forum for all managers on Mike’s level in division. Mike explained that the purpose would be to enhance the existing management-training program.

The meeting took place, and ten supervisors who were Mike’s peers in the company eagerly took the opportunity to “Blue Sky” it. There was a euphoric attitude about the group as they drafted their statement of intent. It read as follows:

On Thursday, June 11, the Supervisors’ Forum held its first meeting. The objective of the meeting was to identify common areas of concern among us
and to determine topics that we might be interested in pursuing.

The first area addressed was the void that we perceive exists in the management-training program. As a result of conditions beyond anyone’s control many of us over the past year have held supervisory duties without the benefit of formal training or proper experience.

Therefore, what we propose is that we utilize the Supervisors’ Forum as a vehicle with which to enhance the existing management-training program. The areas that we hope to affect with this supplemental training are: a.) morale/job satisfaction, b) quality of work and service, c.) productivity, and d.) management expertise as it related to the life insurance industry. With these objectives in mind, we have outlined below a list of possible activities that we would like to pursue.

1. Further utilization of the existing “in-house” training programs provided for manager trainees and supervisors, i.e., Introduction to Supervision, E.E.O., and Coaching and Counseling. 2. A series of speakers from a various sections in the company.

This would help expose us to the technical aspects of their departments and their managerial style. 3. Invitations to outside speakers to address the Forum on management topics such as managerial development, organizational structure and behavior, business policy, and the insurance industry. Suggested speakers could be area college professors, consultants, and state insurance officials. 4. Outside training and visits to the field.

This could include attendance at seminars concerning management theory and development relative to the insurance industry. Attached is a representative sample of a program we would like to have considered in the future.

In conclusion, we hope that this memo clearly illustrates what we are attempting to accopmplish with this program. It is our hope that the

The consolidated life case. (2016, May 09). Retrieved from http://studymoose.com/the-consolidated-life-case-essay 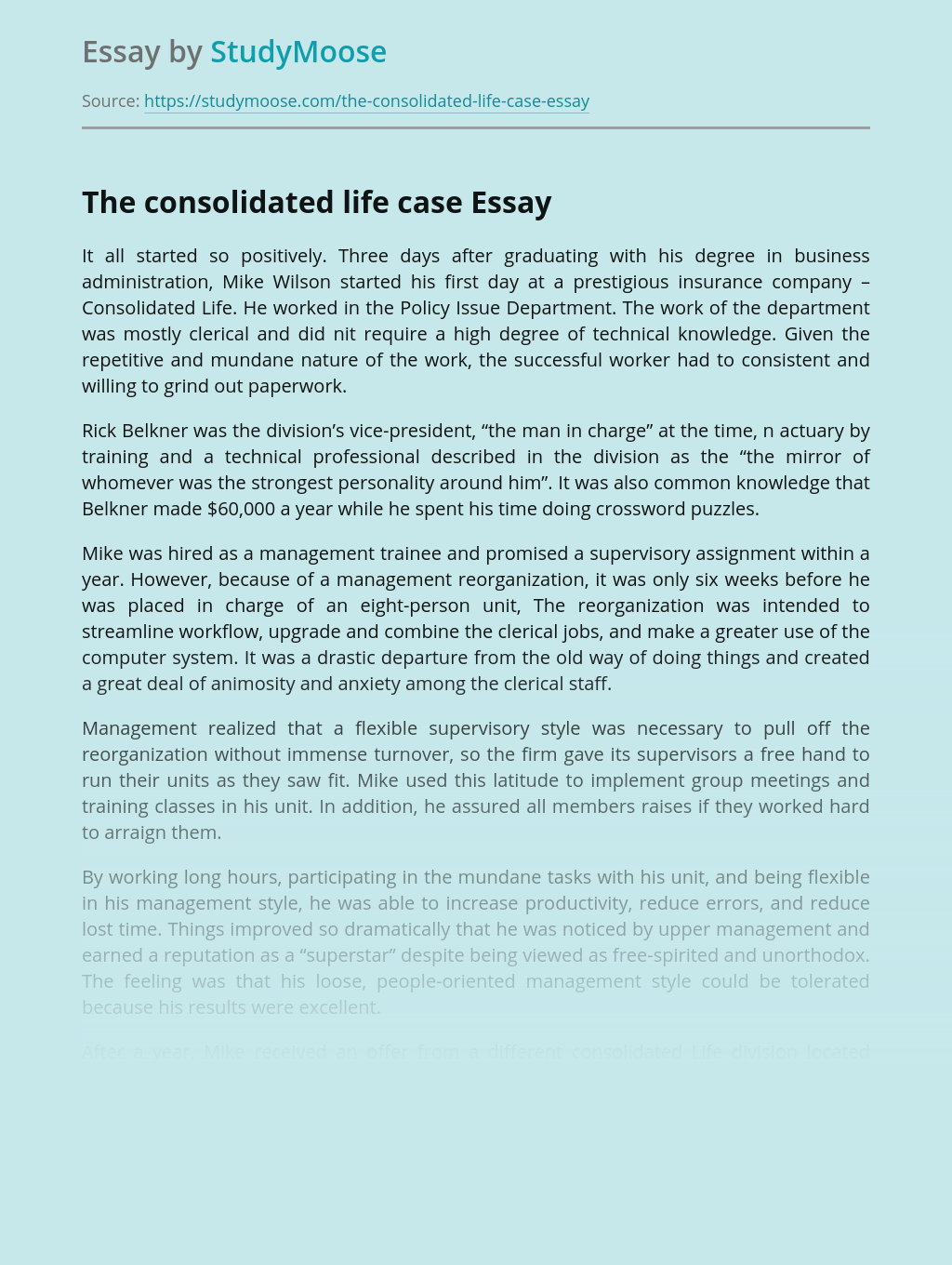 Don’t waste time
Get a verified writer to help you with The consolidated life case
Hire verified writer
$35.80 for a 2-page paper
Stay Safe, Stay Original