The Conflict Between Ulysses and Neptune in Homer’s “Odyssey”

The work Odyssey has always been extremely interesting to me. I have seen many movies based on the story and have been fascinated with the conflicts between humans and gods. In my essay I discuss the conflict between Ulysses and Neptune, by pointing out the latter is Ulysses main antagonist. I love the fact that Ulysses is a very heroic character and there is plenty of evidence about this in the work. Neptune is like the bad guy in the story and Homer had created a dark vibe around him.

Don’t waste time
Get a verified writer to help you with The Conflict Between Ulysses and Neptune in Homer’s “Odyssey”
Hire verified writer
$35.80 for a 2-page paper

While writing this paper I discovered that I can think creatively and enjoyed it a lot. When I started just jotting down my thoughts I couldn’t stop. It was getting more and more interesting to find more evidence that support main thesis.

While reading over and over some certain parts of Odyssey I found out that all characters are saturated with a lot of qualities that have a deeper meaning.

Even though at first Neptune seemed right for the revenge for his son, gradually I discovered that he could not be compared as a father to Ulysses. When comparing gods with humans it is necessary to think that gods are often two faced and very selfish. The easy part for me when writing this essay was to write the thesis and figure out the main points I am going to be talking about.

My thoughts were thriving in this topic and I enjoyed it a lot. The hard part was to find everything that was said about Neptune.

Even though his role is significant in the work, he did not appear many times in it. I was looking for a dialog between the two characters but did not find it. I wanted to find out more about Neptune’s personality and life but Homer did not focus on him at all. The part that I struggled the most was the conclusion. It seemed to me that I said everything I wanted and I just could figure out the best way to sum up my essay. I also struggled with the right word choice and the sentence structure.

The Conflict between Ulysses and Neptune in Homer’s “Odyssey”

“Odyssey” is a story about the hero Ulysses in times without war and his full of obstacles journey back home to his family. The story is possible because of Ulysses antagonist god Neptune, who holds a grudge against him and creates impossible situations that Ulysses overcomes and finally arrives home. The plot perfectly fits into the epic model because it is about a hero of significant importance to the Greek nation who possesses extraordinary qualities and goes against an imperious god and wins. Ulysses is the king of Ithaca, who gets lost in his way back home after the fall of Troy. In his adventure on the island of the Cyclops he blinds Polyphemus, who is one of Neptune’s children. Neptune, god of the sea, becomes angry and wants to kill Ulysses. But the gods forbid him to do that because Ulysses is a hero and he needs to go back home to Ithaca. So Neptune swears “he shall have plenty of hardship yet before he has done with it” (Homer 37). And the sea god turns the Phaikians boat into stone and sends storm to wreck Ulysses ship and raft. Even though Ulysses has a strong unpredictable god against him, he is determined to get back home to his family.

And here begins the conflict. Minerva, the goddess that is on Ulysses site, says to him: “Who could surpass you in all manner of craft even though you had a god for you antagonist” (Homer 66). Ulysses and Neptune are two completely different characters. Ulysses is beloved by the gods and by his people. He is the hero from the Trojan War. He is a father and a husband, and this where he draws his extraordinary qualities from. Neptune is a moody evil god that always seeks an enemy. Even though his says his revenge is for his son, the reader cannot easily imagine him as a father figure next to Ulysses. Neptune has several children from different mothers and he has abandoned the Cyclops on the island. Ulysses values his family, whereas Neptune’s nature is militant and he uses the chance to defend his godly position and show off his Olympian powers. The conflict between Ulysses and Neptune is epic because it shows an impossible counteraction.

Normal people are not supposed to go against gods because they inevitable are going to lose. But in “Odyssey” Ulysses has the gods on his site – “This is how we have settled that he shall return to his country and his friends” (Homer 34). And one particular goddess is helping him with all she can – Minerva’s heart bleeds for Ulysses, when she thinks of his sufferings (Homer 4). Gods are helping Ulysses and turn him into a hero. Ulysses hero status would be impossible without the gods. He is in an uneven battle. But his heroism during the Trojan War and his strong character and dedication towards his family win many friends. Ulysses might not have any supernal powers to fight Neptune, but he has extraordinary human qualities that distinguish him from any other man. These qualities make him an epic hero.

Another reason why this conflict is epic is that it is between the good and the bad characters. Ulysses is not only god’s favorite, the humans love him too. Menelaus speaks with great words about him – “What endurance too, and what courage he displayed within the wooden horse” (Homer 25). Ulysses son Telemachus has put his father on pedestal; he calls him a “father of every one of you” in front of the suitors. God Neptune still holds a grudge against Ulysses even after 7 years on the Calypso’s island and this makes him the bad one.

Readers love conflicts between good and evil and consider them epic because the good always wins, even though it looks a lot weaker at in the beginning. Ulysses is the great hero of “Odyssey” that possesses extraordinary human qualities that help him overcome many obstacles. Neptune is Ulysses antagonist and their conflict makes the story possible. Both characters represent two opposites and show strong personalities. The conflict between the two characters holds the whole piece together and creates an existing plot saturated with good and bad heroes and their counteractions. At the end the good wins and this makes the story epic.

The Conflict Between Ulysses and Neptune in Homer’s “Odyssey”. (2016, Dec 26). Retrieved from http://studymoose.com/the-conflict-between-ulysses-and-neptune-in-homers-odyssey-essay 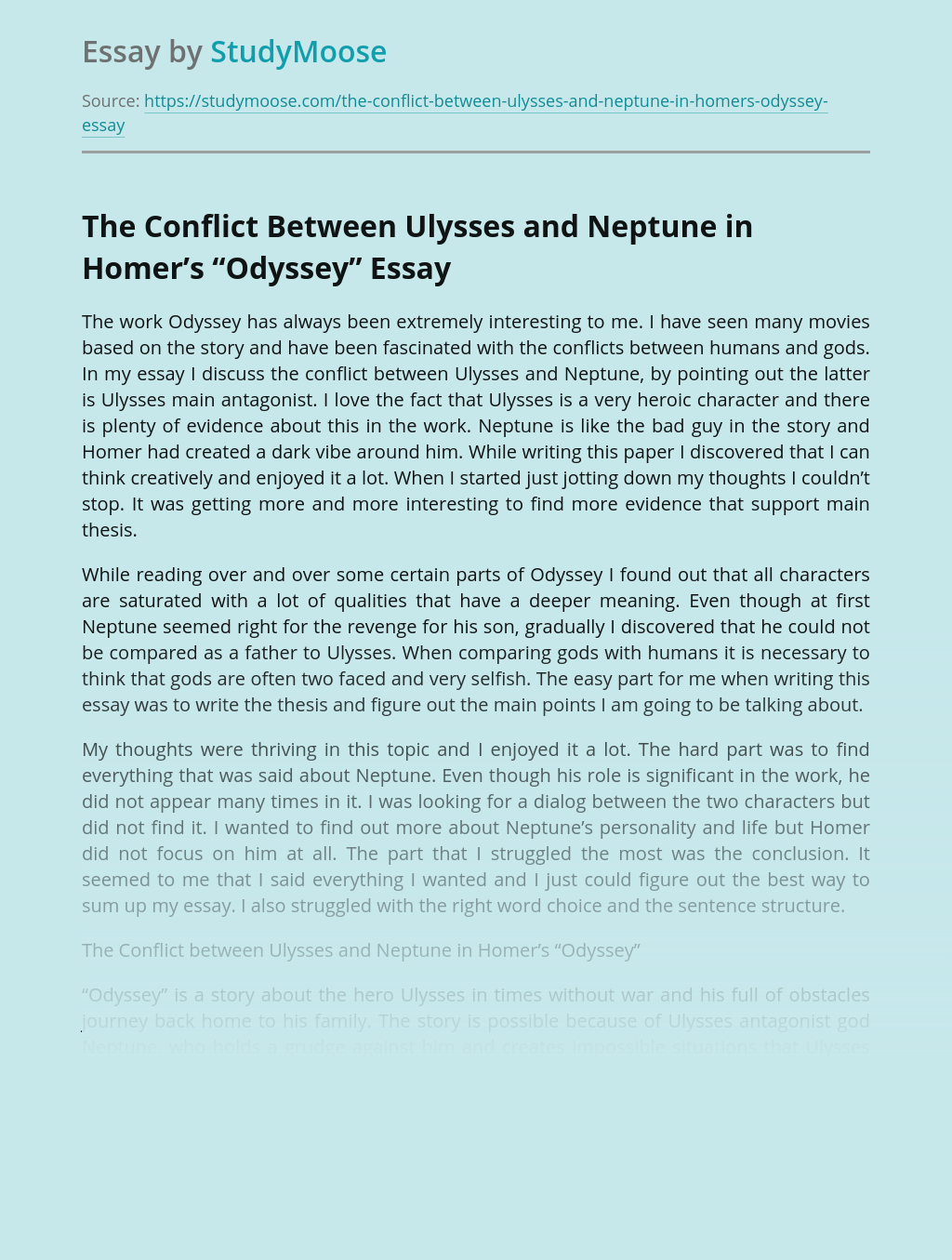 Don’t waste time
Get a verified writer to help you with The Conflict Between Ulysses and Neptune in Homer’s “Odyssey”
Hire verified writer
$35.80 for a 2-page paper
Stay Safe, Stay Original