The Concert for Bangladesh

It was a difficult time in the United States, the war in Vietnam was still raging, and people had grown hardened by the years of blood and violence. Those of us who had grown up watching the daily war horror scenes on the evening news were a touch bunch. After all, our people, most of them only a few years older that we were, were dying every day. The news was right there, photographing and filming the scenes that had became so instiled into our minds that I can still see them, and I still have nightmares about them.

Turn in your highest-quality paper
Get a qualified writer to help you with
“ The Concert for Bangladesh ”
Get high-quality paper
NEW! AI matching with writer

Because of this horror, most people were at their very worst, and their very best.

The Concert for Bangladesh was an amazing act of generosity, since all funds were donated to UNICEF’s relief efforts to aid war victims in Bangladesh.

Our own war-torn country had produced people who cared about the suffering people in Bangladesh. The concert was a remarkable statement about the decency of some of our country’s most offensive, who were at that time considered to be “dirty hippie drug users.

This act of caring and kindness toward our fellow humans on this planet made a permanent impression into my value system. It is for this reason that I would place a film copy of the original concert into our county’s time capsule.

In spite of the war, the musicians involved in the concert were concerned with the dark plight of a place in India and were powerful enough to actually do something about it.

The original charity concert took place long before the famous benefit concerts for Africa or the farmers of the United States.

The artists who performed in the concert have played a major part in the formation of the attitudes of my generation. It’s for this reason that I want future generations to be aware of the concert when they open the time capsule.

The list of performers involved in the concert included musical artists: Bob Dylan, Leon Russell, Eric Clapton, and of course, George Harrison. These musicians became role models to me. They were involved in a very special event, an event that awakened me and other members of my peer group to the suffering of third world countries, and also to a group of people who, because of prejudices about their youthful lifestyles, were believed by older Americans to be worthless. Amazingly,Bob Dylan, one of the “long-haired hippie types” was recently voted as one of the 100 Most Important People of the Century.

If I could enter an item into the time capsule, it would be a copy of the film of the “The Concert for Bangladesh” (shot in 16mm and blown up to 35mm, unfortunately, the film is no longer available on video), if I could find it. It is a filmed concert of a charity event that took place thirty years ago (it quietly celebrated it’s anniversary in 2003), and featured artists with less than pure reputations. I think this film deserves a place in the time capsule as a snapshot of my generation. I hope that future generations will take the time to study the concert and understand what it meant to my generation, and the statement that it still makes about our lives in the 1970s. George Harrison organized this 1972 Madison Square Garden concert, but Bob Dylan steals the show. Clad in faded blue jean jacket, his pudgy face surrounded by a halo of tangled curls, Dylan looks like an Oakie and sings like one, too, warbling, “A Hard Rain’s Gonna Fall,” “Blowin’ in the Wind,” and “It Takes a Lot to Laugh” with a definite twang in his nasal voice. Watching him, I was reminded of the critics who insist that Dylan is always reinventing himself. In this film, it’s hard to recognize him as the possessor of the contemptuous voice that rode “Like a Rolling Stone” to the top of the charts in 1965.

Here, he has revertd back to his pre-electric, pre-polka dot shirt days, and once again inhabits a person reminiscent of Woody Guthrie. His appearance makes this otherwise grainy, unattractive looking film, a cut above the usual rock concert film, although the finest moment is when George Harrison and Leon Russell join Dylan on the chorus of “Just Like a Woman.” If you want to see some history of pop music, you will have to see this concert.

The Concert for Bangladesh. (2016, Jun 19). Retrieved from https://studymoose.com/the-concert-for-bangladesh-essay 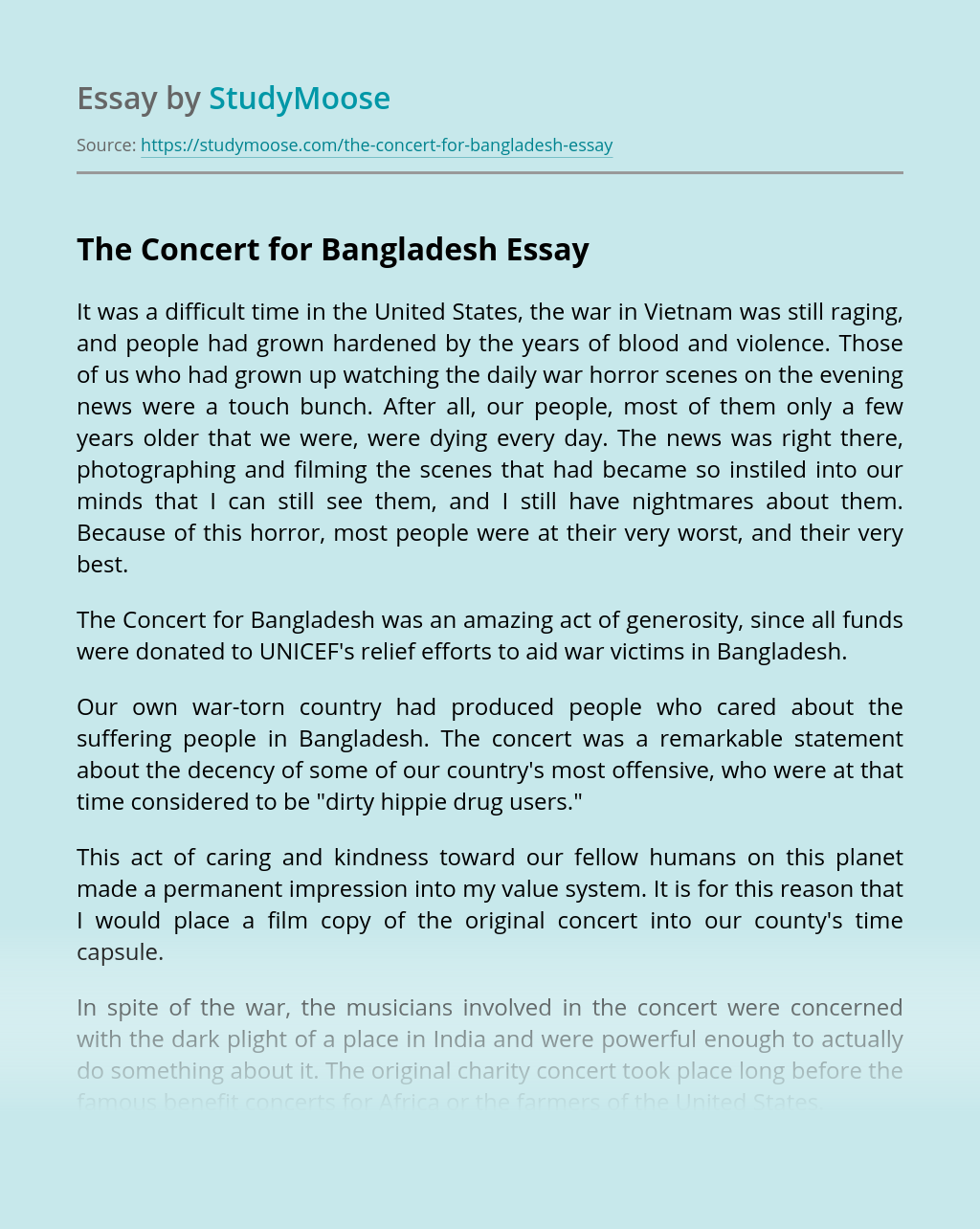 Turn in your highest-quality paper
Get a qualified writer to help you with
“ The Concert for Bangladesh ”
Get high-quality paper
Helping students since 2015
Stay Safe, Stay Original