The concept of social identity

Social Identity is the understanding of who we are, and reciprocally, other people’s understanding of themselves. Richard Jenkins believed that this social identity is achieved through socialization within social groups. He argued that by placing themselves in the role of others, people, particularly children, gain a greater understanding of the role that they should play. For example, a six-year-old girl playing “mommy” with her dolls will, as she gets into the role, begin to understand what a mother expects from a daughter and will, in response, be able to perform her own role as a daughter better.

This is known as the play stage.

Identity taking or role-playing is, according to Tony Bilton, the primary way in which individuals creates and develops not only their social identity but also their personal identity as well. Jenkins noted too that identity is internal, that is, what we think of ourselves, and external, that is, how others see us. He claims that interaction, while a key factor in the development of one’s social identity is not solely responsible for our social development.

Social class is the clear distinction of the division of the population based on economic considerations such as inequality in terms of wealth or income. Karl Marx believed that this situation determined social identities of all individuals within society. Marx viewed class as greater than even gender or ethnicity.

Gender often refers to the socially constructed categories of masculine and feminine.

Society uses these biological differences to assign various social roles to each of the two genders. Such as the age-old concept that women’s place are in the home while men, the providers, must work to support their wives and children. Sociobiologists in particular believe in the naturalistic fallacy, which is because of their genes males and females must act or respond in a specific manner. For example they would claim females are “cloy” and males are “aggressive”.

Ethnicity is a sense of belonging to a particular community whose members share common cultural traditions. Sociologists see this type of classification as the most flexible. It does not rely on biological reasons of explanation but rather points more to persons with common social backgrounds. Ethnicity, like gender and social class is essential in the shaping of social identity because whether we like to admit it or not we are greatly influenced by the people surrounding us. Like the fact that the white North American child born into the middle class will most likely receive a better chance at a highly paid job than their Latin American middle class peers, what society classifies us as will determine who we are in the future, no matter what we say to the contrary.

Bilton found that although “social relationships of race, class and gender are often considered in isolation from each other, in reality they operate together to generate structures of power and inequality” (Introductory Sociology pg 259). A clear example of the importance of these three elements in the construction of social identity is demonstrated within the recent rape of the Pakistani girl~ Mukhar Bibi. You will hardly hear of a girl in the USA being raped because her brother was seen walking in a deserted place with girl of a higher class and a different tribe. Yet the men who committed the rape declared that the girl’s brother had violated the social law of the country and that their honour was at stake. The victim, who is of the Gujar tribe claimed that hundreds of Mastois were outside the building cheering and laughing all while the horrible deed was taking place. Not only does this situation clearly highlight the status of women in Pakistan but it also demonstrates the emphasis that Pakistanis place on class and ethnicity. You are judged not upon merit or personality, but upon your class, gender and ethnic origin.

Throughout the ages, particularly the feudal age, gender has been considered to shape the behavioural patterns of the sexes. Women and men were expected to display similar characteristics no matter what part of the world they came from. However various people have proved such expectations wrong. Ann Oakley (1972) firmly believed that the culture of a society is what determines the type of behaviour displayed by the sexes. I believe that that assumption is right. If one compared the behaviour of a woman in India to that of a woman living in North America one would certainly notice a huge difference in behaviour. The constant demand of liberty for all helps to form female’s identity in North America. They demand and get freedom of speech; movement and can occupy any job in society.

This is not the case with Indian women. Not only when born is a girl considered a liability but she is also treated as inferior to the male of the species. In many cases, Indian women are viewed as possessions. As in the example of the Pakistani girl, “possessions” can be tampered with to teach lessons to the offending family. It is kind of like stealing cattle with the knowledge that the person who owns it will feel upset because they intended to kill it and get some meat. Because of this type of treatment, Indian women tend to be more timid and probably consider an American woman “bold”. They would not dream of interrupting a man while he is speaking far less disagreeing with him, certain jobs are closed to them and their world would more or less revolve around keeping their husbands and families happy.

The realization of one’s gender helps to allow us to fit into society better. A man, for example, would hardly be seen walking into a restaurant wearing a dress. He would carry him in a certain manner, speak in a particular way and certainly would not cover his face running from the restaurant crying if his girlfriend dumped him. If he displayed these characteristics, his family and friends for behaving “feminine” would ridicule him. Acknowledging our gender helps to create our social identities, this involves dressing, behaviour and even movements. It would look very strange to see a man walking with swaying hips. Knowing one’s gender is important to becoming socially accepted.

The act of immigrating to a new country can profoundly affect a person’s social identity. Within a country, the individual is at least given a chance to be himself. He may be treated with contempt because of his social class or gender but he at least knows the social rules of the country to understand why. However, when he immigrates to another country, he will not be familiar with many of the social rules. It is most likely he will not only meet contempt because of his class or gender but also because of his ethnic origin. Bilton gives the example that a West Indian immigrating to Britain in the 1960’s would undoubtedly have faced serious ethnic and racial discrimination.

In response, he would have ended up living in the place where the rest of the population had so thoughtfully given “people like him”. Of course, these places would have probably been a better home for rats. The West Indian would have become withdrawn and insecurity would germinate. Style of clothing may have changed and the individual may have begun to question his values, beliefs, and culture. Because he is of an ethnic minority, his plight might never be considered as important by the authorities of his neighbourhood. Acknowledging ethnic differences are a major part of constructing one’s social identity.

Various persons have realized the danger of losing one’s social identity. As a result, when in a strange country immigrants usually look for persons who came from the same country as them, have the same culture or religion and usually of the same class. Therefore, a poor Gujar from Pakistan arriving in Britain would not look up a wealthy Gujar in hopes that he will allow him to live with him or even by him.

Although members of minorities can be found at all levels of the class structure, it is a fact that immigrants support the highest percentage in Britain within the poverty sector. According to Michael Banton, there is a strong link between an individual’s ethnic origin and social class when discussing how he and others view his place within society.

Social class determines how most people in society will treat us. The beggar will undoubtedly be treated with more contempt than the executive of a business firm will. Social class is usually decided by the amount of income that one receives but it can also be decided by the amount of property one owns or one’s family. For example, a young man in India will rely on his family’s position in society for his social class. This might never change even if he becomes dirt poor. This is largely due to his country’s religious beliefs. As a result, one’s position in the material world might never determine their social class until that person does something worthy to change their social class. Persons in India will have higher moral values than their western counterparts.

To conclude, gender, ethnicity and social class are essential in the development of forming one’s social identity. Knowing our gender helps, we better understand our social roles as males or females in the society that we live in better. Acknowledging our ethnicity and the fact that we are culturally or religiously different helps us to develop national or religious pride, to understand social rules, and to hope that we are treated with cultural relativism rather than ethnocentricity by another society. Accepting our social class can open doors to proceeding higher up the societal ladder. Social class may not always be determined by wealth but also by actions. Social identity is formed by these three elements and can be determined by the treatment of the rest of society.

The concept of social identity. (2016, Jun 23). Retrieved from http://studymoose.com/the-concept-of-social-identity-essay 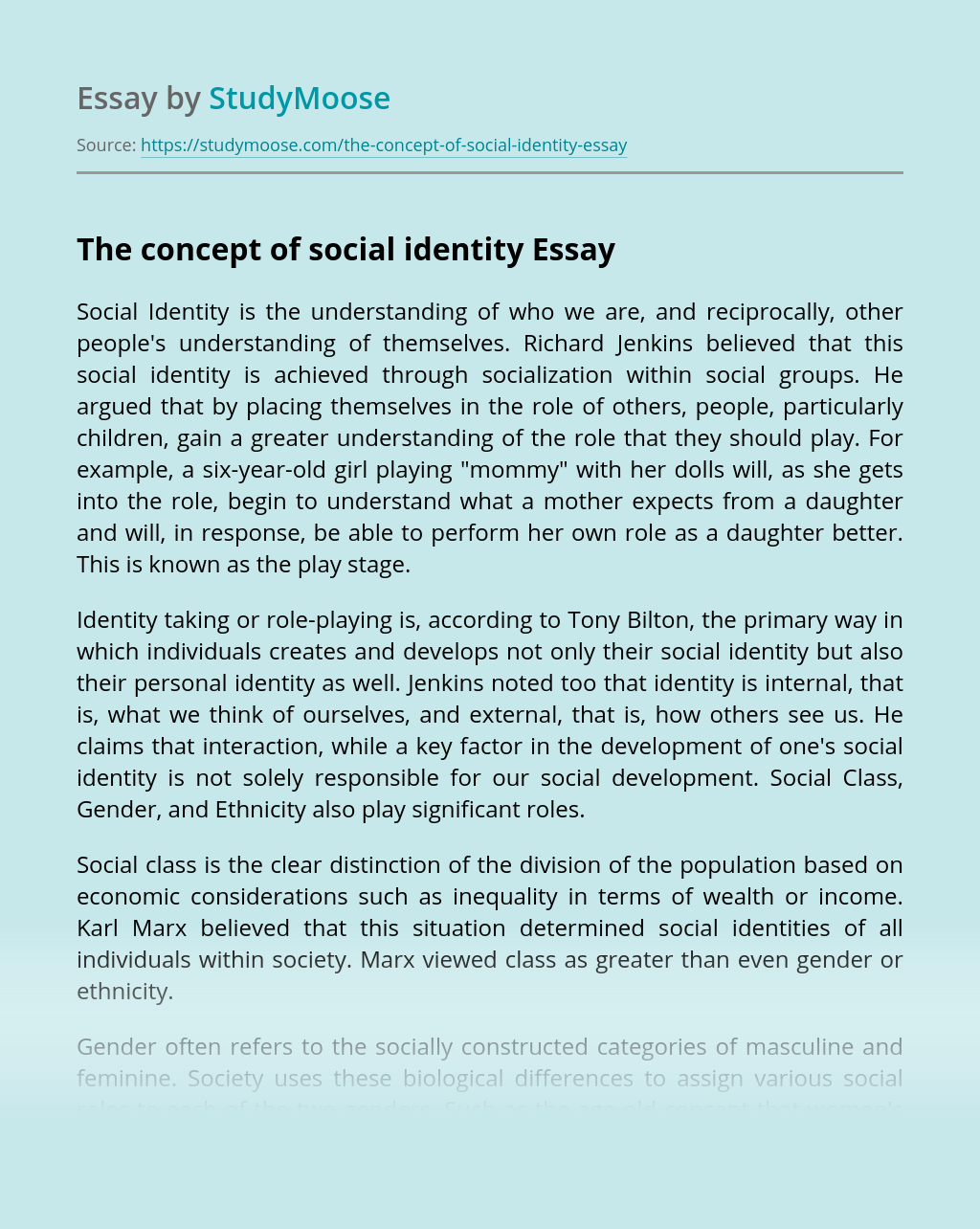 Don’t waste time
Get a verified writer to help you with The concept of social identity
Hire verified writer
$35.80 for a 2-page paper
Stay Safe, Stay Original