The Concept Of Heroism In The Iliad

The Iliad is very vast and complex in the way of its formatting and in the way, it tells its story. The Iliad’s point of view to the setting being only just a few weeks before the end of the Trojan War, there’s a lot of things that it doesn’t talk about that you think Homer would have mentioned in this very poetic piece. For example: Where’s the Trojan Horse in all of this? Why focus the funeral of Hector and not the fall of Troy?

In truth, the story’s focus is on Achilles, the Achaean warrior, and the consequences of his anger.

Don't use plagiarized sources. Get your custom essay on
“ The Concept Of Heroism In The Iliad ”
Get custom paper
NEW! smart matching with writer

His anger goes through what’s like a cycle, ending with the returning of Hector to the enemy for his proper burial. The ending also makes sense for the matter of the foreshadowing of Achilles’s death even though it doesn’t show the death playing out in the story.

Before giving the body of Hector back to the Trojans, Achilles was very ruthless with the body, and seemed to have no intention of returning the body, tying it to his chariot and dragging him about as his wrath was unleashed.

The ruinous lust within him was gifted by Hera, Poseidon, and Athena, for Ilion, the people of Priam, and the folly of Alexandros who insulted the goddesses, when they came to his shepherd’s steading. The other gods however, especially Apollo, took pity on Hector, shielding him from the disfigurement, protecting his skin from tearing, and begging to Hermes to steal him away.

Zeus would agree with the other Gods and have Iris request Thetis to join them and have her deliver a message to Achilles in hopes of having him released for ransom. Thetis, mother of Achilles, would go to her son and deliver him the message for him to reply that if Zeus bid it to let the one appear who would give the ransom and bear the body to the Trojans.

Zeus then told Iris to send a message to Priam and tell him to come alone and bear gifts of ransom to soften Achilles’s heart, that he would be escorted by Hermes in his travel and that he could bring an older companion to steer the wagon that would take Hector home. Priam would speak to his wife about it and then for the love of his son accept the request and begin the journey after asking of Zeus in a wine libation to send his best bird to fly right so that he can know he will be safe in going to Achilles’s shelter. Zeus did so at once. Once arriving at Achilles’s quarters, he would beg and a plea to him to take pity on him and return to him his son in the name of Achilles’s father. He would accept it swiftly knowing that the gods are the only way Priam would have been able to enter unnoticed. Achilles would invite Priam to dine with them for Priam to wish for rest. He also asked Achille’s for a standstill of the war until Hector be buried. Achilles granted him this.

During the night, however, Hermes would wake Priam and warn him of the other Achaeans if they saw him. Fearful of this, Priam woke the Herald and Hermes would guide them out to safety. Priam would continue to bring him home, the people of Troy already weeping for Hector before he could even be fully returned home. The story ends with the lamenting, funeral and beginning of the feast in honor of Hector.

To the concept of heroism, and honor that can result from it, is also one of the major points factoring through the story as you read. Achilles represents the hero and his struggle points around his belief in the honor system, which is opposed to Agamemnon’s reliance on the royal principle. As a fighter which is slain before our very eyes, only this tragic and futile moment is thrown into our minds as a filter to solve the story. Truly though this is shown that our sacrifice can be worth a fight.

To simply put the ending of this book is the theme of war and peace, and the book is essentially an illusion of war. There is a sense of futility built into this chronicle and then pressed against the viciousness. Combined with a small dash to heroism it adds finesse to the fighting. Homer appears both to loathe war as well to glorify it. Similes discuss the peacetime in Greece, as well serve as contrasts to the war, reminding us to some human values that are dissolved by fighting, to also be combined to what is true, and worth fighting over and or worth fighting for,

The Concept Of Heroism In The Iliad. (2019, Dec 13). Retrieved from http://studymoose.com/the-concept-of-heroism-in-the-iliad-essay 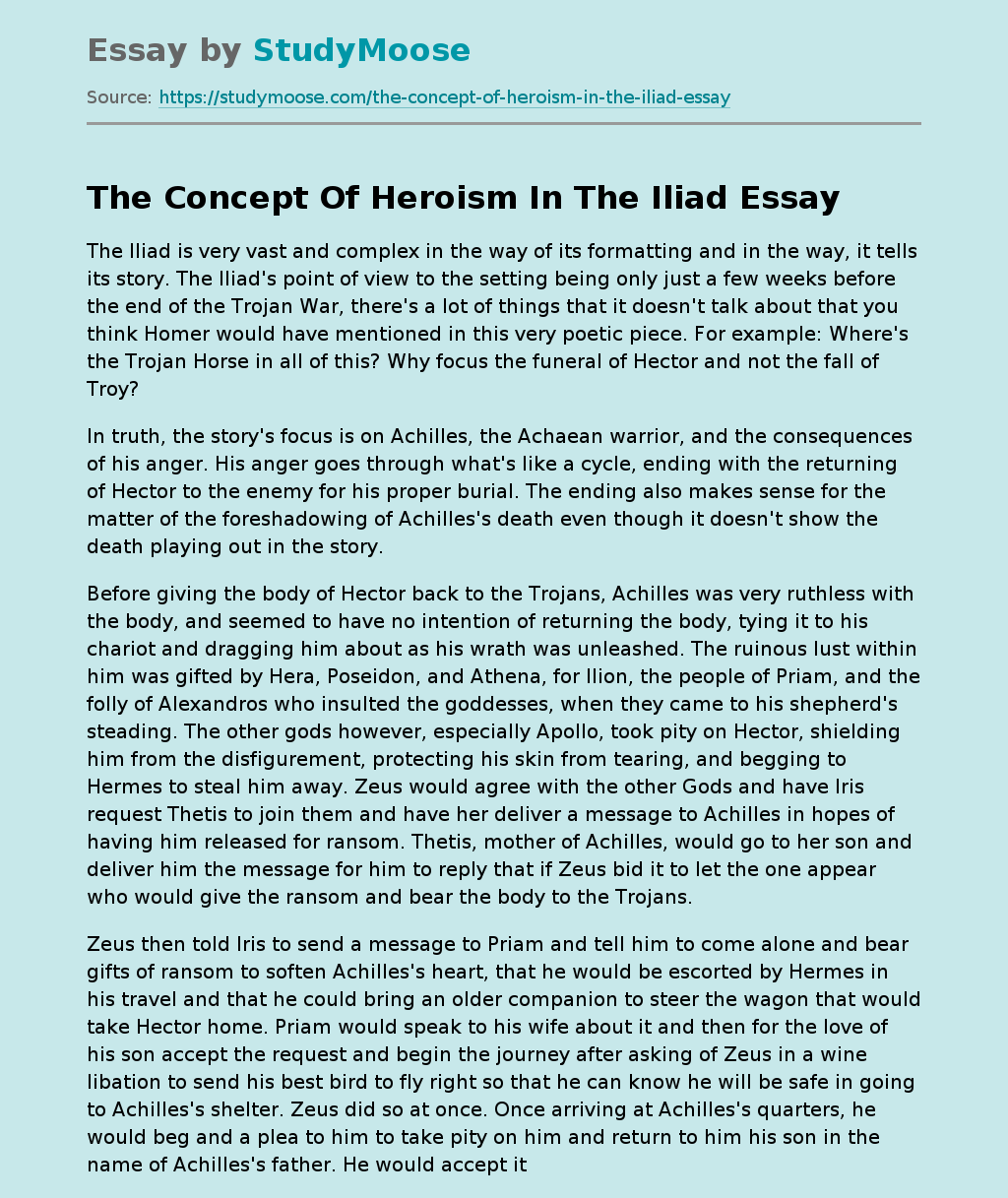