“I believe that are few events in my life which have not happened to many; it is true the incidence of it are numerous…” (43). Olaudah Equiano delivers this proclamation at the beginning of his narrative, The Interesting Narrative of the Life of Olaudah Equiano, which offers an eyewitness testimony of life as a slave. From 1745 until 1797, Equiano endures a variety of geographies; his sojourns include Africa, the West Indies, North America, Europe, Asia and the North Pole.

Don't use plagiarized sources. Get your custom essay on
“ The Coexistence of the Outward Journey of Olaudah Equiano with His Inner Journey ”
Get custom paper
NEW! smart matching with writer

Regardless of place, circumstances, or behaviors towards him, Equiano seizes opportunities to maintain his dignity and become empowered. In this essay, I examine how Equiano’s outward journey from Africa to England coincides with his inner journey from ignorance to knowledge, heathen to Christian, and captive to free. These journeys develop Equiano’s true self, an Englishman who becomes a powerful public voice for the abolition of the slave trade.

At age eleven, Equiano’s idyllic childhood in inland West Africa ends when he is kidnaped into slavery.

On the African coast, he observes his first slave ship, is stripped of his identity and is treated as cargo. From this point forward, Equiano’s presence is solely one of a black slave in a white Western World. Yet, the reader recognizes Equiano as inquisitive child with a strong desire for learning. For instance, during his capture, he recognizes those around him speaking differently. Realizing the benefit of communicating with them, he becomes fluent in a range of African dialects (69).

After leaving Africa, the author spends the major portion his life at sea, which eventually brings him freedom and equips him with many beneficial skills. Equiano first encounters the sea on his passage to the New World. During the hellish existence on the ship, he no longer doubts his fate when he sees a multitude of black people chained together (67). Even during the horrid Middle Passage, the observant and inquisitive Equiano discovers an opportunity for learning. He notices a sailor using the quadrant. The sailor takes a liking to the child, gives him an opportunity to look through the device, and Equiano’s enchantment for the sea is launched. Although he is enslaved, he notices that the fish are free and identifies the sea as a place of freedom (68).

Equiano embraces the freedom he feels at sea over the next twenty years. During his numerous transatlantic voyages, he acquires admirable sailing skills and also recognizes the sea as an equalizer; it becomes a place where his mates view him as a sailor, not as a black slave. He finds the sea profitable, as it enables him to trade goods in various ports; through these trading voyages, he eventually earns the money needed to purchase his freedom. His love for sailing lingers; and even after his manumission, Equiano frequently returns to the sea whenever he has the urge for adventure or the need for money.

Equiano’s first lands in the New World in the hot West Indies, where he hopes to be killed and eaten but realizes that he and the other corralled Africans are now consumer items that will be sold (69). Although initially in the West Indies for only a few days, the observant Equiano immediately recognizes slavery as an institution. Throughout his life, Equiano returns to the West Indies multiple times as a sailor; however, his visits are continuously plagued with misfortune and cruelty. Even when he returns as a free man, the West Indies is a place of humiliation and danger. I believe the brutality and injustice he repeatedly experiences and observes in this geography becomes the major inspiration for fighting for the abolition of the slave trade.

The United State is a also significant destination for Equiano. After his initial brief stay in the West Indies, Equiano is sold to a master who carries him to Virginia. Equiano’s disgust with slave ownership intensifies when he notices a female slave in an iron muzzle. Yet, his persistent curiosity is aroused when as he eyes clocks and portraits as magical, and believes white people are spirits (71). In Virginia, a benevolent British master buys Equiano, gives him a new name, and they sail to England. Later, his sailing expeditions bring him to Philadelphia, where he I sable to purchase his papers of manumission in 1766. Georgia and South Carolina are also frequently on his itinerary after his manumission, but in these states his color brings unkind treatment. He is cheated and abused for amusement, and he finally realizes that in the southern United States, freedom still holds humiliation and danger.

When Equiano is not sailing, he spends the majority of his life in England, and in this country many momentous occurrences shape his life. On the initial voyage from Virginia, Equiano befriends a white boy, and his new friend and benevolent master educate him on the ways of the English. Equiano’s arrival to England is filled with amazement when he spots the buildings, paved streets, and surroundings, which contrast the geography of his other stops (74). His English mates introduce him to the concept of God, which leads to his attending a Christian church, a life of religious study, baptism, and joining the Methodist Church.

Immediately, the culture of the developed island country resonates with Equiano. He appreciates the country’s religious Christian lifestyle, its recognition of intellect and the character of its citizens. In England, Equiano feels most at home and yearns to be thought of as an English Gentleman. In Olaudah Equiano, Englishness, and the Negotiation of Raced Gender, Jocelyn Stitt reveals why Equiano wishes for this identify: “Equiano longs to be in England as a freeman, precisely because this exchange of bodies cannot take place there” (117). He begins to transform himself by learning to read and write, becoming an entrepreneur, and improving his English language skills. Stitt points out these are “all keys to his dignity and self worth” (119). However, even in England, Equiano encounters people who swindle and abuse him because of his color. Later Equiano becomes involved with anti-slavery campaigners and realizes that one of the most powerful arguments against slavery is his own story. In 1789, the industrious Equiano raises enough money to publish his autobiography.

Through this examination of his transoceanic travels, I discover is that wherever Equiano resides, his color makes him vulnerable. Despite this discrimination, he prospers, regains an identity and embraces his color to fight for the abolition of slavery. No matter the geography, his color causes his freedom to be uncertain, but he always owns his knowledge and religious faith.

The Coexistence of the Outward Journey of Olaudah Equiano with His Inner Journey. (2021, Oct 07). Retrieved from https://studymoose.com/the-coexistence-of-the-outward-journey-of-olaudah-equiano-with-his-inner-journey-essay 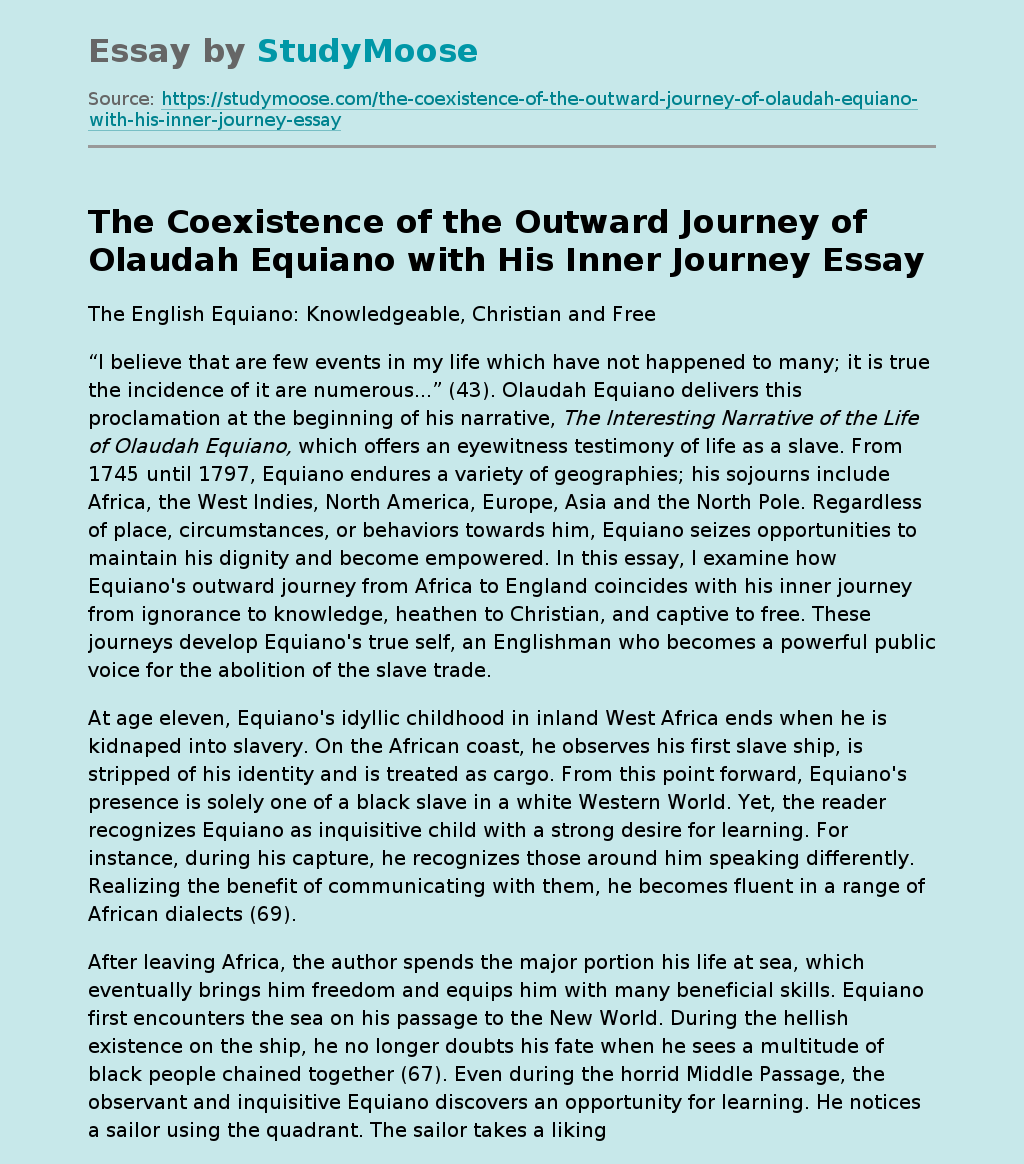