The Ganges is the largest river in India with an extraordinary religious importance for Hindus. Along its banks are some of the world’s oldest inhabited places like Varanasi and Patna. It provides water to about 40% of India’s population in 11 states,an estimated of 500 million people or more, which is larger than any other river in the world. Today, it is considered to be sixth most polluted river in the world.

The Clean Ganga Campaign is a premier awareness function to keep the river pollution free.

Save Ganga Movement is a widespread Gandhian non-violent movement supported by saints and popular social activists across the Indian States Uttar Pradesh and Bihar in support of a free Ganga. The movement is supported by Ganga Seva Abhiyanam, besides those of many other like-minded organisations and with the moral support from many religious leaders, spiritual and political, and social activists.

Ganga Calling – Save Ganga is another such campaign supported by Indian Council for Enviro-Legal Action .

Despite this magnitude of influence and control by the river over present and future of the country, it is allegedly under direct threat from various man made and natural environmental issues. A number of drives have been undertaken, in which the river was reported to have been cleaned, municipal corporation urged people to refrain from polluting. Recently, Prime minister Narendra Modi affirmed to work on pollution of the river.

A sizeable proportion of the effluents in Ganges are caused by this population through domestic usage like bathing, laundry and public defecation. Countless tanneries, chemical plants, textile mills, distilleries, slaughterhouses, and hospitals contribute to the pollution of the Ganges by untreated toxic and non-biodegradable waste into it.It is this sheer volume of pollutants released into the river every day that are causing irreparable damage to the ecosystem and contributing to significant sanitation issues.

Now these problems are huge on their own but couple with this with fact that India’s holiest river, specifically at the banks of the ton of Varanasi, is considered as thepilgrimage site with tens thousands of pilgrims entering the city every month to bathe, wash, sip and drink the water. The river is now a leading cause of infant and child mortality rates, skin problems and some more, serious disabilities .

Ganges river pollution is getting seriously bad( as you may have now noticed) and something needs to be done now.A solution however, seems far away with gross negligence, ignorance and stupidity pouring from every sect of Indian society from Government, the people and of course big business which still continues to rape India and her people at every level. But, all hope is not lost and there does seem to be some hope on the horizon for the serious case of the Ganges river pollution. The world bank has agreed to loan India al most $1 Billion to clean up the Ganges – Not an insignificant amount by anyone’s standards.

What is more, some of the claims made b y Hindus about the rivers purifying effects do have some basis in science. The river is thought to be especially full of ‘acteriophages’… little things that destroy bacteria specifically those known for causing cholera and dysentery epidemics.

The river also has a unique ability to hold and retain oxygen in record amounts. Although nobody knows why, this doe mean that things can still grow.

The Clean Ganga Campaign. (2016, May 12). Retrieved from http://studymoose.com/the-clean-ganga-campaign-essay 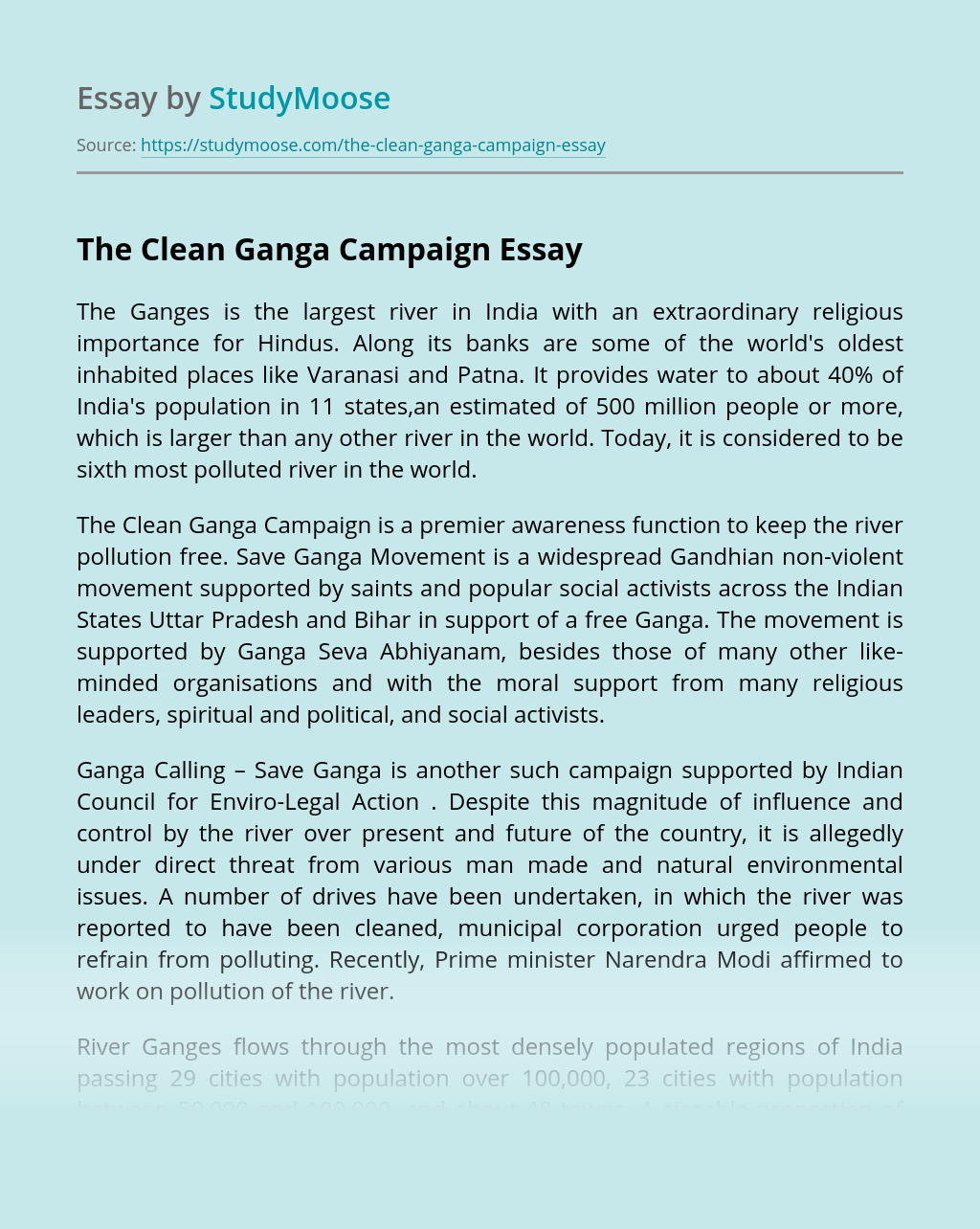 Don’t waste time
Get a verified writer to help you with The Clean Ganga Campaign
Hire verified writer
$35.80 for a 2-page paper
Stay Safe, Stay Original