The Civil War was a civil war fought in the United States that began in 1861 between the North and the South, where slavery was a major cause of disunion. Lincoln was who fought for the legal status of slaves to free and end the slavery in America. Also, Lincoln declared that He would do everything necessary to keep the United States united as one country (American Battlefield Trust). Civil War changed many lives making the women to involucrate in their own roles, slavery played a big role during that era, and betrayal was a solution to recover their families traditions.

Don't use plagiarized sources. Get your custom essay on
“ The Civil War was a civil war fought in the United States ”
Get custom paper
NEW! smart matching with writer

However, at that time starts Gone with the Wind an American epic romance film. Gone with the Wind is the most famous novels in the Civil War and one of the best-selling novels of all the time. This historical novel illustrates a coming-of-age story. Scarlett O’Hara is the protagonist of Gone with the Wind, and the novel follows her life through the war and Reconstruction.

Scarlett’s mind is her greatest asset. Although her education is sketchy, but she has a sharp intelligence and learns to imitate the graces of a lady to hide her inner self (Rentz). Gone with the wind was settling in Clayton County and Atlanta, both in Georgia. Margaret Mitchell grew up in Atlanta, Georgia who became a journalist. For Mitchell, this novel is unique because is about an independent woman and Scarlett O’ Hara, who shares many characteristics with herself. Both are that kind the women that have a great strength overcoming all adversities no matter what.

Scarlett plans were tries to recover her familial home of Tara, a plantation which has fallen into disrepair after Atlanta was burned. Through the civil war, slavery was a major problem between South and North. Southerners during this era wanted to keep their slaves, while the North was fighting for free slaves. According to Ashley words. The people who have brains and courage come through and the ones who haven’t are winnowed out (A research guide). Following this, he recognizes that slavery was separated for Old South and North. The main purpose of this film was about civilization in the South being moved away by invasion the Yankees during and following the U.S. Civil War.Gone with the wind the main theme is that of survival in times during which traditions, ways of life and thinking, even love, betrayal and understanding are Gone with the Wind. In this film, Scarlet was a smart woman who overcomes all challenges of adversity in her own way, betraying her own sister to survive the war and fight for her family tradition. Margaret Mitchell started writing this novel in 1926 but came out just three years later, which production was very difficult from the start. Also, the script was checked out by many writers in an attempt to get it down to a correct length. However, the cinematography was filmed for Technicolored. This film became the most popular ever created by Hollywood and won 12 Academy Awards in 1940. Gone with the wind have symbols as Tara, the O’Hara family plantation, symbolizes the traditional Southern way of life. Rhett Butler symbolizes the tense relationship between Old South and the New North, supporting the Yankees and having an allegiance with the North. Atlanta became vital to the South during the war because of Southerners supported the reconstruction era. Gone with the wind is for that kind the people who identify with the war in times of survival, love, and traditions. There are many strengths and weakness in Gone with the wind. According to strengths, this film was brilliant because each photography was colorful and has great background music. Also, received positive reviews even when was delayed. This film is about a fantasy romance because Scarlett ending the Civil War realizes her truly loves for Rhett. However, as any film has a weakness Gone with the Wind its weakness is Scarlet never took care of her children, her focus was the ambitious and betrayal to get the Tara plantation. Also, black people were not allowed to assist in the film’s Atlanta premiere. This fact might be affected the black viewers because they can take it as racist but Hattie McDaniel, known for her role as “Mammy” in Gone with the Wind won a Supporting Actress Oscar for her performance and showing that black people are successful. Gone with the wind was a realistic and accurate film showing how black and white people had a different role on the plantation. Slaves were treated very bad for their different color. For example, the white slaves had a good place and recreation, but black slaves had a place of work very poorly. Throughout the Civil War, many things were destroyed, one of them was Southerners life. For this reason, Scarlett had many marriages for conveniences because her life was destroyed by the Yankees. As a result of these tensions between South and North, the civil war divided the country. So, The Confederacy won key battles and since that many changes came as the emancipation of slaves

The Civil War was a civil war fought in the United States. (2019, Aug 20). Retrieved from https://studymoose.com/the-civil-war-was-a-civil-war-fought-in-the-united-states-essay 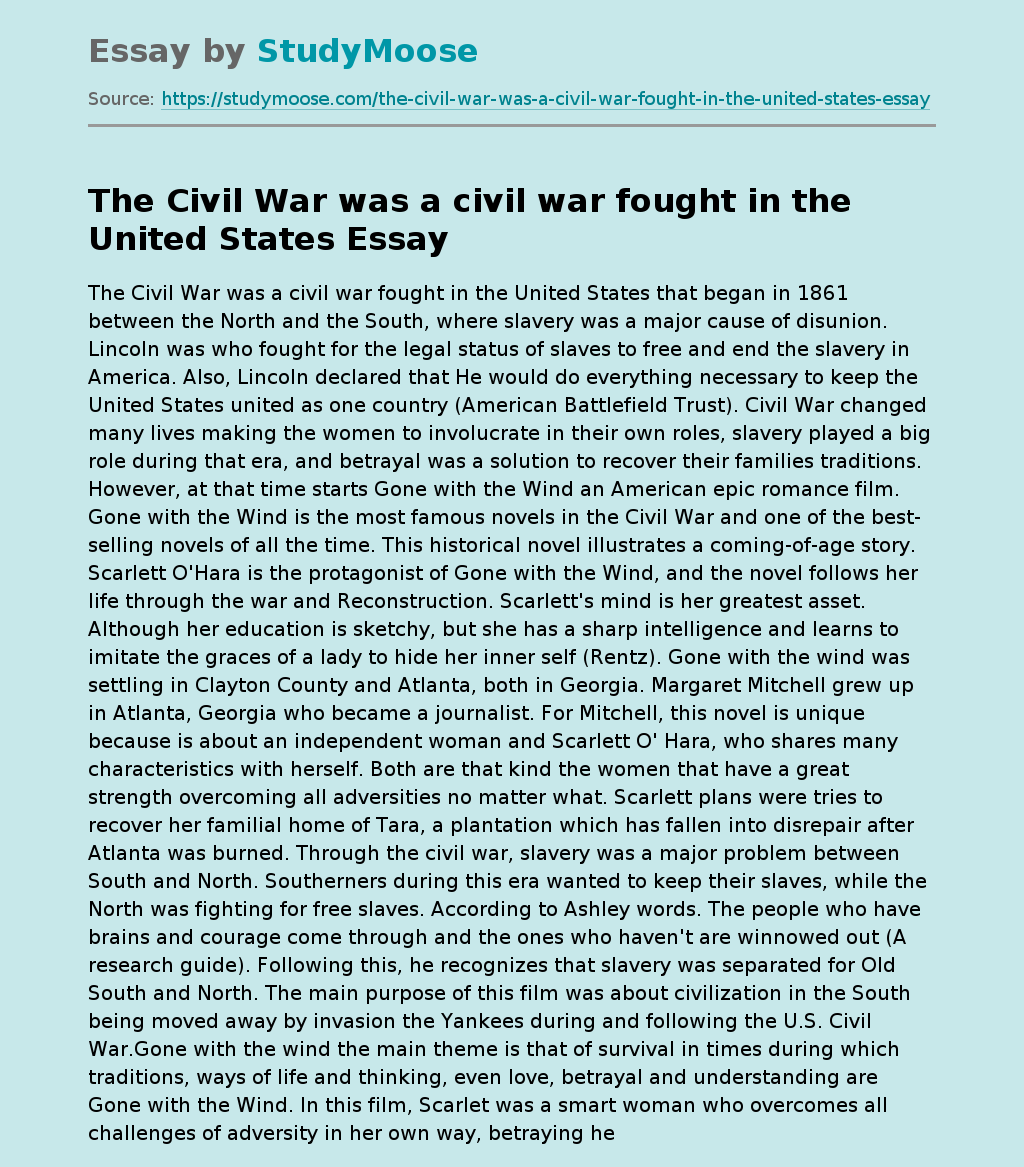