In Herman Melvilles Billy Budd, the Christian symbolism can be baffling at certain points of the novel. In Chapter 18 Melville writes, Then would Claggart look like the man of sorrows, a biblical allusion relating to Isaiah 53: 1-5, in which Jesus is characterized as the man of sorrows. Thus, is Claggart, the apotheosis of evil, also an angelic body (Timmerman 28)? Because Melville writes so ambiguously in Billy Budd, there will always be several different interpretations and analyses. For example, in the battle between good and evil, Melville asserts that good people must die in order to stop evil through his use of biblical symbolism in Claggart, Billy Budd, and Captain Vere.

Don't use plagiarized sources. Get your custom essay on
“ The Christian Symbolism in Herman Melville’s Billy Budd ”
Get custom paper
NEW! smart matching with writer

In Melvilles Billy Budd, Claggart, the Master-at-Arms aboard the Bellipotent, is a symbol for evil or Satan. John Claggarts name characterizes his role in Melvilles novel. His common English given name paired with the harsh, cacophonous name of Claggart typifies his role as a conniving figure of evil. The fact that Claggart is evil is inevitable because the physical descriptions of Claggart are less appealing than those of Billy Budd, the ideal of an uncorrupted man newly aboard the Bellipotent, and help indicate his evil nature (Smith).

The narrator describes Claggart by stating, his complexionthough it was not exactly displeasing, nevertheless seemed to hint something defective or abnormal in the constitution and blood (qtd. in Smith). Smith helps explain that its not hard to tell that Claggart is evil because his appearance signals the other characters and reader about his evil nature.

Typically, people relate outward appearance to inward characteristics, motives, and values, such as in Claggarts case. Claggarts evil-minded nature with something defective or abnormal in the constitution and blood, has always been present to destroy the plan of good. Claggarts evil is born within him and innate, and its appearance is always stimulated by resentment and jealousy. Therefore, Claggart starts his allurement of Billy with clever and devious adulation. Claggart tells Billy, Handsome is as handsome does. However, he always speaks with a devilish spin as he gets ready to mar the imbedded decency which he naturally cannot comply with. In the end, Claggarts prolonged bubbling deception eventually bursts into the excitable accusation of Billy as the leader of a mutiny (Timmerman 31-32).

Melvilles use of biblical symbolism in Billy Budd as Jesus helps counterpart the evil, satanic opposition of Claggart. The role Billy plays in the novel is only one of the many ways Melvilles novel can be interpreted. For example, Robert W. Watson, a former member of the English Department at the University of North Carolina at Greensboro argues, Regarding Billy Budd, Melville describes the handsome sailor as though he were Adam, and many others would agree. However, many examples in the text highlight Billys correlation to Jesus Christ. We first find evidence that Billy symbolizes Jesus when Captain Graveling of the Rights of Man describes Billy as a peacemaker, not because of preaching or teaching, but because of his very presence. Graveling says, A virtue went out to him, sugaring the sour ones. Melvilles combination of a peacemaker, a word often associated with Jesus Christ and his actions, and virtue embellishes Billys symbolic affiliation with Jesus Christ (Timmerman 30). Also, just as Jesus was a role model as a pure, uncorrupted man, the seamen see Billy as an archetype of pure manliness and maturity (Mottram 231). Another supporting factor centers on Billys physical appearance. Billy possesses no physical blemish, just as Jesus Christ in the Old Testament could obtain no physical blemish of any kind (Timmerman 30). Lastly, Billy Budds ambiguous ancestry puts him in this conclusion. When asked about his upbringing, Billy answers by saying, God knows, Sir. In writing this, Melville describes a response similar to Jesus mysterious answer in front of Pilate. Billy is described as a fondling, a presumable by blow; however, noble descent was as evident in him as in a blood horse. So, Billy may be the illegitimate offspring of unmarried parents, but Melville makes the presence of something special, even divine about him apparent.

Melville use of biblical symbolism in Vere, the captain aboard the Bellipotent, as God helps accentuate the truth that good people must be sacrificed to stop evil. Vere is a man who does things by the book. When Claggart accuses Billy of mutiny, Vere doesnt simply dismiss the outrageous accusation, but he has him repeat it with Billy in the room. Billy, unable to express his words due to his stuttering problem, strikes Claggart dead. At this point, Vere says, Struck dead by an angel of God! Yet the angel, must hang! David Kirby, an English professor at Florida State University, believes even before he [Vere] calls the drumhead court, Vere knows what sentence is mandated by naval

regulations (51). However, it is clear that Vere feels sympathy towards Billy Budd. Vere faces a conflict between his individual self and the role of society. John H. Timmerman, a professor of English at Calvin College, writes the following:

In such a position Captain Vere stands typologically for God the Father who must extend mercy and must exact retribution. The mercy in this is to the group of sailors at large on this microcosmic world of the sailing vessel, and it is made possible only by the expiation of the crime through Billys death. (34)

With the weight of his men being accused of mutiny, and the judgment he would certainly face if Billy was to be undisciplined after killing a shipmate, Veres only solution is to supply mercy to his men and punish Billy at the same time.

So, Veres decision is not as easy as it may seem. Barbara Johnson, a former professor of English and Comparative Literature at Harvard University believes, as a political allegory,

Melvilles Billy Budd is thus much more than a study of good and evil, justice and injustice (247). Vere must make a decision in order to save his seamen for the charge of mutiny and punish Billy for murder. Consequently, the only way to do this is to sacrifice Billy for the greater good of the men aboard the Bellipotent. To support this, Timmerman writes the following:

Biblically, this terrible paradox of the crucifixion in which a just and loving God permits his son to die to expatiate a crime is precisely consonant with the Vere-Billy relationship. A price must be paid in each instance, when the longing is for mercy. But the act of retributive justice may be the more merciful if by it the mankind (the men of the ship) are delivered from judgment (the charge of mutiny). (34)

With this said, Billys being sacrificed by Vere, who saw Billy as his son, for the mercy of his shipmates and their accused mutiny is parallel to God sacrificing his only son, Jesus for the mercy of the entire populations sins. The sacrifice is only on a smaller scale. Billys being sacrificed helps to make his symbolic role as Jesus concrete. Also, without Claggart, Billy and Vere would never be in the arduous situation they have to deal with. Therefore, Claggart plays a major role as the satanic figure who leads Billy to be sacrificed by Vere, but is ultimately defeated.

Although the implications in Melvilles Billy Budd are ambiguous, clearly there are various literary experts and critics that can agree on different themes, symbols, and morals. Melvilles use of biblical symbolism comes together to assert the timeless truth that good people (Billy) have to die in order to stop evil (Claggart). Every character in Melvilles novel plays an essential part of the story, and in the end, it all leads to Veres decision to crucify Billy. Veres decision may not have been the one his heart was telling him to choose, but clearly he chose wisely when he listened to his mind and sacrificed one for the greater good of all. 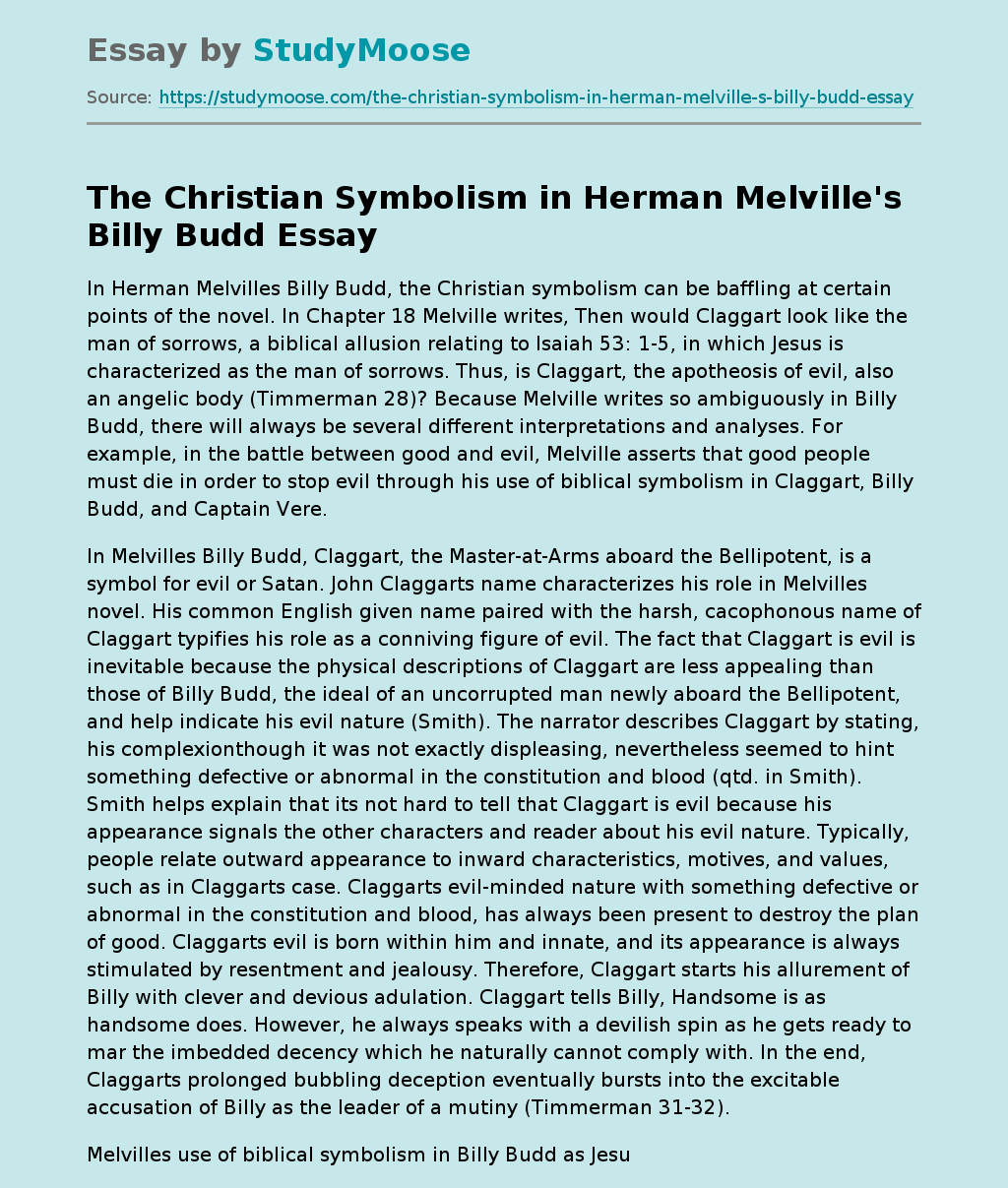