The Chinese in All of Us

Richard Rodriguez, a gay author and the son of Mexican immigrants, was born in Sacramento, California. He was best known for writing autobiographies of his experiences about life and lessons learned. Hunger of the Memory was one of the autobiographies he was best known for. Richard contributes his love, inspiration, and appreciation for personal essay to four of his greatest influences, Joan Didion, William Saroyan, James Baldwin, and George Orwell. Another one of the autobiographies he wrote was The Chinese in All of Us.

Don't use plagiarized sources. Get your custom essay on
“ The Chinese in All of Us ”
Get custom paper
NEW! smart matching with writer

The Chinese in All of Us talks about multiculturalism and how much people think America is supposed to be only one culture. He’s trying to make a point of us as individuals are any culture we want to be, and any culture makes up America.

In The Chinese in All of Us the author Richard presents us with a different points of view about what people think America should be. In the story Richard says, “I AM MY CULTURE” and “Culture is not something opposite us, it is rather something we breathe, sweat, and live.

” When I think of his statement, I think he’s referring to individuality. According to the dictionary individuality is defined as the particular character, or aggregate of qualities, that distinguishes one person or thing form others; sole and personal nature. I truly believe his statements are accurate because America is a melting pot of all cultures and there is no one can tell me otherwise. If it were not for different types of people coming over from other countries, we would not be the America we are today.

The author uses an anecdotal form of writing based on his experiences. Throughout his experiences he says he has had so many people judge him based on the color of his skin or because, up until the age of six, his primary language was Spanish. People considered him traitor, and a sell out because of the autobiographies he wrote, but he was just being true to himself and spilling out his heart to us that wanted to listen.

In conclusion based on his experiences I think the author Richard Rodriguez had a great point of view on multiculturalism that he experienced throughout his lifetime. He makes it a point that just because we are born in America doesn’t mean we have to act or live any particular way. Personally, I believe one’s color does not define them. I was born in America to one Mexican parent and one American parent. I love both cultures equally, and I define myself as a Mexican-American, but I do not think that someone else could define me in another way based on how they see me on the outside. Just like the author, my experiences that I’ve gone through make me who I am and his analogy of being Chinese was great because that is how he feels. This is America the land of the free, and if that is how he felt. I support him one-hundred percent.

The Chinese in All of Us. (2021, Dec 09). Retrieved from https://studymoose.com/the-chinese-in-all-of-us-essay 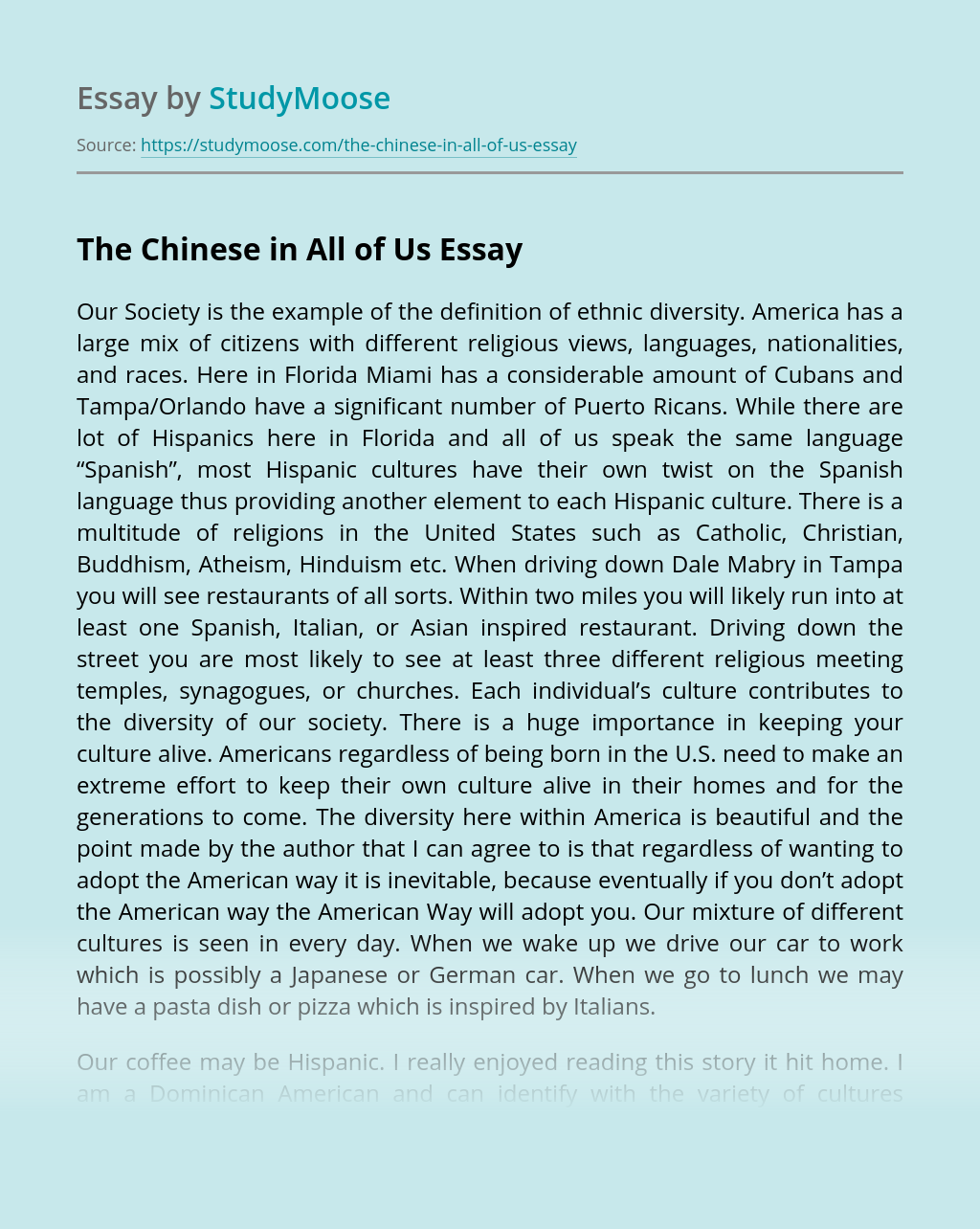