1: Chapter 1 introduces King George III and the conditions in England prior to and during the deployment of British troops to Boston. Described as “a person of simple tastes and few pretensions,” the king is shown to slowly feel disdain towards America.

2: Chapter 2 depicts the conditions in America. It outlines the leaders of the army and a few who were representing the colonies. It described the American army to be made of “undisciplined, poorly armed volunteer force of farmers,” with morale decreasing continually until the New Year, 1776.

Turn in your highest-quality paper
Get a qualified writer to help you with
“ 1776 by David Mccullough: Chapter Summaries ”
Get high-quality paper
NEW! AI matching with writer

3: Chapter 3 started out with the British point of view. Still unimpressed by the American army, they chose to ignore warnings of attack. This chapter recounted General Knox’s expedition to Quebec to retrieve French artillery and later, the planned siege of Boston and Dorchester by the Americans.

4: Chapter 4 follows the rushing Americans to the under defended New York (where the British had escaped to), still focused on the unruly manner of many of the soldiers of the Continental Army.

The chapter chronicles the events taking place in New York on the American side and the drafting of the United States Constitution.

5: Chapter 5 opened with a description of a horrible storm that killed many army men and the British takeover in New York City soon after. Seemingly without hope, the Americans retreated. The British army had the advantage of good discipline, artillery, leaders, and hygiene over the rugged Continental Army.

6: Chapter 6 follows the story after the British takeover of New York City. Prospects weren’t looking good for Washington, as he is close to losing faith in his soldiers; some were acting rowdy, deserted battle, and are losing hope themselves.

There were shortages of food and clothing and plenty were sickened with diseases. With the British showing no signs of mercy, the future looked gloom until an act went too far.

7: Chapter 7 continues the desperate time for Americans. They hatched a special attack to catch the enemies off-guard in Trenton, New Jersey the morning after Christmas. After the American victory, the British sent reinforcements thought it ended with the same results. This was the turning point for the American revolution, as Washington is able to convince his men to stretch their enlistments.

1776 by David Mccullough: Chapter Summaries. (2017, May 21). Retrieved from https://studymoose.com/the-chapter-summaries-of-1776-by-david-mccullough-essay 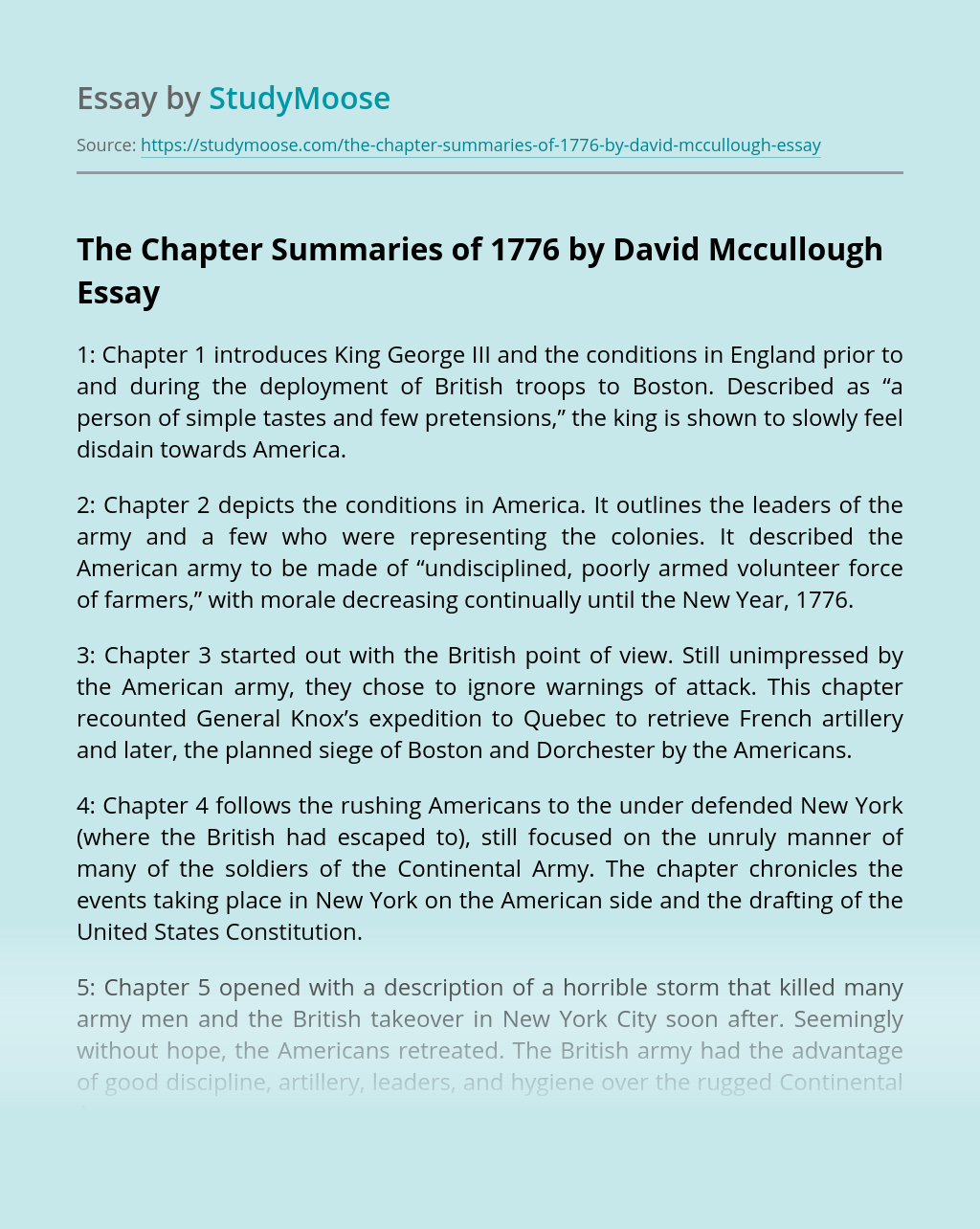 Turn in your highest-quality paper
Get a qualified writer to help you with
“ 1776 by David Mccullough: Chapter Summaries ”
Get high-quality paper
Helping students since 2015
Stay Safe, Stay Original