The Censorship of Huck Finn

The Adventures of Huckelberry Finn has been called one of the greatest pieces of American literature, deemed a classic. The book has been used by teachers across the country for years. Now, Huck Finn, along with other remarkable novels such as Catcher in the Rye and To Kill a Mockingbird, are being pulled off the shelves of libraries and banned from classrooms. All the glory this majestic piece by Mark Twain has acquired is slowly being deteriorated. This is occurring because some say it does not meet “today’s” politically correct standards.

Don't use plagiarized sources. Get your custom essay on
“ The Censorship of Huck Finn ”
Get custom paper
NEW! smart matching with writer

This is an immense disturbance to all who have read and cherished Huckelberry Finn and know this work’s true meaning. Censorship, as defined in the dictionary, is, in the case of a book, to take out things thought to be objectionable. Censorship is far more than that. This mere word prohibits us from all things branded with its mark. In this instance of The Adventures of Huckelberry Finn, it takes away an American treasure, and more importantly, defies First Amendment rights.

Those who find Huck Finn distasteful and unappropriate are trying to brand this work, by censorship, and make it unjust to read.

This is similar to a farmer trying to brand his mark upon a bull, with those against Huck Finn as the farmers and Huckelberry Finn is the bull. As most know the bull never goes down without a fight and won’t allow thje farmer to branded, just as the supporters of Huckelberry Finn will not just be taken down passively.

The main reason Huckelberry Finn is being subjected to such scrutiny is because of the way Twain portrayed “nigger” Jim, and his use of the racial slur. The Anti-Huckelberry Finn feel that it is to uncomfortable for African-Americans to read the book and think they are being stereotyped into Jim’s image.

Though some find it wrong for this American treasure to remain available due to its racism, this is not the case. Even though the word “nigger” is used over 200 times in the book, it was common for African-Americans to be referred to as this during the period of the book and the time the book was published. Those trying to have Huckelberry Finn censored are also opposed to Jim being portrayed as “an uneducated man, very superstitious, infantile, passive, and generally uncultured,” as written by Frank Ritter.

These ideas may at first seem like the basis for a good argument , but it is later apparent that these discriptions coeinside with the feelings about African-American slaves at the time. For this reason there is no way that Huckelberry Finn can be charged with not living up to today’s standards. The racist ideas put forth in Huckelberry Finn, horrid as they may be, are part of America’s past. Reguardless that it was in the past, it should not be lost, but utilized to see the wrong done to this group of people and to learn from it to better life today. In the four articles there were many contrasting ideas and different approaches to Huckelberry Finn and the case surrounding it.

Though there were a few points made against Huckelberry Finn, the general feelings and logic of the articles was that the book should be left, “as is. ” This was clearly stated by Frank Ritter in him saying, “the present-day objections to Huckelberry Finn are absurd. It is idiocy to go back and apply to novels written more than 100 years ago the standards that prevail today. ”

In that same article, John Wallace’s ideas on the teaching aspect of the book were more than irrational. He called the book, “the most grotesque example of racist trash ever given to our children to read…,” and then continued on to verbally abuse teachers in the past and those who will use Huckelberry Finn in their classes. The four articles though offering some help to the offense, defend Huckelberry Finn in many more ways.

This idea was best put forth in the Seattle Times article, in the part speaking of the english teacher who has assigned the bood for 28 years saying, “the book has a ‘raw edge’ and that some of the language is offensive, but the positive value far outweighs the negative. ” The Adventures of Huckelberry Finn should not, in any way, shape, or form, be restricted from readers and students.

This great American novel is part of our history, a part of history that has lasted and been passed on from generation to generation. The passing on not of racism, but of a way to learn about the past and to learn from it. English classes, as well as readers, have utilized this book to better understand the way of life on the Mississippi in the first half of the 1800s. Huckelberry Finn is not only a good way to teach literature, but also to help people open their eyes and see what life was really like. More importantly to learn from the mistakes made in the past.

Those who haved picked up this book have used it to become not hating and racist, but further educated and more understanding people. In censoring this classic, the First Amendment rights which are so priceless to our country, would debase them and our entire American way of life. This incrdible masterpiece of 1800 America would be forgotten if censored. This would do away with all the morals our country stands for and obliverate the book’s incredible author. There are many ways around censoring this work and the bull will not go down without a fight. This awesome piece of art, known as The Adventures of Huckelberry Finn, won’t be vanquished.

The Censorship of Huck Finn. (2016, Sep 06). Retrieved from http://studymoose.com/the-censorship-of-huck-finn-essay 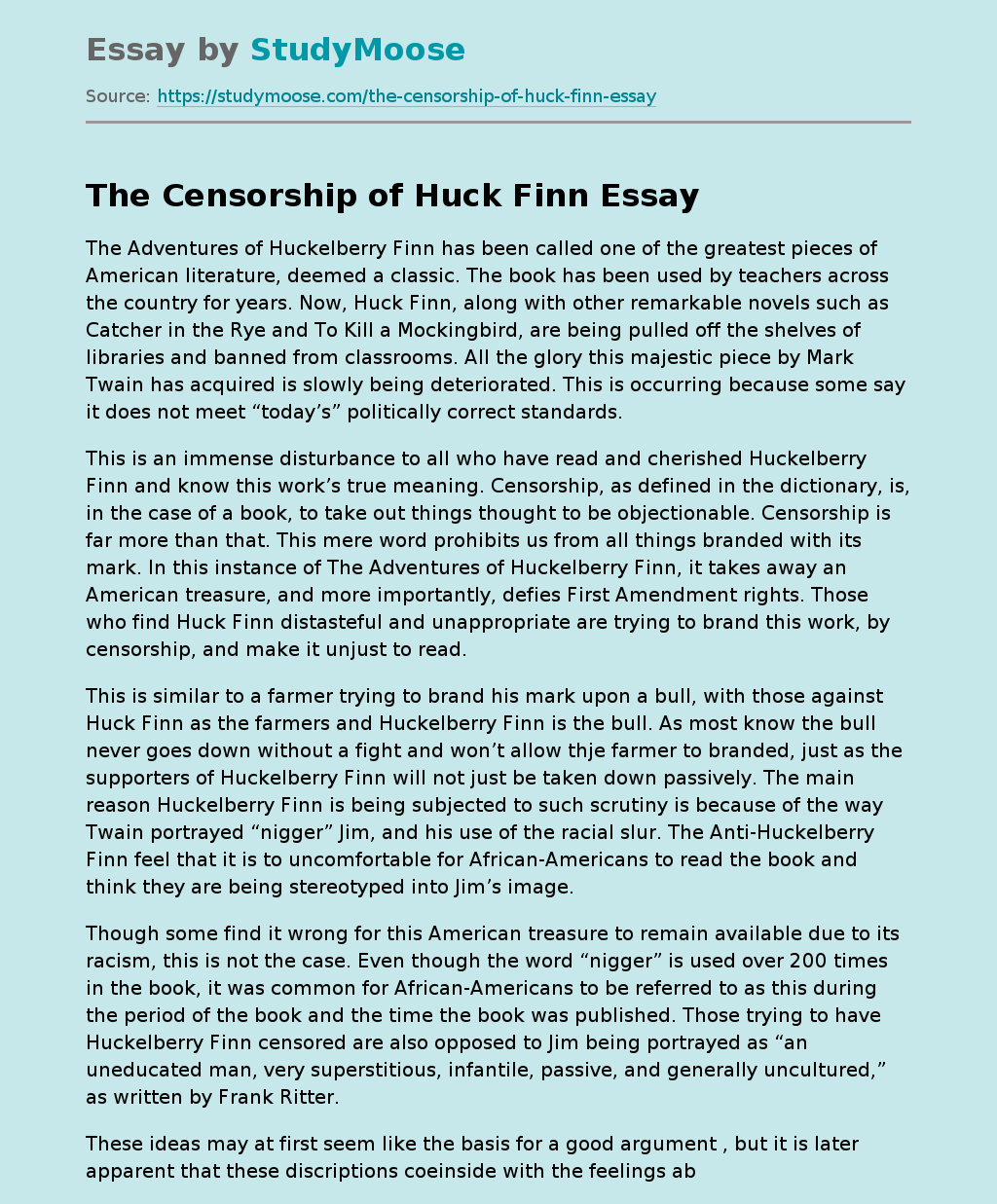