The Celebrity Influence on Teens of Today

n today’s media, many people are exposed to material they see or hear which affects their choices on a day to day basis. Teenagers are the most common victims of the media because they are so vulnerable. One of the main causes of this media influence on them is celebrity behavior. Celebrities can change how a teen looks at him or herself in the mirror. They can also have an effect on a teen’s choices in bad habits. They have the power to persuade teens into unrealistic shopping.

Don't use plagiarized sources. Get your custom essay on
“ The Celebrity Influence on Teens of Today ”
Get custom paper
NEW! smart matching with writer

Teens can also start thinking that it is easy to become famous by attracting the wrong attention. Although teenagers can learn about their society through celebrities, the media can provoke negative issues in self-esteem, habits, shopping and personality.

Firstly, it is a well known fact that the majority of celebrities seen through the media have ‘too perfect’ bodies that teens feel is the ideal image for their society. The impact of this idea is unhealthy both emotionally and physically and can lead to many problems such as depression or anorexia.

Michelle New a PhD in Kids Health states, “Most celebrities in advertising, movies, TV, and sports programs are very thin, and this may lead girls to think that the ideal of beauty is extreme thinness. Boys, too, may try to emulate a media ideal by drastically restricting their eating and compulsively exercising to build muscle mass.” This explains how desperate teenagers can get to change themselves to fit the idea of celebrity perfection.

Another way celebrities disapprovingly change the minds of teens and their bodies is by commenting on their own. An actress, Jennifer Lawrence, was caught guilty calling herself fat which could be hurtful to many teens her size. Abbey Stone from Hollywood News reports, “While it is beyond commendable that Lawrence points out how anorexic-seeming body types can be detrimental to young girls, her choice to call herself fat — even in a sarcastic manner — is a poor one.” Even by joking, celebs easily create more problems like body image that teens worry about in their daily lives.

Also, celebrities live a wild and free life in which they can make poor choices just to put themselves out there. Everyone needs a role model and celebrities fulfill that place but their wrong choices can be attractive to the young naïve minds of teens. An example is many celebs enjoy tattoo and piercing their bodies which becomes trendy to teenagers and they start wanting to do these things in order to look more like their role models. In the article Tattoos, Body Piercings, and Teens author Shelle Rosenfeld remarks, “Along with exploring reasons behind teens’ interest in the practices-celebrity influence, self-expression, rebellion–the book addresses risks, such as infections, tattoo removal costs, or how modifications may hamper employment.” Sometimes, by following the ways of their favourite celebrity, teens put themselves at risk for trouble. Another issue could be celebrities glamorizing the usage of drugs and alcohol. An article Refuse to Use Drugs and Alcohol from Teen Health and Wellness comments, “The mixed messages you receive from society and the media—certain rock stars singing the praises of various drugs and alcohol while other celebrities die from overdoses.” This shows that many famous people use drugs and alcohol to highlight their talents. One more example could be Wiz Khalifa’s songs like ‘French Inhale’ ‘Medicated’ or ‘Still Blazing’ that emphasizes the usage of marijuana and how good it feels. This targets the curiosity in teens and can lead to drug related issues.

Furthermore, celebrities are used frequently to model for items as a deceiving marketing technique. By using the faces of teens’ favourite celebs on different types of items, they are attracting and influencing their shopping choices. In the show Media and Money by CNBC, a marketing specialist Andrea Kraushaar claims, “Factors that generally impact tweens and teens, one of them is obviously the media, marketing and advertising have a strong impact.” The media can hype new products that cause teens to buy them and then realize it being a waste of money. Spending money wisely can become difficult with celebrities manipulating adolescents. Melinda Shaw from the same show realized, “People want idols, you want to look up to somebody and aspire to having more than what you have in your little life.” By this statement, a conclusion can be made that teens are never satisfied with what they have-they always want more. Trying to be like their favourite celebs, they buy more than they need by keeping up with brands and this can be very costly.

Lastly, teenagers have been exposed constantly to things that are wrong because they are always see celebrities behaving like that in the media. Reality shows are more popular and appealing to them as they begin to realize that to become famous they can follow bad habits such as being a teen mom from the shows ‘Teen Mom’ and ‘Sixteen and Pregnant’ or a party person from shows like ‘Jersey Shore’. Psychologist, Dr. Brown-Holloway on the Today Show admits, “Unfortunately when you have an individual constantly fighting, drunk and hooking up in a movie or on television, it does glamorize it to a certain degree.” That bad girl/boy famous life is just glamour and drama for the cameras for which many teens cease to understand and continue to let it take over their life.

In conclusion, the impact of celebrity behaviour on young teenagers can affect their lives in many negative ways. There is a pressure on body image which can ruin their sense of self-esteem. Also, many celebrity bad habits are learned and followed quickly. The marketing side of celebs provokes unnecessary buying based on brands and fashion. As well, TV reality shows give the impression that anyone can become famous for committing themselves into bad activities. These issues in the media will never rest, but teens should always be aware and differentiate between reality and camera life. By understanding the media and society around them, teens can avoid problems and drifting away from their lives.

The Celebrity Influence on Teens of Today. (2016, Apr 08). Retrieved from http://studymoose.com/the-celebrity-influence-on-teens-of-today-essay 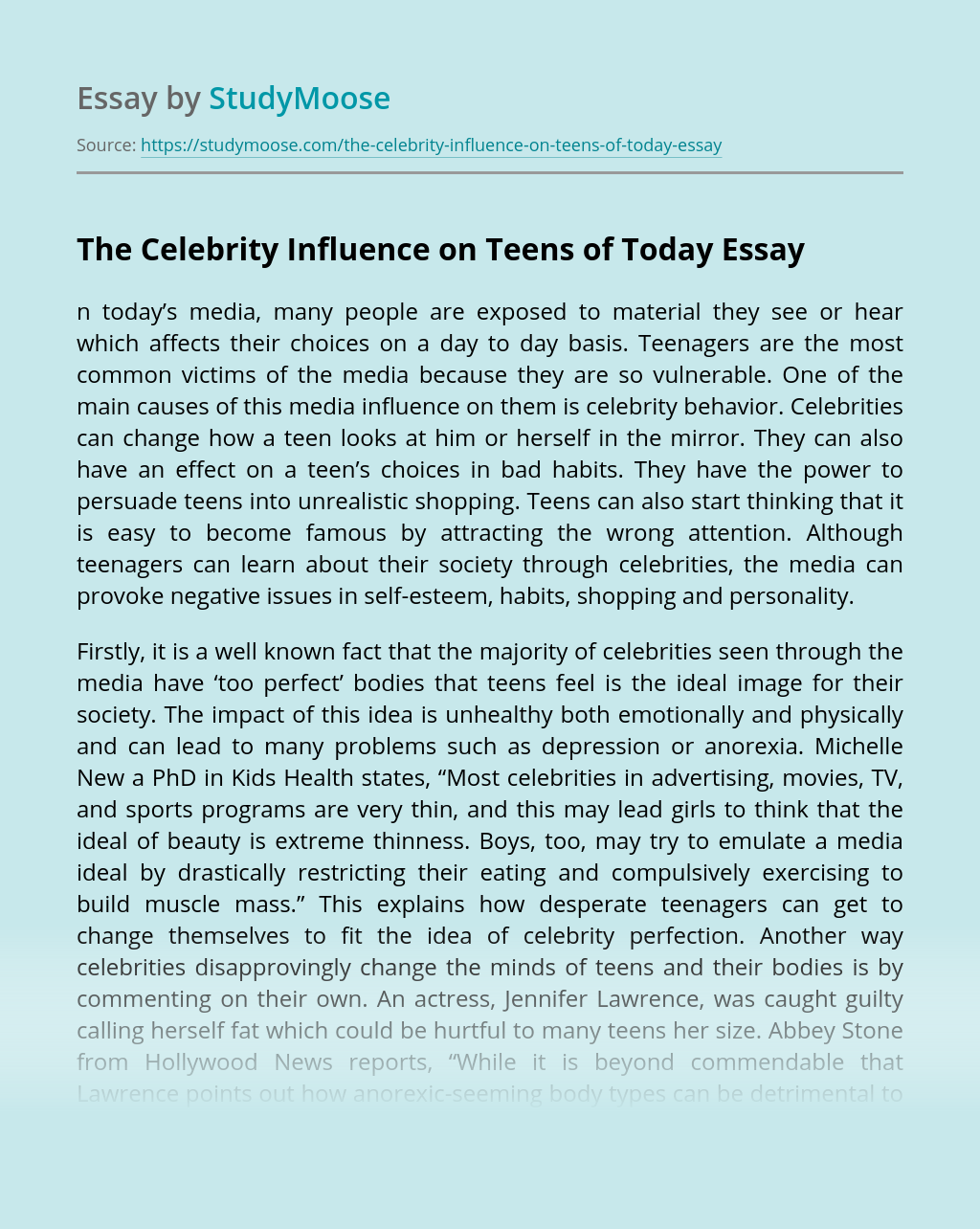