Graves’ disease, or toxic diffuse goiter, is an autoimmune disease where too much activity of the thyroid gland causes an overproduction of thyroid hormones such as T3 and T4. The disease is known for resulting in hyperthyroidism (an over active thyroid) which causes an enlarged thyroid and eye problems among other things. A large amount of different conditions and effectors can cause hyperthyroidism, but Graves’ disease has shown to be one of the two most common, along with Hashimoto’s disease.

Don't use plagiarized sources. Get your custom essay on
“ The Causes, Risks, Effects, Symptoms, and Treatment of Graves’ Disease, or Toxic Diffuse Goiter ”
Get custom paper
NEW! smart matching with writer

The disease can affect everyone, but it has been found that women at the age of forty to sixty are the most vulnerable according to a research done by the department of Nuclear Medicine at Warsaw Medical University in Poland. The same research also shows that; “The incidence of the disease is similar among White Race and Asians Race, but it is lower among blacks.” And ”In the United States Graves’ disease is the most common cause of hyperthyroidism and its occurrence is approx.

1.2%”(Prasek, 110) In the United states alone, 1.3 million people are living with this disease, and at the rate in which the frequency is increasing, 136 thousand people are diagnosed every year. Not only is the risk of getting the disease higher among females, the numbers are at least five times higher.

According to an essay written by Y. H. Dong (Department of Oncology, Hubei University of Medicine, China) and his colleague from the cardiology department at the same university, D. G. Fu; Graves’ disease and hyperthyroidism ”is much more common among women than in men, with a female:male ratio ranging from 5:1 to 10:1.

” (Y. H. Dong, 3612) Although the reasons for why the risk is higher in women is not completely clear they are certain that it has something to do with the X-chromosome inactivation that occur in females. To be able to understand what is not working correctly in a patient with Graves’ disease, one must first understand the basic functions of the thyroid gland and how they effect the rest of the body. The thyroid gland is an endocrine gland that is located in front of the trachea. It consists of two parts, known as lobes, which are connected by a string of thyroid tissue called the isthmus. The thyroid’s primary occupation is to produce thyroid hormones, which are carried out to the entire body through the blood stream.

The thyroid hormone, T3 and T4, mainly controls the metabolic regulation of the body. In Graves’ disease, and other hyperthyroidism diseases, the immune system works to create certain antibodies which causes the thyroid gland to grow beyond its normal limits and causes it to make more thyroid hormone (T3 and T4) than is needed. The specific antibodies responsible for this are called TSIS, or thyroid-stimulating immunoglobulins. The thyroid-stimulating immunoglobulin will attach to a thyroid cell receptor, which is the attachment site for TSH, or thyroid-stimulating hormone. (TSH is the hormone that is produced when the body is in need for the thyroid to produce more T3 and T4 hormones.) By attaching to the cell receptors for the thyroid-stimulating hormone it is causing uncontrolled and constant stimulation of the thyroid, which results in production of thyroid hormone far beyond its need. In a way this could be described as the TSIs tricking the thyroid into enlarging and overproducing thyroid hormone by pretending to be TSH, leading to hyperthyroidism and a series of serious conditions in the body’s hormone balance. As explained previously, Graves’ disease is a result of a dysfunction in the immune system and its antibodies.

However, a clear explanation for why this happens to a certain group of people has still not been found by researchers. One thing that is clear though is that the upbringing of the disease is controlled by both external and internal factors. External factors being environmental, such as smoking, stress, and pregnancy among others, and internal factors being genes. According to research done by the department of Nuclear Medicine at Warsaw Medical University in Poland, who are mentioned in a previous piece above; “Genetic and environmental factors (80%: 20%) are responsible for the rise of the disease.” (Prasek, 110) And according to Peter Lam and his article medically reviewed by David S. Cooper, MD; Professor of Medicine at The Johns Hopkins University School of Medicine; “Infection might play a role in the onset of Graves’ disease, but no studies have shown infection to directly cause Graves’ disease.” Common signs and symptoms of Graves’ disease and hyperthyroidism include among others: anxiety and irritability, heat sensitivity, weight loss, a goiter, bulging eyes, rapid or irregular heartbeat, tremors on hands or fingers, change in menstrual cycles for females and erectile dysfunction for males. The perfect treatment for Graves’ disease would be to inject a subject that could inhibit the production of thyroid hormones by blocking the thyroid-stimulating immunoglobulins or that would block the effect of the overproduced hormones excreted by the thyroid. Unfortunately, this is not possible in today’s medicine.

The second type of treatment on the list is anti-thyroid medications. Anti-thyroid medications are a medication whose single purpose is to interfere with the thyroid gland’s way of producing hormones. The most popular group of anti-thyroid medication in people with Graves’ disease are thionamides, who’s “main effect is to inhibit the synthesis of thyroid hormone by blocking the action of thyroid peroxidase as a consequence of incorporation of iodine to thyroglobulin, which is an important step in the synthesis of triiodothyronine (T3) and thyroxine (T4).” (Prasek, 112) Although anti-thyroid drugs are a good fit for a large number of patients, the treatment does not cure Graves’ hyperthyroidism; however, it can reduce the symptoms tremendously with continuous use of the drug. As with any drug there are side effects to look out for. These might include joint pain, liver failure (in extreme cases, rash, decrease in disease fighting white blood cells, among others. Most of the drugs that are used in this type of treatment are just like radioiodine therapy, not suitable for women who are pregnant or who are breast feeding due to the risk of disrupting the fetus or the infant’s hormone production.

The only drug that has been approved for women to use during their pregnancy is propylthiouracil, which is a milder anti-thyroid drug. The third treatment mentioned above is called bet-blockers. Beta-blockers do not inhibit thyroid hormone production, instead, they block the effects that hormones have on the body. Beta-blockers are not as common as other treatments mentioned on this list, but it is an important alternative treatment that may provide fairly rapid relief. However, the side effects of this type of medications are many and may involve irregular heartbeats, sweating, diarrhea, muscle weakness, heat intolerance, tremors and anxiety.

Another treatment available today is a thyroidectomy, which is a surgery that removes parts of or the entire thyroid gland. This treatment is not as common as the radioiodine therapy or anti thyroid medications due to the side effects that might occur during surgery. The biggest risk of this surgery is potential damage to the patient’s vocal cords, but with a surgeon experienced in thyroid glands complications are rare. This type of treatment is mostly considered in cases where the patient is not responding to initial treatment, and/or has a large goiter. Even though Graves’ disease is a serious and harmful condition, with today’s knowledge about hormones in the body there is an opportunity for patients to live a fairly normal life. However, leaving the disease untreated will drastically make it worse and can become life threatening in the long term. ”Treatment of Graves’ disease is of great importance because if left untreated it can lead to long-term harmful effects on the heart, bone and mental well-being of patients.” (Prasek, 112) 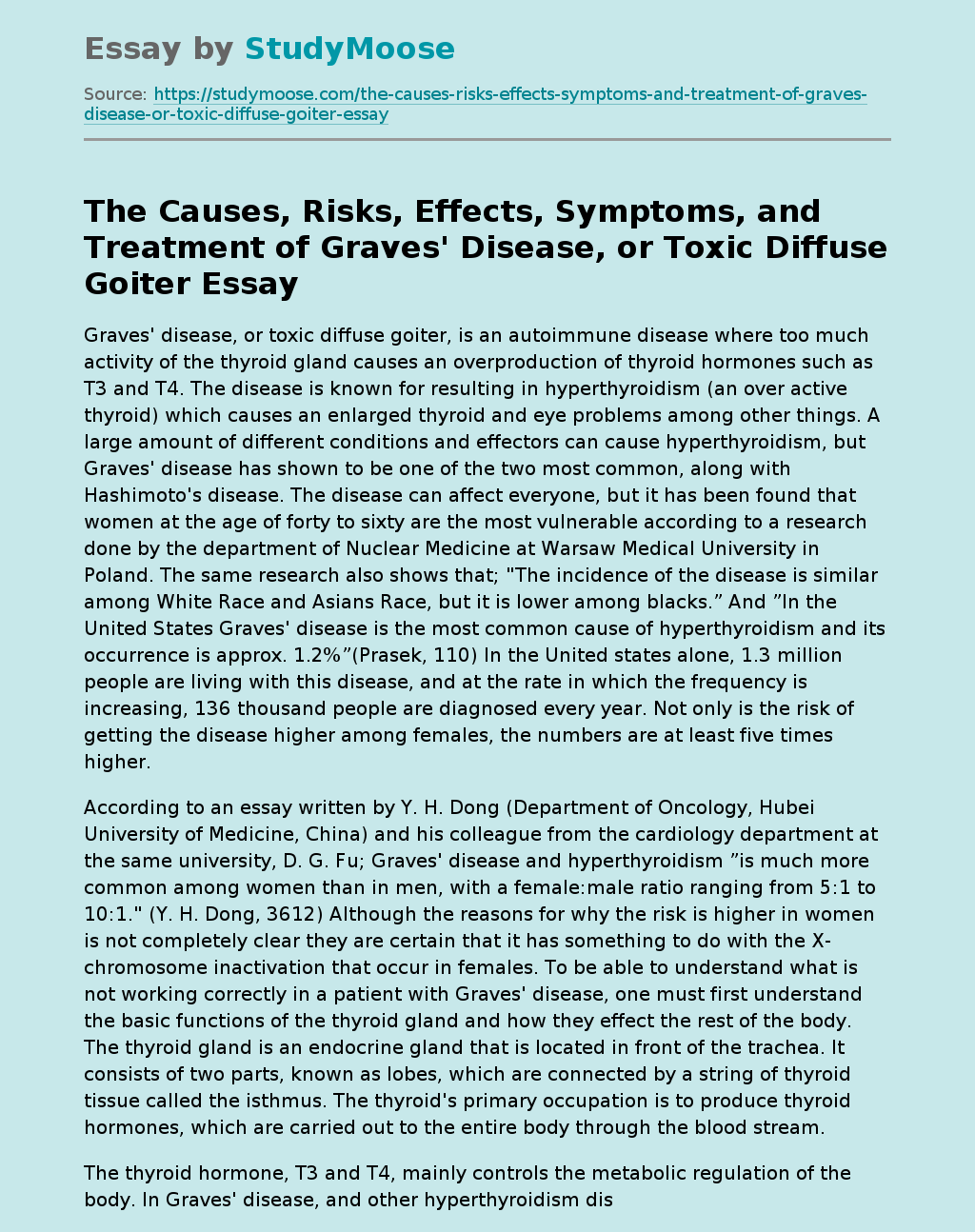