The causes and consequences of the Great Awakening

Glorious Revolution of 1688: fighting between religious and political groups came to a halt with the Church of England was made the reigning church of the country. oPOV England: From a political perspective, this led to stability since everyone now practiced the same religion.

Don't use plagiarized sources. Get your custom essay on
“ The causes and consequences of the Great Awakening ”
Get custom paper
NEW! smart matching with writer

oPOV people: Other religions, such as Catholicism, Judaism, and Puritanism, were suppressed and people were complacent and spiritually “dry”. Religion became something of a pastime in which people would “go through the motions” during religious services without deeply-felt convictions of the heart and soul.

Because of the dryness, Certain Christians began to disassociate themselves with the established approach to worship and instead adopted an approach which was characterized by great fervor and emotion in prayer.

John Wesley is considered to be the father of Methodism.

His brother, Charles, became one of the most prolific English-speaking poets, composing more than 6,500 hymns. othe brothers were founding members of a small Oxford University reform group that eventually spawned the second-largest Protestant denomination in America.

Influences the south (slaveholders participate; try to prevent slaves from attending) o“Let us, therefore, not be weary of well-doing; for we shall reap an eternal harvest of comfort, if we faint not.

Through the Awakening, the Colonists realized that religious power resided in their own hands, rather than in the hands of the Church of England, or any other religious authority. After a generation or two passed with this kind of mindset, the Colonists came to realize that political power did not reside in the hands of the English monarch, but in their own will for self-governance. Thus, the Great Awakening brought about a climate which made the American Revolution possible.

The terms New Lights and Old Lights refer to factions that appeared within New England Congregationalism in the mid-18th century. The New Light/Old Light dispute brought on the final dissolution of the Puritan social and theological system that had shaped New England religious culture for more than a century. While each side claimed to be the genuine heir of Puritanism, each in its own way was responsible for the reshaping of American Protestant thought. New light: supported the Great Awakening and believed the revivals of the awakening to be genuine works of God that strengthened American Christianity.

The causes and consequences of the Great Awakening. (2016, Apr 30). Retrieved from http://studymoose.com/the-causes-and-consequences-of-the-great-awakening-essay 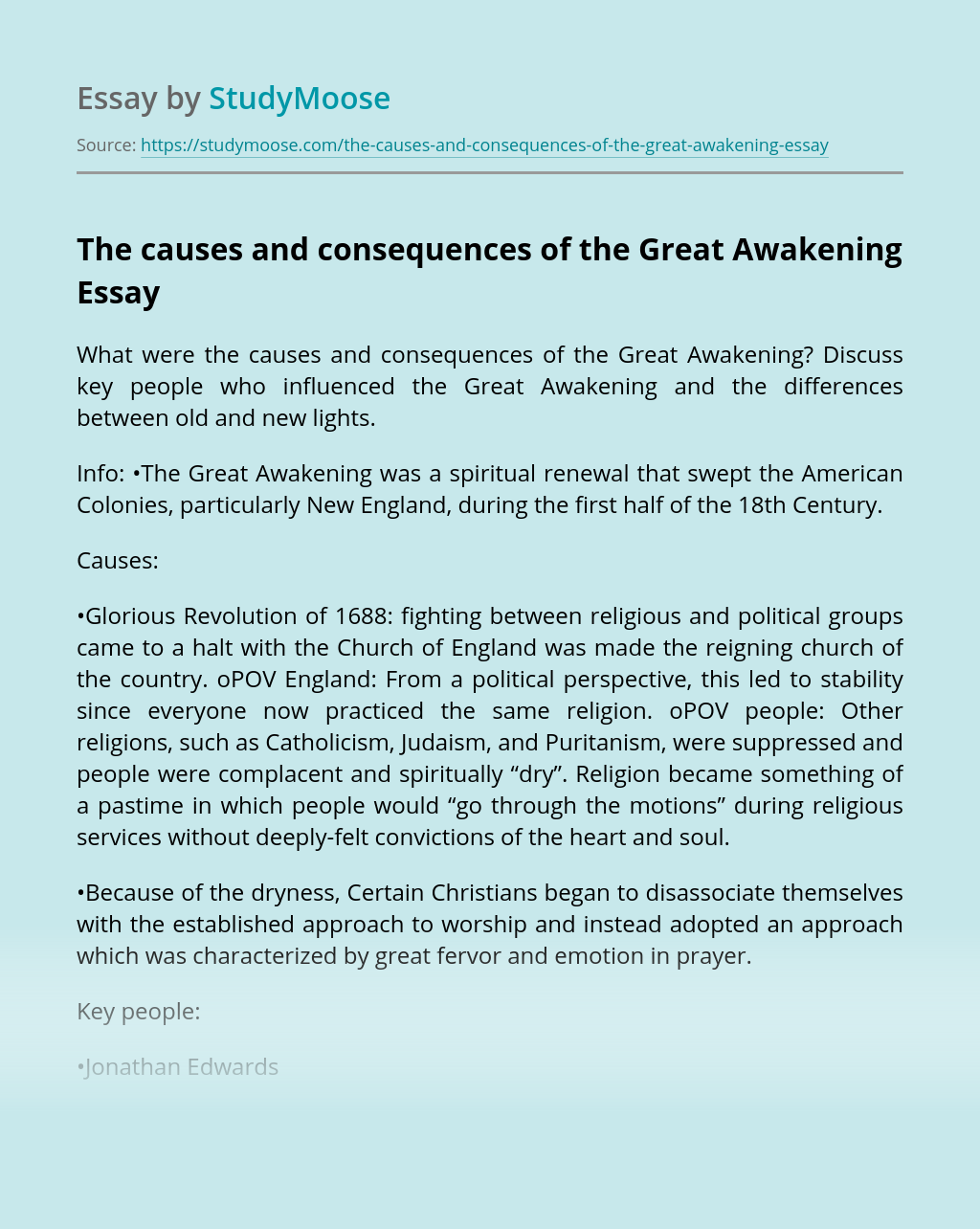