The Catcher in the Rye and Holden Statement

1.How is it possible that despite Holden’s statement in the first line of Chapter 3, “I’m the most terrific liar you ever saw in your life,” the reader believes nearly every thing he says? He said that it is because he believes what he said, he wasn’t tries to praise someone or something, it is the things what he believes.

2. Holden’s understandings are false much of the time, but the basic ideas are correct .find an example of this in chapter 3.

Don't use plagiarized sources. Get your custom essay on
“ The Catcher in the Rye and Holden Statement ”
Get custom paper
NEW! smart matching with writer

Holden opens Chapter Three with this declaration. He gives a short discourse on lying, and then we learn that Holden lives in a dormitory donated by an alumnus named Ossenburger, who made all his money with cheap funeral parlors. Ossenberger is a graduate of the school, who has been a contributor to the school. He is honored by having a dorm named for him, the dorm that Holden lives in. 3. Why does Holden think that Mr. Ossenburger is a phony?

Someone who shows up to football games once and year to make it look as though he actually still cares about the school.

He tells about a speech Ossenburger made to all the Pencey Prep. students in which he tells the boys to speak to God as though he’s one’s best friend. Holden can’t comprehend this because its meaning is clouded in his mind: he sees Ossenburger as just bragging that he talks to God this way, which makes Holden more firmly believe that Ossenburger is a phony.

Ossenburger made his money from cheap funeral parlors; Holden says he gives boring speeches 4. what kind of person is Ackley, and how does Holden feel about him? Holden can’t stand Ackley. He is not hygeinic and is a large nuissance to Holden. Somewhere in the back of Holden’s mind, he doesn’t ‘hate’ Ackley because otherwise he wouldn’t talk to him, but he prefers not to call him a friend. I think Ackley sees Holden as a form of amusement. He sees him as a friend – he’s already used to people being mean to him and Holden is one of the few that actually talks to him. Holden doesn’t treat Ackley with the highest respect but still gives Ackley his company (even if Ackley forces him).

5. Why does Ackley hate stradlater? How does Holden feel about Stradlater? Stradlater is a self-absorbed character. He thinks of few but himself and is often only concerned about his appearance (he’s always in the bathroom fixing his hair, etc!). Holden does not like Stradlater especially because Stradlater is going on a date with Holden’s crush Jane Gallagher and Stradlater hardly knows her name. Holden absolutely is frustrated and upset by this. I wouldn’t like Stradlater but this is an opinion again, sooo your turn.

1 Do the characters Mr. Spencer, Ackley, and Stradlater strike you as believable people? Do Holden’s observations of them seem accurate or inaccurate? What method does Salinger use for Holden’s description of people? Holden is an untrustworthy narrator and although he may get the right idea or generalization about a character, he doesn’t tell the whole truth about him/her or his/her situation. The descriptions of Mr. Spencer, Ackley and Stadlater are generally accurate, but Holden probably leaves out a lot of details about them.

2. Holden is sometimes accused of being too critical of people. Can you point to times when he is positive? Back to the girl-talk. Stradlater says his date’s name is Jean Gallagher, and Holden “nearly [drops] dead.” He says her name is Jane, not Jean, and he practically grew up next door to her. Stradlater obviously knows nothing about this girl, but Holden goes on about how she used to dance ballet when she was little, and how, when they played checkers, she would never move her kings from the back row because “she liked the way they looked.” 3. Find two examples of Caulfield repeating himself excessively. What might this repetition contribute to the book? He says that he hates people who repeat themselves. he then repeats himself. Often his repetitions are the opposite of what he just said. He could be a bit phony. He totally hates phonies. Yet he is one. This all leads up to his being in a nut home in the end.

The Catcher in the Rye and Holden Statement. (2017, Jan 08). Retrieved from http://studymoose.com/the-catcher-in-the-rye-and-holden-statement-essay 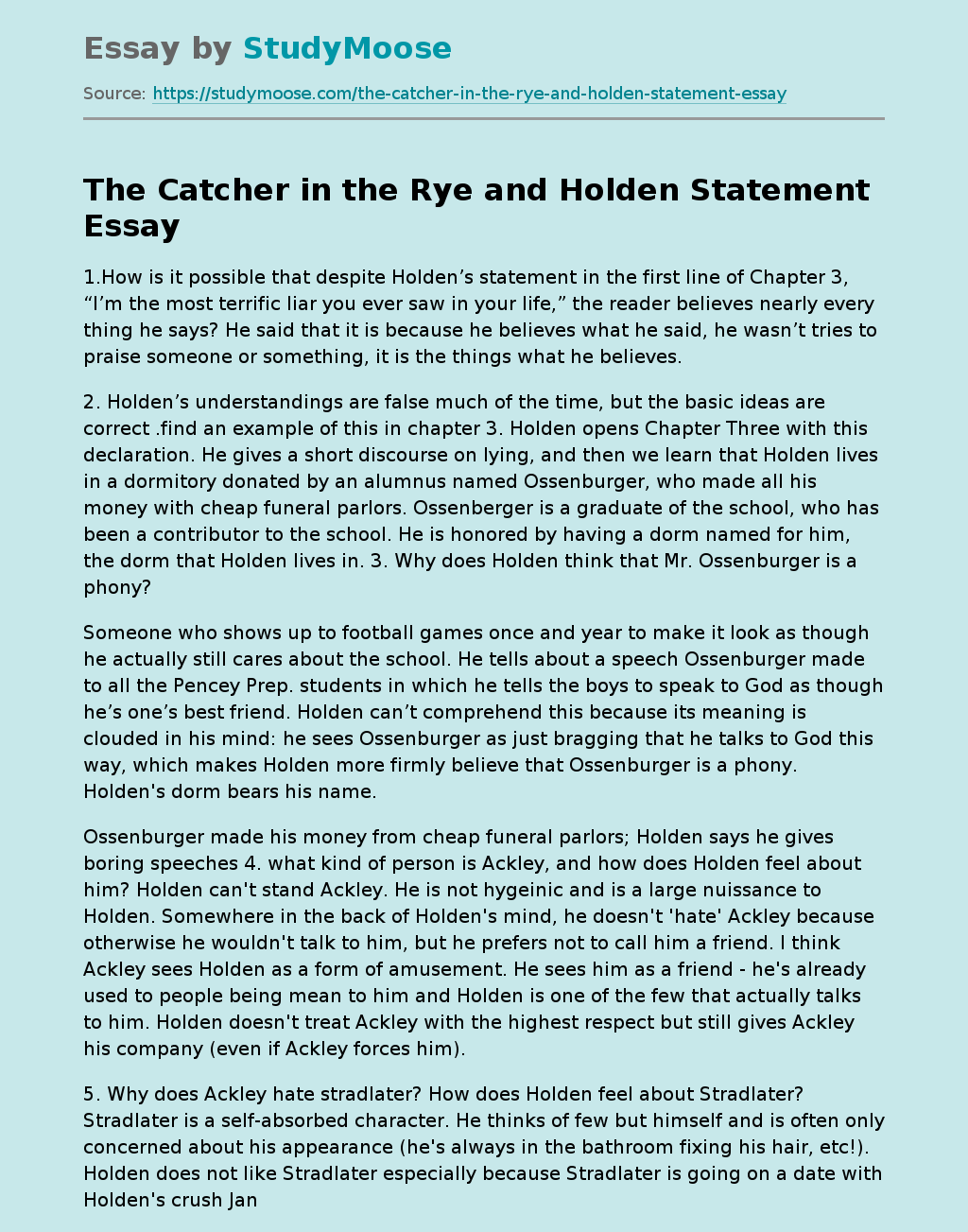