The Castle by Rob Sitch and the song ‘From Little Things Big Things Grow’ by Kev Carmody and Paul Kelly both portray the means of being a part of the global village as they show the readers what it means to be a part of something special. This may come in the form of saving your house or moreover, your home as ‘a home is a man’s castle’ or a historical song showing how we as humans are all interconnected.

Don't use plagiarized sources. Get your custom essay on
“ The Castle & From Little Things Big Things Grow ”
Get custom paper
NEW! smart matching with writer

The Castle, directed by Rob Sitch in 1997, is a gentle satire of innocence struggling to survive in a globalised world. While we are asked to admire the Kerrigan’s for their simplicity and innocence, we are also reminded that they need to be less naïve and learn to deal with the demands and interests of powerful global corporations. Fortunately for the Kerrigan’s, powerful legal help arrives in the form of Lawrence Hammill, who offers to help them because he is attracted by their innocence and knows they cannot possibly win without him.

In this ‘Daryl versus Goliath’ struggle, the global force is Air link, hoping to expand its runways to cater for more global travel and increase its global market share. It is not interested in community, but determined to win at minimal cost to itself, with whatever bullying and intimidation is deemed necessary.

The Kerrigan’s’ local community supports their stance, as shown by the police officer’s blind eye to the theft of the gates, but believe that no-one can really achieve anything in the face of powerful multi-national interests.

In this case the term ‘global village’ can be read as an oxymoron, a contradiction in terms, where the smallness of the village is no match for the might of the global force. Sharing a fence with the Tullamarine runway, the Kerrigans are reminded constantly of their place in the global village. While it is clear that the airport is a ‘reward’ for those who use it and the corporation that profits from it, and while film viewers would see living right next to an airport as an ‘obstacle’, things are less clear-cut for the Kerrigans. For Daryl, the planes symbolise optimism and progress, even if only one member of his family has ever taken up the opportunity to travel and see some of the world. There is also ‘reward’ in the fact that they have been able to create their spacious dream home precisely because the land at Highview Crescent is so cheap. Even though they have the world literally across the fence, they are not interested. They have everything they need in their own home, street and local community.

The insistence of Darryl on his rights and the eventual defeat of the Barlow Group shows how the individual can succeed over the huge corporations. The Barlow Group are depicted as a corporation that, through the economy, has covertly shifted power away from the governments and the individuals, threatening the democratic system. This heartlessness is conveyed in a mid-shot of the councilwoman, leant back with an impassive expression and her formal costuming implies distance. Laurie’s arguments in the High Court and the emphasis placed on the phrase within the constitution, “on just terms” are another instance of how the individual can fight the establishment given the right circumstances. Also, there is a negative depiction of local government colluding with corporations. “one phrase within the constitution…on just terms”. A pause in dialogue emphasises this phrase, depicting Laurie as the wise, experienced, figure of moral conviction and justice. Juxtaposition of simplicity and naivety of DeNuto to Laurie’s knowledge and sophistication in speech emphasises this.

The Global monster is represented through largeness of buildings and the lack of understanding from Darryl’s point of view. Sitch suggests in the global world, governments and laws are increasingly vulnerable to the covert power shifting through the economy and ideals become threatened, thus threatening local communities and individuals. The character Laurie and his arguments reiterate the ideal values, reminding the responder that governments and laws should provide for social stability and thus individual justice, rather than promoting global economic policies. On the other hand, the value of having equality is shown in Paul Kelly’s song, he uses colloquial lyrics to construct a theme of the struggle for indigenous people fighting for their land rights. The idiom ‘make a stand’ explains the indigenous protest against the white landowners, by the repetition of ‘from little things big things grow’, it implies the indigenous people are standing up in what they believe in.

Despite bribes and threats the Gurindji stood their ground. The longer they waited, the stronger they became. What many outsiders had thought unthinkable at first came to pass almost nine years later, when the Labor government of the day agreed to give them back their land. The Prime Minister himself, Gough Whitlam, came out to Gurindji country to officiate at the handover ceremony and said, ‘I want this to acknowledge that we Australians have still much to do to redress the injustice and oppression that has for so long been the lot of Black Australians. Vincent Lingiari, I solemnly hand to you these deeds as proof, in Australian law, that these lands belong to the Gurindji people and I put into your hands part of the earth itself as a sign that this land will be the possession of you and your children forever

The Castle & From Little Things Big Things Grow. (2016, May 07). Retrieved from https://studymoose.com/the-castle-from-little-things-big-things-grow-essay 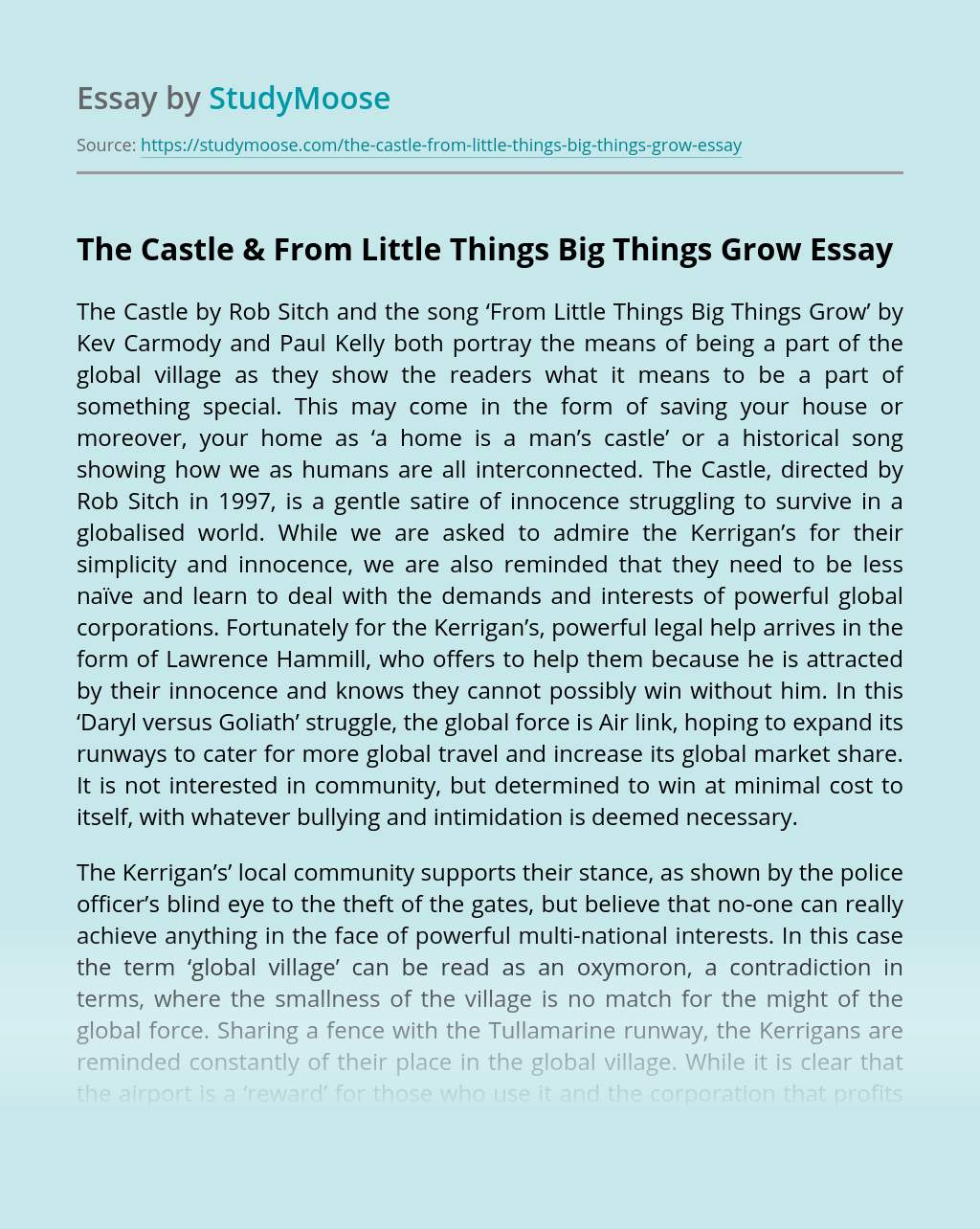