The global village is vastly evident throughout all of society, moreso than ever before. As a result of the formation of this global village, there has been many consequences for society. With the rising coexistence of local and global communities, local society is adapting to suit the needs of the global village. Hence, there is a battle between the individual and the power of globalisation, as the world is becoming more connected. Rob Sitch’s 1997 film, ‘The Castle’, portrays the effects of the global village through the juxtaposition of the Kerrigan family to the Barlow group, a transnational corporation.

Don't use plagiarized sources. Get your custom essay on
“ The Castle Essay – Global Village ”
Get custom paper
NEW! smart matching with writer

The global village concept is also portrayed in CBC TV’s 1960 interview with Marshall McLuhan, ‘The World is a Global Village’. Throughout these two texts, it is clearly evident that the global village has become an intrinsic part of society.

As the world grows closer together, a major contrast has formed between the local and the global aspects of society. This is expressed in the establishing scene of Sitch’s ‘The Castle’.

The camera is fixed on the Kerrigan’s house, depicting a very stereotypical Australian dwelling as a symbol for local aspect of society. The camera then pans left to the expansive airport symbolising the globalisation that has entered the world. The juxtaposition of the two settings illustrate how close the two aspects of society have become, yet there is still a stark contrast between them. Darryl also withdraws himself from the global society when he poses Con with the statement ‘Bet they don’t have places like this in Thailand’, referring to Bonnie Doon.

The use of dialogue summarises Darryl’s narrow world view and shows his disappreciation for the world around him. Marshall McLuhan’s interview also portrays the clash between the local and global characteristics. This is seen through the juxtaposing settings of the electronics store and the book shop. The electronics symbolise the global influence, whilst the books reflect the original local aspect of society. Although the contrasting aspects are a consequence of living in the global village, they are still able to coexist.

As technologies advance, another consequence of the global village is the adaptations society has made to cater for globalization. This is evident in ‘The Castle’ through the motif of the ‘Trading Post’. Although the Kerrigans are a very localised family, they take great interest in the trading post, symbolising their connection to the rest of society. Darryl later withdraws from partaking in the trading post discussion when he is let down by how he was treated by the global village. Another area where adaptations are seen, is through the introduction of Con to the family. Con symbolises the worldly connection through both his Greek heritage, and his passion for kickboxing. This is contrasting to the very Australian style of the Kerrigan family and highlights their acceptance of cultural diversity. This consequence is also explored through a symbolic gesture by the second speaker in CBC’s documentary. As the speaker walks out, he tosses the book in his hand onto a pile before departing. This action symbolises the assimilation that is made by accepting the changes the global village is bringing and adapting to what society is becoming. This assimilation is a definite consequence of living in the global village, and both enhance and hinder an individual’s thoughts.

An individuals thoughts can be suppressed due to the sheer power that os world over the individual. ‘The Castle’ explores this compromise through the diagetic sounds of the planes flying over the Kerrigan household. Throughout the film, the motif of planes symbolise the authority of the global village. The overpowering noise of the plane engines drown out the Kerrigan’s conversations, highlighting the suppression felt by the Kerrigans. The subduing of the Kerrigans is compounded when Darryl appears at the local court. The magistrate is constantly viewed from a low angle to magnify the power that the authority holds over the individual. Contrasting to this, Darryl is viewed from a high angle to diminish his position and belittle his presence. This authoritarian view of the global village is also evident through the analogy of ‘tribal men’ in Malcolm McLuhan’s interview. McLuhan uses this analogy to explore that ‘we are no longer so concerned with self definition’ and that ‘involuntarily we are getting rid of the individual’. This suppression the global village has brought has had a negative consequence on the lives of many individuals.

On the other hand, the global village has allowed society to be more connected than ever before. The motif of power lines is shown throughout the film to symbolise the Kerrigan’s connection with society. Darryl admires the power lines, revealing his acceptance of the adaptations to society to an extent. The Kerrigan’s large antenna also highlights their subconscious connection to the global village. It is also seen when and Con and Tracy return from Thailand. Due to globalisation, geographical boundaries are becoming irrelevant and many cultures can be readily experienced. The initial speaker in the Marshall McLuhan documentary also explores the connectivity of the world when he states, ‘you push a button, and the world is yours’. This quote highlights the enormous effect the global village has had on society and how easily accessible information has become, enabling us to ‘learn everywhere’. This connectivity has been a positive consequence on society as we have a much broader view and are more informed than ever before.

The world is rapidly changing due to the consequences of the global village. The local and global elements of society have been challenged, the involuntary changes to society are accepted, the power authorised by globalisation over individuals has been forsaken and the way society is more connected has been embraced. Through both ‘The Castle‘ and the CBC Marshall McLuhan documentary, it is clearly evident that the global village has impacted both the individual as well as the local community. Although the global village produces many consequences, society will never stop striving for a closer world. 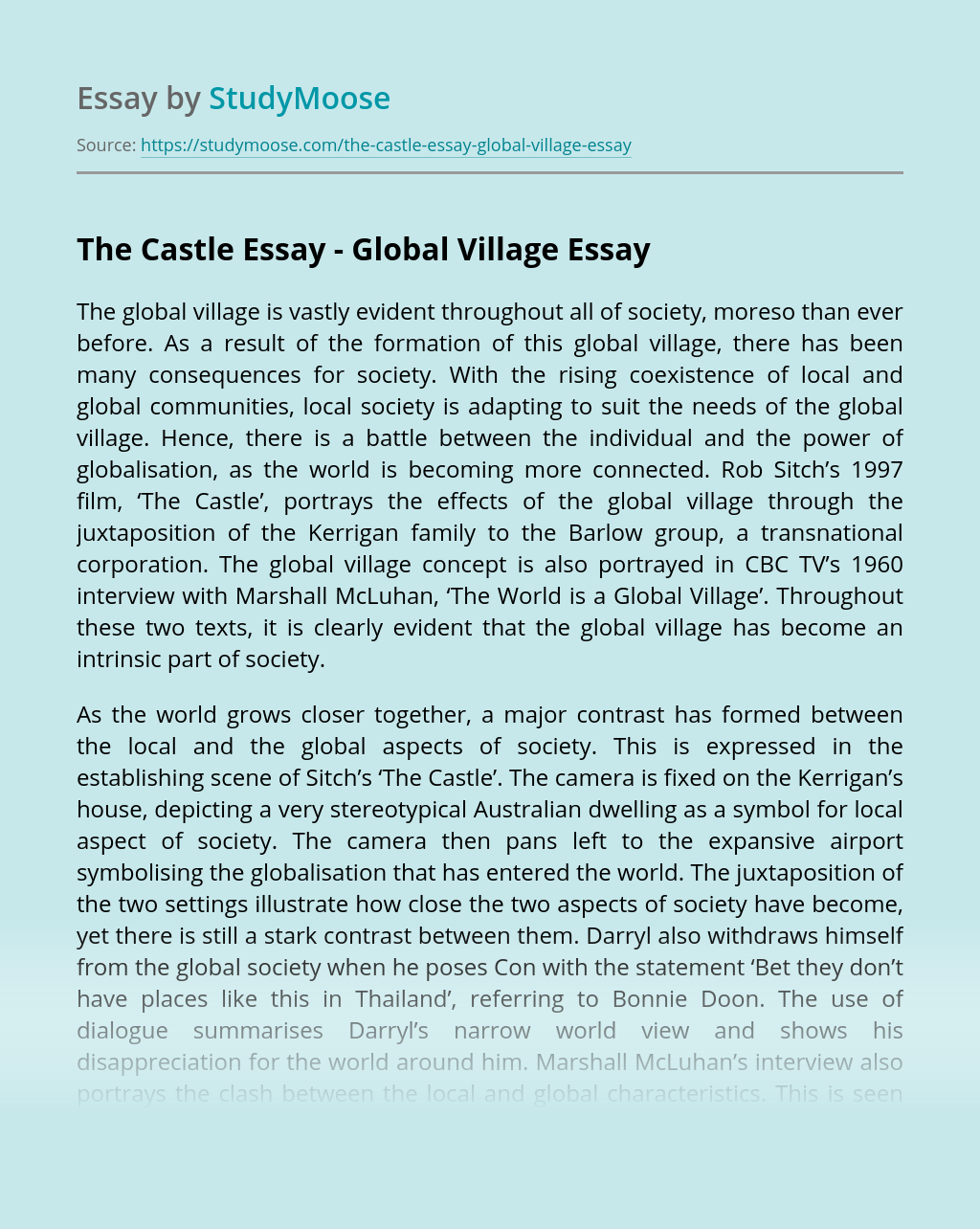