The Castaway’ by Rabindranath Tagore and ‘Touch-me-not by Ismat Chughtai: A Comparative Analysis

“Some poisons have no antidote, but are slow, silent, torturous ends that curl up the broken body swept into a cold, dark corner. There she is left to drown in her tears – a dying heart. Abandoned.”

Rabindranath Tagore, in his short story ‘The Castaway’, draws out the underlying theme of abandonment. The boy Nilkanta’s life is chronicled by an overshadowing sense of desertion. Similarly Ismat Chughtai’s ‘Touch-me not’, also follows the helplessness of Bhabijan as she struggles to maintain her societal position amidst her impending abandonment.

Don't use plagiarized sources. Get your custom essay on
“ The Castaway’ by Rabindranath Tagore and ‘Touch-me-not by Ismat Chughtai: A Comparative Analysis ”
Get custom paper
NEW! smart matching with writer

Although entirely different in narration style, both the stories follow a similar unravelling of emotions. In the stories, the central characters, are given a brief glimpse of a life different from their own, a false sense of hope. This leads them to aspire for an alternate reality, only to see it being snatched away from them. The plight of the central characters at the beginning of the story makes us aware of their predicament.

The boy Nilkanta is presumably an orphan, with no worldly connections whatsoever.

Thus we can infer that he has faced desertion and loss early on in life. He is inexperienced when it comes to forming relationships with others. Due to the absence of familial, or any form of restraint in his life to this point, he has no notion of obedience to a person in authority. He does what he feels like and then bears the consequences. This becomes clear in the narrator’s reference to the ‘eatings and beatings’ of life and the fact that Nilkanta does not argue or defend himself, rather he accepts the punishment and continues to do as he pleases.

Thus his abandonment as a child manifests itself in his non- deferential attitude and lack of respect. Bhabijan on the other hand, in ‘Touch-me-not’ is revealed to be a woman almost on the verge of abandonment. Despite the constant care and supervision of Bi Mughlani, she has suffered two miscarriages and her husband has all but lost hope of an heir to continue his lineage. Her failure to provide her husband with an heir will result in him deserting her for another wife; one who will. It is at this critical moment in both the stories when a ‘Messiah’ of sorts enters. Nilkanta is cared for by Kiran who he views as a mother figure. For the first time in his life, Nilkanta is the recipient of attention and compassion, and he wholeheartedly reciprocates those feelings. The relationship between Nilkanta and Kiran begins as a purely platonic one.

He is an entertainer and a sort of novelty to Kiran who was already bored of the village life and yearned for some form of entertainment. However, in his new home, his naiveté fades away and he finds himself attracted to her. Thus his perception of her takes on more sexual undertones, while she continues to provide him undivided care and attention In ‘Touch-me-not’ Bhabijan finds herself pregnant the third time. However, unlike the first two times when she miscarried, this time, the pregnancy advances despite her constant sickness. Whether it is the fortified strength of the witchcraft performed on her along with the inspection of the Delhi doctors, who descend on their home, the hope of a child swells in Bhabijan and in Bi Mughlani as well. For the first time, Bhabijan begins to anticipate the arrival of the baby. The child will be the answer to all her prayers and will shield her from the imminent desertion of her husband, should she fail to produce a child. This leads us to the depiction of traditional society and its attitude towards women. In Tagore’s short story, reference is made to the patriarchal society of that time. When Kiran, who is a favourite with all her family and much loved by her husband, is taken ill, Sharat immediately proposes a change of air in order to recuperate.

He is incessantly chided by the villagers for this decision and for making such a fuss about a ‘mere woman’. This is an attestation to society and its traditional mindset. Similarly, the traditional, patriarchal nature of society manifests itself in Chughtai’s story as well. Giving birth is described to be as easy for a woman as it is for a man to get off a train. Thus the narrator echoes society’s idea that the production of children is the sole concern of a woman. She is even described as having ‘one conjugal duty’ in which she cannot fail. If Bhabijan does not give birth to a child, then she will be replaced by another woman whose duty again will be to produce a child.

Traditional Indian society is almost painted in a Marxist light where women are viewed as factors of production which can easily be replaced if they do not function satisfactorily. Once again the stories converge on common ground. The entry of an external element, that directly leads to the dissolution of any former hopes or aspirations of the central characters. In ‘The Castaway’, Kiran’s brother in law, Satish arrives and subsequently, diverts all her attention away from Nilkanta. The boy once again begins to feel devoid of all attention. He becomes aware of his diminishing relevance in Kiran’s life and is plagued by the fear of abandonment once more. Thus, Satish’s arrival brings Nilkanta face to face with the stark reality of his life to come. He realizes that if he cannot salvage Kiran’s interest in him, she will desert him and move on. This realization is transformed into a blind hatred towards Satish, and is further manifested in the unintended, unethical act of stealing his possession. Likewise, in ‘Touch-me-not’, Bhabijan is so unnerved by the peasant woman’s delivery, that she suffered another miscarriage. The peasant woman seems to mirror Bhabijan’s immediate future; a future that Bhabijan never aspired for in the first place. As a married woman, only a child would give her relevance in society, and thus her need for the child was greater than her want for it. In order to retain her social standing, she was desperate for the baby.

However, reality comes crashing down on her, when she witnesses the peasant woman’s delivery. The characterization of Kiran in ‘The Castaway’ and Bi Mughlani in ‘Touch-me-not’, both secondary female characters, is interestingly portrayed. Both women have a certain objective and throughout the story use their instrumentality to achieve the said design. Kiran’s character is seemingly immature and naive. She is constantly seeking amusement and perhaps unintentionally demands it from those around her- first from Nilkanta and later on from Satish. She is depicted in an almost childlike manner in her arguments and persuasions. Yet she is also kind and understanding and is genuinely concerned about Nilkanta and his welfare. She too suffers a loss in the end; a loss of trust. On the other hand Bi Mughlani is only interested in the birth of Bhabijan’s child. She does everything possible to make sure the delivery is normal and even goes to the extent of indulging in witchcraft to assure herself of the unborn child’s safety. She too is concerned about Bhabijan and her health. However, it is clear that the birth of the child is her main motivation and she constantly strives towards this objective. The loss of the unborn baby is a personal loss to Bi Mughlani as well. Thus fate does play with us

Shows the shore and then capsizes the boat.
This quote at the end of ‘Touch-me-not’ perfectly captures the essence of both short stories. After a profound brush with reality and their yearning for association once again ignited, Nilkanta and Bhabijan are both left forsaken, desolate and abandoned.

The Castaway’ by Rabindranath Tagore and ‘Touch-me-not by Ismat Chughtai: A Comparative Analysis. (2016, Apr 20). Retrieved from http://studymoose.com/the-castaway-by-rabindranath-tagore-and-touch-me-not-by-ismat-chughtai-a-comparative-analysis-essay 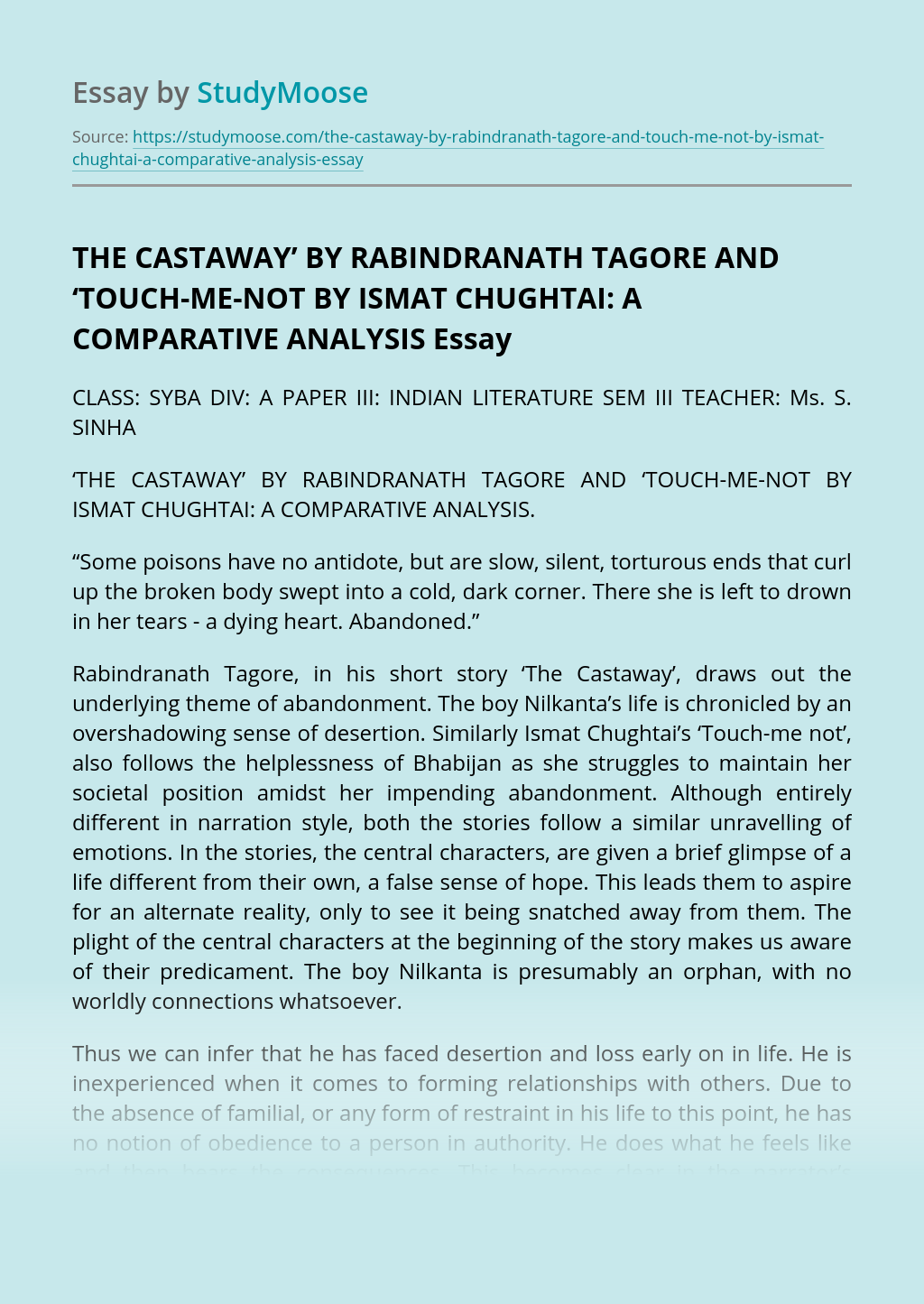