The Cask of Amontillado vs. the Tell-Tale Heart

The Tell-Tale Heart and The Cask Of Amontillado, both written by Edgar Allan Poe in the 18th century, are two tales that shows how Poe focused on the dark and mysterious. Both stories being written by the same author has a few similarities however there are also some differences. The narrator of The Tell-Tale Heart begins by persuading the reader that he is not mad, simply because he feels that his senses have been sharpened and he was ever so wise enough to stalk his victim throughout the night at midnight without being suspected of it.

Don't use plagiarized sources. Get your custom essay on
“ The Cask of Amontillado vs. the Tell-Tale Heart ”
Get custom paper
NEW! smart matching with writer

He also stated more than once that he was nervous.

Mean while, Montressor in The Cask Of Amontillado seemed to be very confident . He is some what arrogant that he would be able to follow through with his plans of revenge on Fortunato. As the story continues in The Tell-Tale Heart, while trying to claim his sanity he explained just how much he was disturbed by the eye of an old man.

Proficient in: The Cask Of Amontillado

With that being said the narrator had no rational reason to commit such a crime. In Contrast, Montressor thinks that Fortunato is very deserving of his death due to the “thousand injuries” that Fortunato has committed. However, this story doesn’t reveal exactly what wrong was done to Montressor.

Similarly, both stories involve elements of death where the narrators harm another human being.

Montressor and the Narrator who seems to be some kind of caregiver of the old man in The Tell-Tale Heart are both considered the antagonists in the stories and were both conveyed through the murderer’s perspective. The use of a deranged first-person narrator amplifies the dramatic impact of the tale and this takes place through the story’s visual, aural, and poetical dimensions. Because he sees the crime carried out from the narrator’s perspective, the reader’s imagination is concentrated upon the same visual elements with which the narrator is obsessed. ” (2010 eNotes. com, p. 12) Furthermore, being that both characters are completely obsessed with their horrifying plans it leaves me to believe that Montressors’ sanity is up for question also.

He felt that the insult caused by Fortunato was great enough that death was his only way of avenging himself. In addition, Poe conveys both stories through the murderer’s perspective. “Something that I have picked up on, early in the story when Montressor suggests that he shall fetch Luchesi, and Fortunato says over, and over again in several different places, “Luchesi, he cannot distinguish Sherry from Amontillado” I find this ironic because Fortunato cannot distinguish friend from foe – so what makes him so much better a good judge? (Amelia Tibbett,2008,paragraph 4).

This also shows how questionable his knowledge of wine actually is because Amontillado is indeed a Sherry. Lastly, As sane as the narrator claimed to be he began to hear the heartbeat of the old man beneath the floorboards where his body laid. The tale ended with the narrator confessing to the crime to three policemen who he thought also heard the loud beating of the old man’s heart. On the contrary, Montressor mentions that 50 years has passed and no one has discovered his terrible deed.

He doesn’t even seem the least bit bothered by it and even mentions at the end of the story, may Fortunato rests in peace. Both The Tell-Tale Heart and The Cask of Amontillado are two stories where Edgar Allan Poe shows distinctive characteristics in the narrators. By reading these two stories you can almost tell that they are by the same author even though the plot and characters are different. Yet, the writing still is very much the same.

The Cask of Amontillado vs. the Tell-Tale Heart. (2016, Dec 29). Retrieved from https://studymoose.com/the-cask-of-amontillado-vs-the-tell-tale-heart-essay 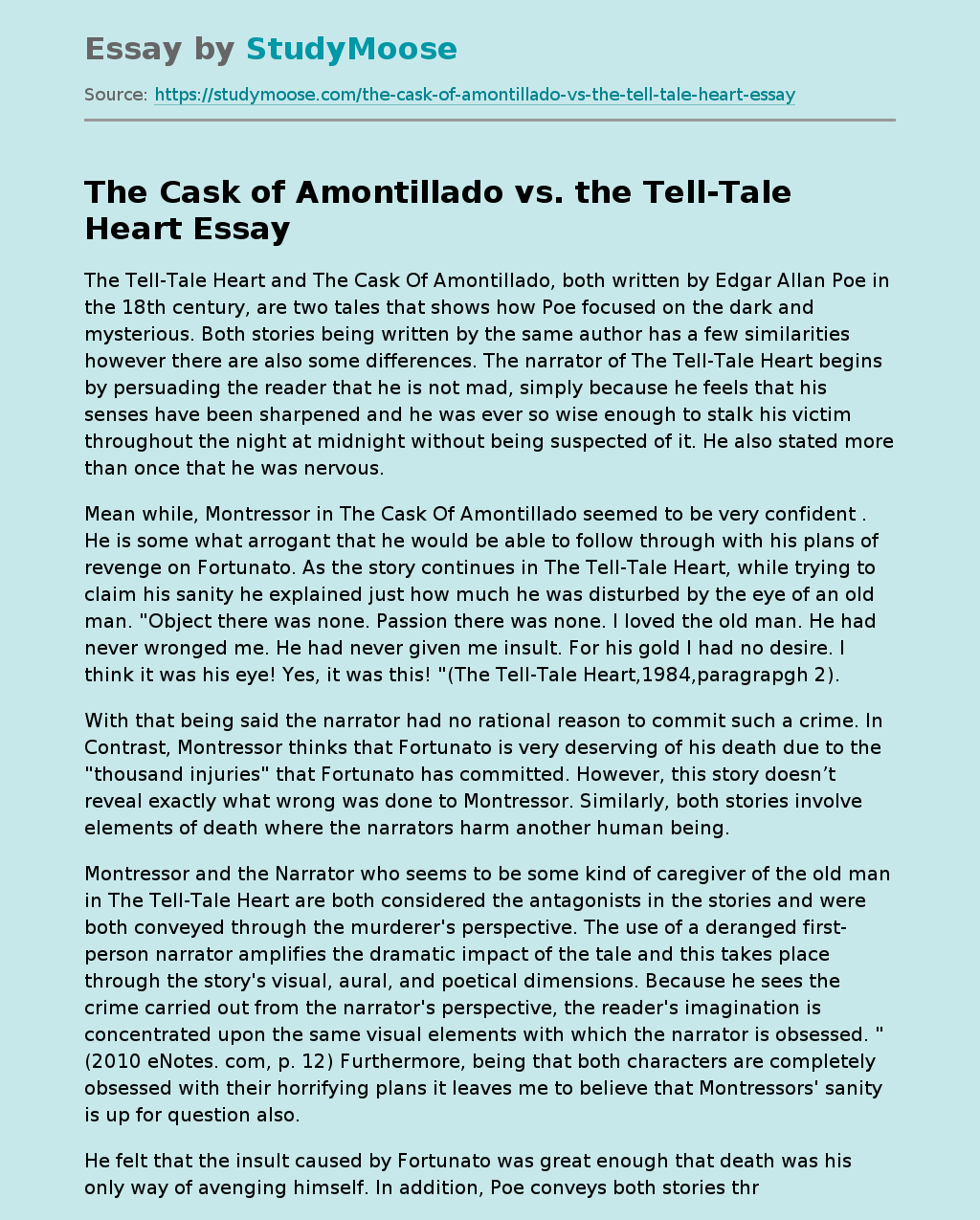