The Case of the Speluncean Explorers

The purpose of this essay is to critically analyse one of the five judgments in the case of the Speluncean explorers. There will be three main parts to this essay. First, five key aspects that were evident in the Judge’s decision making process will be summarised. Second, fundamental aspects of legal positivism will be identified and described. Finally, a critique of legal positivism will be provided utilising two main concepts from this theoretical perspective. Chief Justice Truepenny’s decision making process will now be summarised.

Trupenny used the following key aspects to make a decision on his judgement on the Case of the Speluncean Explorers. All judges must follow Laws of Commonwealth, which are set laws made to assist judges in arriving at a fair and lawful decision. This permits the judge no discretionary power in relation to the penalties that he can impose. In this case the judge had to look at the facts and use the Law of Commonwealth to decide the penalties that would be imposed on the defendants.

The judge also used a special verdict to assist him in determining a reasonable punishment.

In this case the Foreman of the jury raised the idea of a “special verdict.” A special verdict is when the jury provides the facts involved in the case and leaves the end verdict for the judge to decide after considering the application of law. The Prosecutor and counsel for the defendants both agreed on this course of action, it was then accepted by the court.

After the jury regarded all facts of the case, the trial judge decided that the defendants were guilty of murdering Roger Whetmore and consequently they were sentenced to be hanged.

The judge also used the literal rule to interpret the statute. The literal rule is a rule that uses plain, literal and grammatical meaning of the words in a statute to explain what the law is. In this case the statute of our law was “whoever shall wilfully take the life of another shall be punished by death.” The literal rule is a well-known statute and is usually applied by courts before any other laws of interpretation. The trial judge applied only the course that was open to him under the law. Although Trupenny believed that we should have had sympathy for the explorers due to the circumstances that they found themselves in our statute allowed no exception applicable to this case.

The judge believed that the principle of executive clemency was necessary in this case and should be considered. The principle of executive clemency is where the President in criminal cases and the Governor in state convictions have the power to excuse a person of a convicted crime, alter or reduce a sentence from death to a smaller punishment. This gives defendants fairness and rights considering the disastrous situation they found themselves in. The jury members agreed with Trupenny and asked the Chief Executive if the sentence could be reduced to six months. Trupenny thought that if the executive clemency was passed then justice would be accomplished without disregarding the law.

Positivism originated from the Latin word positus, which means to posit, hypothesise or firmly affix the existence of something (Kramer, 1999). It was first adopted to imply the idea that law is positive. Governmental bodies and officials create statutes which have clear and firm meanings which are then used by positivists to define the law. Early political philosophers, Hobbes and Hume, were the first to explore the important roots of legal positivism. Bentham then completely elaborated the theory and Austin soon after implemented, modified and popularised it (Austin, 1995).

A judgement, decision, rule, regulation or principle will qualify as a law when it is clearly recognised by an official or governmental body (Kramer, 1999). As a positivist, Trupenny would have argued that behaviour will not be recognised as law if the behaviour is expressed by anyone other than governmental bodies or officials. By using this principle, Trupenny was able to come to his judgement without letting personal opinions or experiences alter his decision. This also means that legal positivism is theoretically separate from moral and ethical values (Hart, 1965).

According to legal positivism, there is no relationship between the validity of law, ethics or morality (Himma, 2002). One of the key aspects to interpreting how judges respond to the most essential question of jurisprudence is “what is law?” Judges interpret statutes with no discretionary powers. “Statutes are pre-legal, political acts whose only interest for legal philosophy is the way in which they disturb judicial deliberations” (Kramer, 2001).

When Austin 1995 adopted legal positivism, he constructed three basic points to his positive theory of law. The first was that the law is command issued by the uncommanded commander – the sovereign, meaning that a command can only be enforced by governmental bodies or officials (Austin, 1977). The second key point was that such commands are backed by sanctions; this being that legal duty is a liability to a sanction for rejection to comply with the command. The last point was that a sovereign is one who is obeyed by the majority, the sovereign being one who is a superior to an inferior (Austin, 1995). Positive laws are introduced directly by three kinds of people according to Austin. These are monarchs, sovereign bodies and supreme political superiors, who are men and women in a state of subjection with political powers.

When removed from principles of morality, fairness and justice, written law ceases to be lawful. Positivists are given the ability to secure the rights of individuals and also govern with integrity (Hart, 1958). By only looking at the law itself, positivists are able to not judge law by the question of justice or humanity.

Legal positivism consists of many positive traits. Positivists use statutes to interpret the law; this allows individuals to have their rights safe guarded and to always know their position when it comes to government. This also ensures that no one is treated unfairly or unjust, and guarantees that no offender is punished by an un-written law. Therefore individuals always have their rights and laws available to them (Kramer, 2001).

Another valuable trait of legal positivism is that judges are in no way, shape or form allowed to let personal predilections affect their decision-making. Therefore judges maintain that the integrity of the law will not be guided by subjective notions of right and wrong but only through neutral and objective judiciary (Marmour, 2005).

Critics of positive law believe that this theory leaves a significant amount of space for the law to be used against individuals. Positive law does not leave any discretionary power for the judge to give morality to their decisions. This is a disadvantage of positive law as it is unfair and leaves individuals with no justice (Kramer, 1999).

A similar disadvantage to legal positivism is that the theory states that it does not require any sort of ethical justification of the statutes themselves (Himma, 2002). It also does not need a decision for or against the obedience to the law. Legal positivism consists of four different theses’, these include the Social Thesis, the Pedigree Thesis, the Separability Thesis and the Discretion Thesis.

The Social Thesis suggests that law is a social institution where the question ‘what is law’ is based purely on social facts (Austin, 1995). Hobbes, Bentham and Austin were the originators of this thesis and believed that general social facts about political sovereignty determined what the law is. This thesis was then adopted in the 20th century by legal positivists and modified by placing emphasis on social rules (Marmour, 2005). These social rules then determined what the law in that society is.

The Pedigree Thesis was originally from Bentham but then adopted by Austin and modernised (Hart, 1982). Austin claims that legal legitimacy is an important function of social facts (Austin, 1977). This thesis suggests that the sovereign, being a governmental body or official who holds the most power in the society, is a distinguishing feature of the legal system. The problem with this theory of law is that there is no specific sovereign for the community; therefore this makes this theory inconsistent (Hart, 1958).

Discretion Thesis is used on complex cases only. This thesis allows a judge to exercise his discretion in such cases that cannot be decided by simply ‘applying the law’ (Marmor, 2005). In this case a judge must either amend a law or decide on a new law, that does not already exist, that will specifically apply to the case. Not all positivists utilize the Discretion Thesis as it is not often viewed as a significant part of positivism (Kramer, 2001). This is because this thesis is occasionally more consistent with the natural law theory as it allows judges some form of discretion.

Legal positivists created two models of positivism, inclusive and exclusive. Inclusive is also known as incorporationism and soft positivism. This model suggests that society’s rules of recognition to incorporate moral constraints on the content of the law are highly likely (Kramer, 1999).

Whereas the exclusive positivism model, also recognised as hard positivism, denies that the legal validity incorporated by moral constraints by a legal system. It also disputes that judges are required to use moral ethics when amendments arise in ‘special cases’ (Austin, 1977).

Most positivists share similar attributions and beliefs, some of these can include that the idea that the law is essentially a means. This suggests that the law consists of social control as it can be put to positive and negative use (Austin, 1995). “In legal theory, Legal Positivism is generally taken to be the view that the concept of law can be elucidated without reference to morality, and that is the duty of judges to determine the content of and apply the law without recourse to moral judgments (Marmor, 2005).”

The Case of the Speluncean Explorers. (2016, Mar 18). Retrieved from http://studymoose.com/the-case-of-the-speluncean-explorers-essay 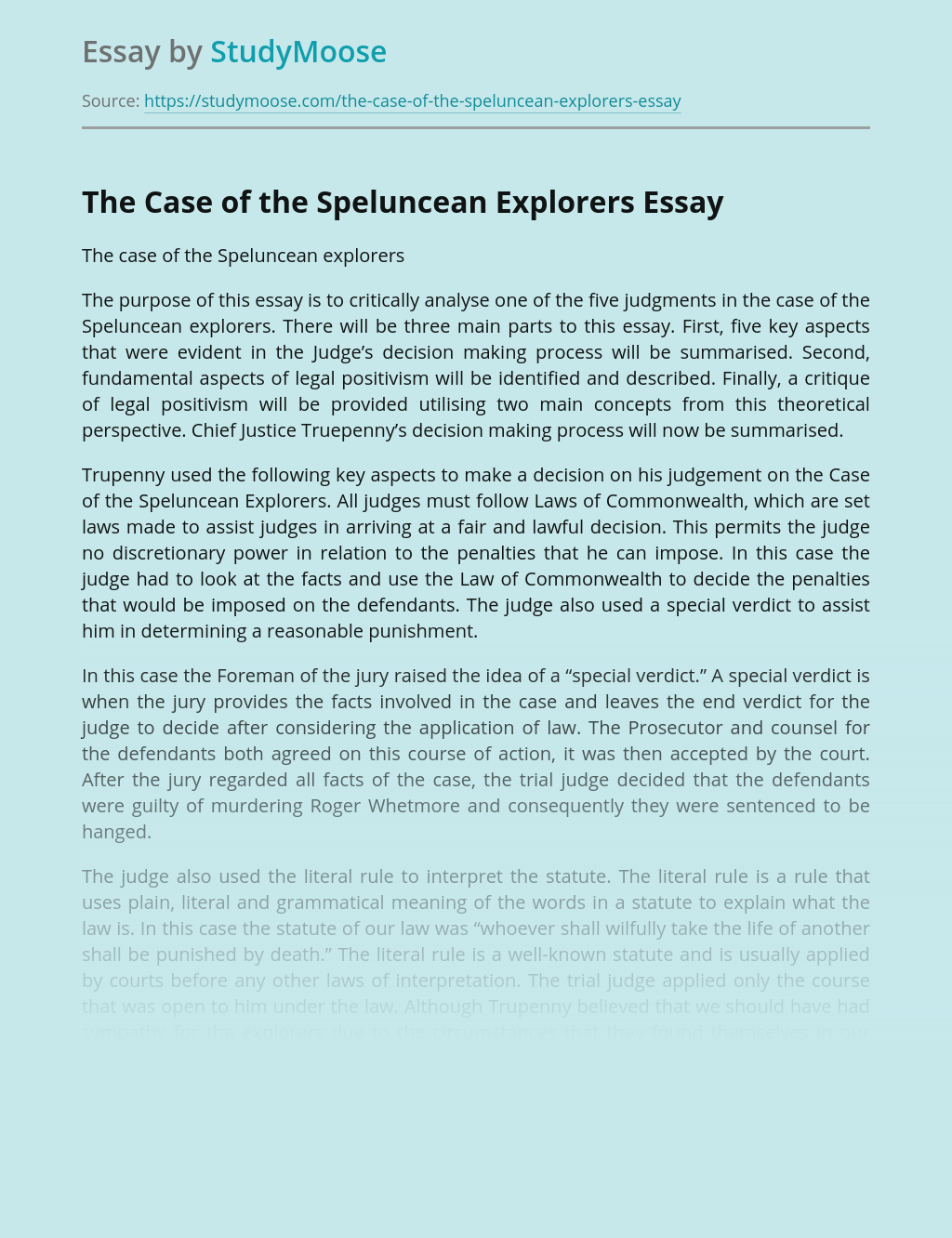 Don’t waste time
Get a verified expert to help you with The Case of the Speluncean Explorers
Hire verified expert
$35.80 for a 2-page paper
Stay Safe, Stay Original