What are the basic facts?
Merck & Co. Inc. is one of the world’s largest pharmaceutical companies in the world for producers of prescription drugs. Merck had sales of 1.98 billion and net income of 307 million in 1978 and continues to steadily rise. Merck invested hundreds of millions of dollars each year in research and allocate the funds amongst various projects. On average it would take approximately 12 years and 200 million dollars to bring a new drug into the market. Many potential drugs offered little chance of financial returns, as some diseases were so rare that treatment could never be priced high enough for the company to recoup the investment.

River blindness, also known as “onchocerciasis” is a disease found in over 35 developing countries throughout the Third World. The cause of the disease came from parasitic worm that were carried by black flies.

In 1978, the World Health Organization (WHO) estimated that approximately 340,000 people were blind because of this disease and 18 million or more were infected with the parasite, but not many showed symptoms. Merck researchers have found a compound called ‘Ivermectin’, which has proven to have an astonishing effect against wide range of parasites in animals. Dr. Campbell proposed the idea to have the compound formulated to work against human parasite, but the success rate was very low. Even if the drug was successful attained, the economy viability would be nil and no U.

S. or international program would create any incentives for Merck to develop drugs for diseases like river blindness. What are the ethical issues?

The ethical dilemma is that Merck & Co have to make the decision whether to pursue research for river blindness disease that may or may not result in profits, or to choose a safer route and go look towards profits. Also from the view of society’s prospective, Merck and Co. are ethical obligated to proceed with the development of the drug, whether or not the chances of the success was small.

What are the effects on each group, company, investor, employee, consumer, and/or society?
Society – People in third world countries that are suffering from river blindness would directly benefit for a potential cure if Merck & Co. pursue developing the drug.
Employees – Employees that are currently working for Merck & Co. may be affect financial if the company doesn’t make a profit from the potential new drug. Researcher and scientist are a pharmaceutical company’s biggest asset in terms of resources.

Shareholders – Investors may be inclined to contribute funds for Merck & Co, as they would not get a return on their investments, if they results of the compound came out poor
Merck & Co – Merck has everything to lose if the outcome for formulating a new compound for river blindness was unsuccessful. Not being able to turn a profit on their new drug may have negative effects on shareholder’s value, but this would also boost the reputation of Merck & Co for doing the ethical thing. What are the alternatives?

What is your decision? Justify it.
Merck & Co should continue research and develop a formulated compound for river blindness. One of Merck’s philosophy is that “we try never to forget that medicine is for the people, it is not for the profits”, which makes sense ethically for Merck & Co to pursue in investing in developing a drug for river blindness. Merck’s value system is important here and if a company states that it values people over profits, it should fulfill their obligations. Merck is also the only pharmaceutical company that has found a compound with the highest chance at success in fighting river blindness disease. The advantages of developing this drug would help millions of people that are infected and help increase their reputation in society for doing the ethical thing in their current situation. What are strategies to overcome possible negative feedbacks? Some strategies to overcome possible negative feedbacks are: Try getting incentives from the government if they choose to pursue in funding treatment for river blindness Get support from other pharmaceutical company instead of developing the compound alone (financial and resources)

The Business Enterprise Trust Case. (2016, May 16). Retrieved from http://studymoose.com/the-business-enterprise-trust-case-essay 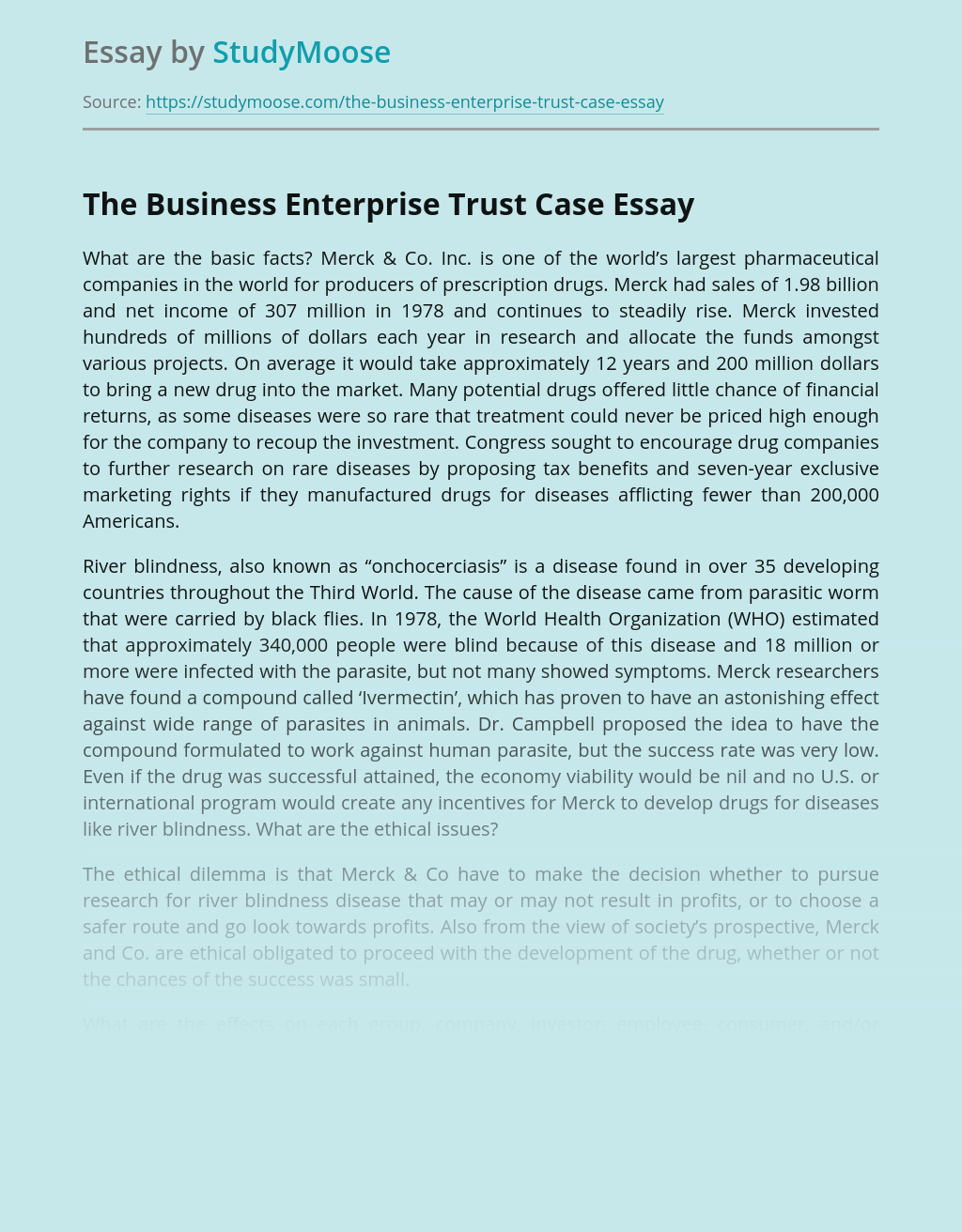