The Burial at Thebes

What is the main contribution made by the Chorus in The Burial at Thebes? Answer with specific references to the text of the play.

In this assignment I aim to show the main contribution made by the Chorus in The Burial at Thebes and in doing so I shall answer with specific references to the text of the play. Whilst working through the play I shall consider and explore several contributions, this will include; how the Chorus is used to link the narrative of the play, how the Chorus serves as a voice for the community of Thebes, how the Chorus acts as a critical friend of the two main character’s Antigone and Creon and finally how the Chorus offers opportunities for reflection for these two character’s.

Don't use plagiarized sources. Get your custom essay on
“ The Burial at Thebes ”
Get custom paper
NEW! smart matching with writer

I shall argue and provide evidence that the main contribution made by the Chorus is how it is used to link the narrative of the play and show how they connect with the other contributions and themes within the play.

In the opening sequences of the play a degree of conflict quickly becomes apparent between Creon and Antigone, that of Creon’s duties to the law of the land and Antigone’s values with the laws of the Gods. The parodos is the first contribution made by the Chorus and here they serve as a voice for the community and are depicted as being a group of Theban elders. They are celebrating the aftermath of the civil war they have just won ‘A god of war stiffened our will and locked our arms, so the line held’ (Heaney.

S, The Burial at Thebes, 2004, pg. 8) and chant several times the lines ‘Glory be to brightness, to the gleaming sun’ (pg. 8). These lines are strongly poetic and express not only the elder’s feelings but also the community’s feelings of victory and new beginnings.

This opening parados provides a link with the first episode of the play where the Chorus helps to promote and communicate the theme of politics and power, ‘He’s a new king but he’s right for this city at this moment’ (pg. 9). The Chorus are adding strength to the public speech given by Creon where, as the new ruler, he details his plans for the burials of Eteocles and Polyneices. In the course of this episode it comes to Creon’s attention that there has been an attempted burial of Polyneices. This enrages Creon and during the stichomythia between Creon and the Guard the Chorus contribute by expressing a fear that it was the will of the gods (pg. 15). The Chorus is linking the theme of politics and power with that of taking a risk and plant a seed of doubt in Creon’s mind.

The main contribution made by the Chorus in the first stasimon, based on the Choral Ode ‘Ode to Man’ (pg. 16-17), links the narrative of the Guard’s first encounter with Creon and his return with Antigone after catching her attempting burial rights on Polyneices. Here the Chorus express concern between the new laws, that of Creon’s rule and traditional values, that of the laws of the gods ‘Overstep what the city allows, […] He’ll have put himself beyond the pale’ (pg. 17). The Chorus is perhaps used here to warn the audience of the consequences of one’s actions.

Moving forward into the second episode the Chorus interacts between Creon and Antigone’s fraught debate adding criticism that she gets her wild ways from her father Oedipus and warns Creon that she won’t back down (pg. 21). As the Chorus acts as a critical friend and finds fault in Antigone they are also linking another theme, that of family ties and here they add emphasis to the myth of Oedipus’s family curse surrounding the play.

The second of the Chorus’s stasimon focuses again on the myth and contributes by reciting the tragic history of Oedipus’s family and thus linking it to the narrative of the play. In the stasimon the Chorus expresses a high degree of grief and misery of a curse that never relents, ‘Break on the inmates and keep breaking on them’ (pg. 28). Here the main contribution of the chorus is to link the episodes that follow and they do so in a way that is strongly poetic and which raises the emotional level of the audience in favour of Antigone.

The third episode introduces Haemon, Creon’s son and at first it appears that he is on his father’s side. The Chorus contributes here by interacting between the two men firstly sympathising with Creon and his plans to punish Antigone (pg. 31) then by advising Creon he should take heed of his son’s advice (pg. 32). The contribution made here by the Chorus is that they act as a critical advisor to Creon, as members of the Theban community they are aware that Antigone is seen as a heroine and as the episode progresses question whether Creon is doing the right thing by punishing Antigone. So much so they manage to dissuade Creon from punishing Ismene (pg. 35).

After the third stasimon and into the fourth episode, the Chorus contributes by interacting with Antigone and offering her an opportunity to reflect on the actions that has caused her impending death. Although she remains defiant she is fearful and the Chorus tries to comfort her by telling her she will be honoured by the gods for staying true to her values ‘You would not live a lie’ (pg. 37). The Chorus are connecting the theme of the god’s role in human lives and also reflects on Antigone’s actions, they pity her but comment that she may have been carried away and is now to pay a heavy price for her deed and that of her father’s past life (pg. 38).

The fourth stasimon provides the link between the episodes once more. The Chorus seem to be looking to the gods to spare Antigone and the level of suspense appears to have been intensified with the line ‘Whoever has been spared the worst is lucky’ (pg. 42). A dramatic turn in events happens when Tiresias, a blind prophet, comes to speak with Creon and offer him some words of wisdom. He warns him that the gods will bring a curse on him and his family if he does not free Antigone. The Chorus plays a major part here and contributes by reminding Creon that Tiresias is never wrong and advise him to do just as he says (pg. 47). Creon fears the worst and reluctantly goes to free Antigone.

The fifth and final episode allow for the Chorus to interact with Creon and contribute by offering him an opportunity for reflection as they did with Antigone in earlier scenes. It has come to light that Creon’s change in decision has come too late and has had devastating consequences for him. Antigone has hung herself, Haemon has turned a knife on himself and Creon’s wife Eurydice has also committed suicide. Creon is left to reflect on his actions and the Chorus comments that he has realised the errors of his ways too late (pg. 53). The Chorus also contributes by advising Creon that he is to face his fate ‘Bear with the present; what will be will be’ (pg. 55). The Chorus are connecting with the protagonists’ feeling of impending doom.

In the final part of the play the Chorus gives a short moral speech directed to the audience, they advise that the gods rule and should be shown respect and that the key to happiness is wisdom (pg. 56). The main contribution here is to tie with the preceding episode and allow the audience time to reflect on what they have just witnessed, linking poetically with the theme of the gods role in human lives.

To conclude the structure of the play is marked out by themes that are developed throughout the play. The role of the Chorus provides links between the episodes whilst commenting on the actions of the play and to contribute and interact with the characters. In this assignment I have aimed to show that the chorus makes several contributions at different stages throughout The Burial at Thebes. These being, by speaking in unison and acting as a voice for the community, at times asking questions and serving as a critical friend of the main characters and offering moments for the characters to reflect on their actions and the consequences derived from them. Above all my judgement is that the play as a whole would not be complete if it was not for the main contribution made by the Chorus in linking the narrative of the play. In doing so they interact with the characters, comment on their actions and mediate between the characters and the audience adding weight to the themes developed throughout the play.

The Burial at Thebes. (2016, Nov 15). Retrieved from https://studymoose.com/the-burial-at-thebes-essay 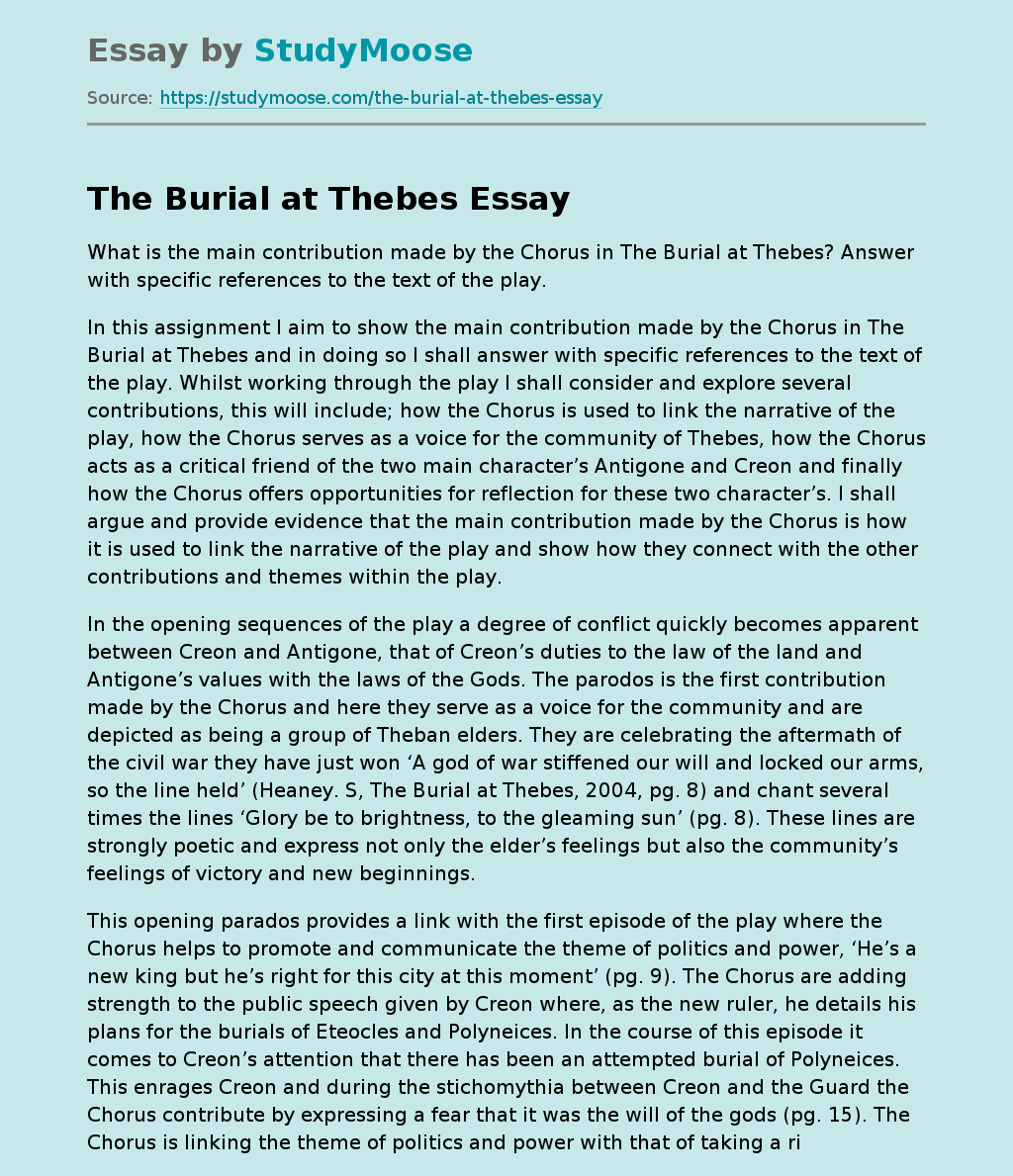