The Bronze Statue of Camillus

When approaching gallery 166 at the Metropolitan Museum of Art, I couldn’t help but notice the magnificent sculpture of the “Bronze statue of Camillus (acolyte). ” As I began to study some background information on the early Imperial period of Roman culture, one would learn that there was an evident revival. The Romans were building at a fast pace and religious sacrifices were becoming more common. Throughout this Roman period, a Camillus (male) or Camilla (female) was the freeborn child of the religious cults officiant.

Don't use plagiarized sources. Get your custom essay on
“ The Bronze Statue of Camillus ”
Get custom paper
NEW! smart matching with writer

These young boys were selected to serve during religious ceremonies where sacrifices were customary. The sculpture was assembled to be perceived taller than it really was and stood on top of an approximately 4×4 foot concrete cube that helped signify the importance of the statue. The statue itself was exactly 46-1/8 inches tall, which offered the idea that it was indeed a young boy rather than a man. The color bronze is considerably consistent throughout on the statue.

I will add that his eyes are paneled silver, while the lips are copper.

I found the color in his face to suggest more humanistic qualities than not. Because the sculptor purposely gave the statue’s eyes and lips a different color than the rest of he piece, it gave me the idea of a human. Additionally, the young boy was wearing a robe that ended at bottom of his knees and had open toed sandals on his feet. Although the boy was in a robe, one could articulate that he does have a rather slim fgure.

On another note, I found it very interesting how this statue was in somewhat of an open area, thus dominating Gallery 166.

I feel as if the curator desired to show the viewer that the Camillus were significant to the Romans throughout this period. Observing the statue was quite intriguing because many would find it difficult to erceive the young acolytes mood through his very straight and relaxed facial expression. The fgures stance gave me the idea that he is indeed “here to serve,” by the way his left arm was up as if he was holding a ritual object. His left shoulder was also leaned forward resembling the idea of giving or serving.

Furthermore, his right arm was at his side with his four fingers curled where he would probably be found holding a Jug of wine. Movement was not only conveyed in his Just upper body, as the viewer sees that his left leg is found slightly behind his right, with its knee bent and the heel off the ground. Overall, I found the sculpture to represent the generic idea of a Camillus in ancient Rome. The sculpture did a fine Job symbolizing how the figures face, short hair, and body would be portrayed as an average human boy.

Additionally, I think that most people would portray this figure to be a young boy from ancient Rome, particularly because of his Romanist robe and sandals. A painting that caught my eye while in the museum was “The Mass of Saint Basil” by Pierre Hubert Subleyras, which was displayed in Gallery 620. During my observation of the piece, I found qualities that matched the “Bronze statue of Camillus (acolyte). Similar to the sculpture, the scene on the painting is held in Rome and is portraying a religious Roman ceremony.

I was intrigued with the robes and open-toed sandals that the young men on the side were wearing. Not only were the outfits similar, but also the men on the side, and the sculpture of the young boy have the same short and wa’. y hairstyle. Both pieces are Romans in religious episodes, offering the viewer the qualities of the individuals seem to be essentially the same in both pieces, thus leading me to the explanation of how the young man was viewed in Ancient Rome.

The Bronze Statue of Camillus. (2018, May 25). Retrieved from https://studymoose.com/the-bronze-statue-of-camillus-essay 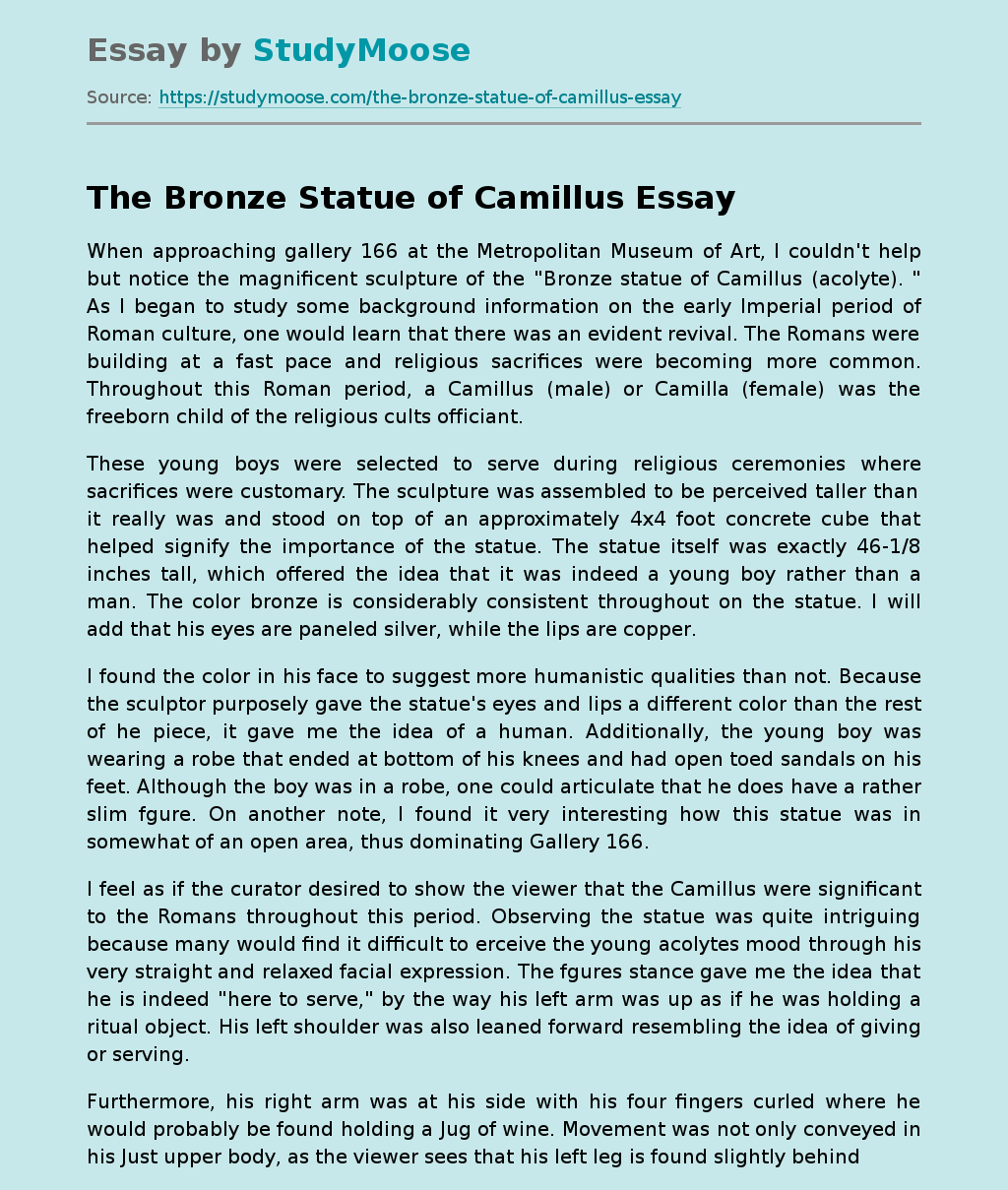