The Book Thief by Markus Zusak illustrates a wide array of details from around World War 2. Zusak shows off his intellectual abilities by portraying severe that are somewhat graphic in nature. The setting in which he sets this novel is a very hard time in world history. Nazi Germany was a horrendous place to be during the time, but when Jews were involved things got worse. This bestselling novel is an accurate depiction of the hardships, and the daily life of many facing this time.

Don't use plagiarized sources. Get your custom essay on
“ The Book Thief by Markus Zusak: Daily Life During WW II ”
Get custom paper
NEW! smart matching with writer

The story line follows a young girl as she deals with rough times, that isn’t just the war going on around her. When her family takes a toll, her world flips and she turns to books, but books are hard to find so she turns to other means of acquiring them. Later, she gets a surprise that she couldn’t even expect.

The beginning of the novel starts out with the death of Liesel’s brother.

Her brother passes on a train bound towards Munich, Germany. The narrator states, this is the first time he saw the book thief. The book thief got her name from when she stole a gravedigger’s book that was partially covered in the snow when she got off the train. When she arrives at her new foster home, she begins to learn how to read from her foster dad, Hans. This is where her fascination with books really took hold. She began learning to read with the book she had stolen from the gravedigger.

This was where her book thievery really started, later she began stealing from Nazi book burnings and even the mayors’ wife’s personal library. Her first accounts of thievery were random, but as it continued she started stealing books that fit her more. This shows just how far people in this time were willing to go for something they wanted. Zusak portrays the hardships of just a few people in this novel, but they weren’t the only people facing this type of cruelty.

Liesel is an orphan; her father was never around, and her mother handed her over to her foster parents. When her brother died she really had no family left. Her new foster parents, Hans and Rosa Herbermann, weren’t much but they were what she had. Hans wasn’t much for talking but he could play the accordion well. Rosa does the laundry for the more well-off people in town. This is how Liesel gained access to the mayor’s library. Liesel finds a new friend in a neighborhood boy named Rudy. Rudy had a yellow shade of blond hair and was very fond of Jesse Owens. 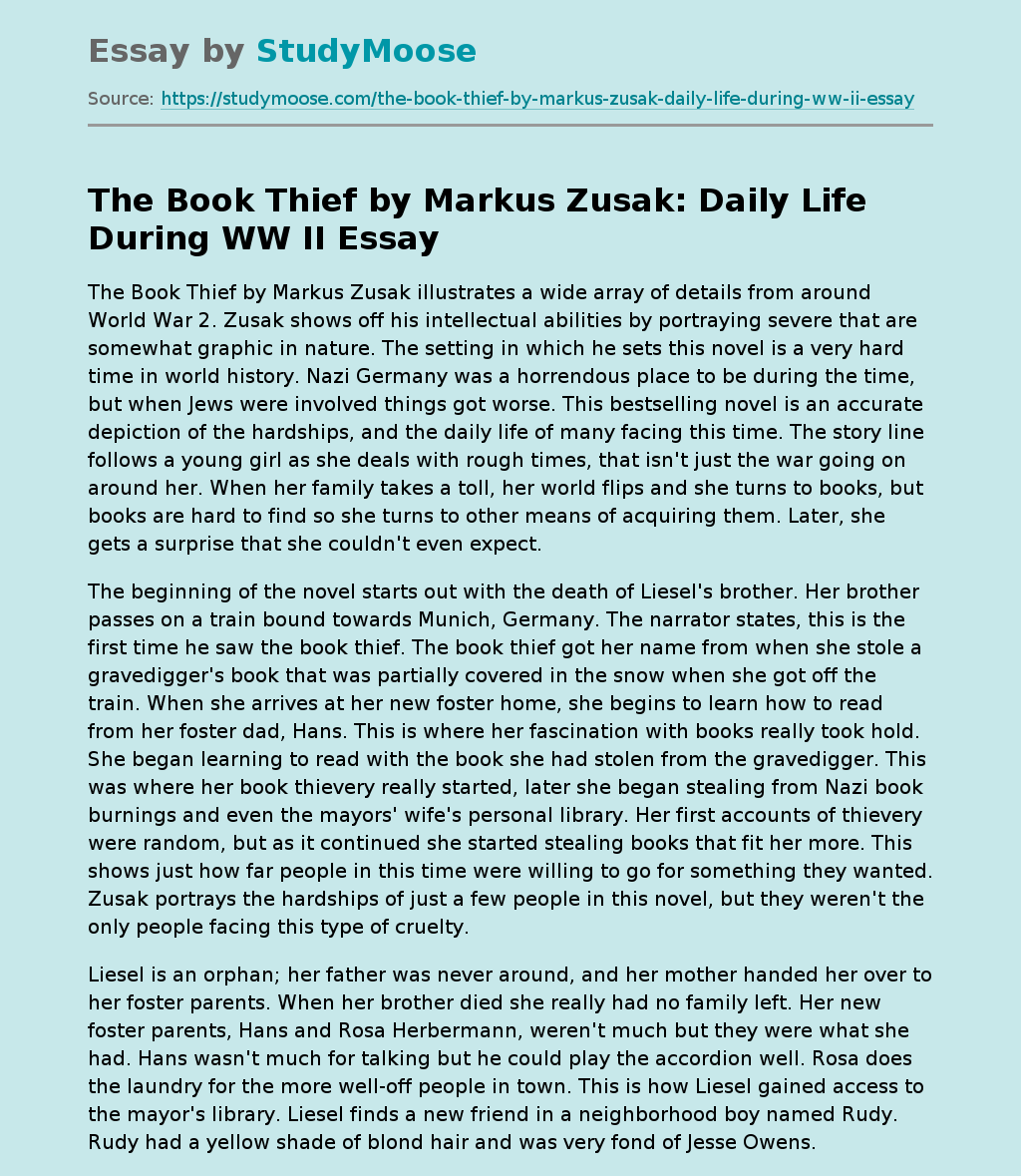