The Book of Michael Grove

Michael Grove is a private investigator who, through a series of unfortunate events, has himself, become the suspect of a crime he did not commit. After losing his love, Lisa at the hands of a murderer, Michael is acussed of this same crime. Through the investigators flashbacks, seeking advice from his Grandmother Phyllis, and his own personal research, the character proves his innocence. The methods of investigation used by Michael Grove in Lesley Choyce’s, The Book of Michael, reveals that he is genuinely a good guy.

Don't use plagiarized sources. Get your custom essay on
“ The Book of Michael Grove ”
Get custom paper
NEW! smart matching with writer

One of the methods Michael Grove used to solve this crime was flashbacks. The investigator had flashbacks about everything, because of this, Michael was able to analyze things in his mind, over and over. He would replay them from beginning to the end. Choyce demonstrated several times that the investigator would never let go of the memories he has had with his girlfriend, Lisa, who was recently murdered or his ex-girlfriend, Miranda, his suspect.

This emotional portrayal of the investigator exposes his character as a very sentimental individual.

Michael recalls, “… we walked through the woods that night, Lisa dropped her hat a few feet back, I ran back to get it for her. I remember, and I smelt Miranda’s perfume in the air. It is a distinctive smell. I didn’t think much of it until now” (Choyce 43) the character is having a flashback that brings him to the point in time when he was with his girlfriend in the woods.

He is remembering that scent of perfume which he had smelled earlier that same day. The investigator is stating that they were not the only ones in the woods at that time. Michael 2 nalyzed this through his flashback, it did not seem as important to him until now. Choyce shows that Michael associates Mascarenhas memories to specific smells. He is a visual person who uses all his five senses to recall a memory. Much of this investigators judgements are made from his gut instinct. For example, Michael felt that someone was watching him whenever he was with Lisa. But is the investigators personal perception of the memory accurate? Or is it biased by his feelings for Miranda and/or Lisa. Michael is such an emotionally charged person, perhaps there is a lack of clear judgement?

Grove later states,“we were in the tent in the back that night, I heard a twig snap and leaves crunch but I owed it all to Lisa’s dog” (Choyce 44). In the moment, small noises which would normally be investigated are not and assumed to be the family dog. Michael is enjoying his time with Lisa. As he reflects he realizes that there may have been another source responsible for the sounds he heard. Was it the dog or possibly an individual? The character did not feel the importance until he reflected upon it and now believes there may be foul play involved.

A strong connection with Phyllis

Is there evidence that Michael may therefore, not be the killer? People don’t usually expand a situation fully until they begin to talk about it with other individuals. To further investigate, Michael sought some advice from his Grandmother, Phyllis. Michael has such a strong connection with Phyllis and such a great amount of respect for the elderly, it is only natural that he would turn to her for guidance. Phyllis explains to Michael, “… follow your heart dear. It will never steer you wrong. ” (Choyce 87).

What the author is trying to say here is to always follow your gut instinct. Whenever one is in doubt they should always listen to their heart because it can never guide you into the wrong path. This confirmed that Michael’s approach is dominated by his emtional stake in the situation. His grandmother, with her wisdom, knew her grandson’s character and confirmed this point. Later Michael’s Grandmother helped him to recognize, “Sometimes we need to look at things with fresh eyes.  The answer can be right in front of us but we are too focused to see it” (Choyce 111).

Michael, being the spiritual person that he is, appeals to this sense and tells himself to slow down and he will find his answers. This gives Michael the confirmation he needs to continue his investigation on the same track. Michael as an emotional being, trusts his love for his Grandma and trusts her wisdom. Her words give him the power to go forward and reveal his suspect. Michael is very interested in reading; he and Lisa would spend a lot of time reading together. When he lost her he began to research many books on death, life after death, crimes, jealousy, and so on.

The investigator uses this knowledge to disect the information at hand. He takes the whole night apart, moment by moment until he finds the point where things changed. Once that moment is found he and then disects it further. His intelligencce and skill is relied upon heavily. Michael struggles within himself to deal solely with fact as his emotions and instinct attempt to overpower him. Michael explains,“Reading is what kept me going in my darkest times. It fed my mind and my soul” (Choyce 146) Choyce has clearly displayed Michael’s trait as an intellect. By feeding his mind, he fed his soul.

He lost himself in the pages he read, digesting the words he read on paper, finding a mode to survive his purgatory. Michael reveals, “I feel that Lisa is speaking to me through the pages I read. She’s guiding me through all of this, and it will be okay if I just listen” (Choyce 187). This demonstrates that he has his own intelligence and skill but he also relies on his faith. The character feels as if he is being guided, by an outside force. He is a spiritual person and loves Lisa, so any direction that he recieves, he believes is coming as intervention from Lisa.

Michael Grove, the investigator, used many methods of investigation to reveal who he really is and in doing so, reveals his integrity. His knowledge, experience and skill showed throughout the novel. It would be easy to believe that he was the last person with Lisa before she 4 died, but that was not the case here. Michael Grove has succeeded and definetly proved that he is a good guy. Sitting in a prison cell, he is not at all what he would appear to be. He is a kind and sincere man missing the woman who he fell in love with. Not all is what it seems.

The Book of Michael Grove. (2020, Jun 02). Retrieved from https://studymoose.com/the-book-of-michael-new-essay 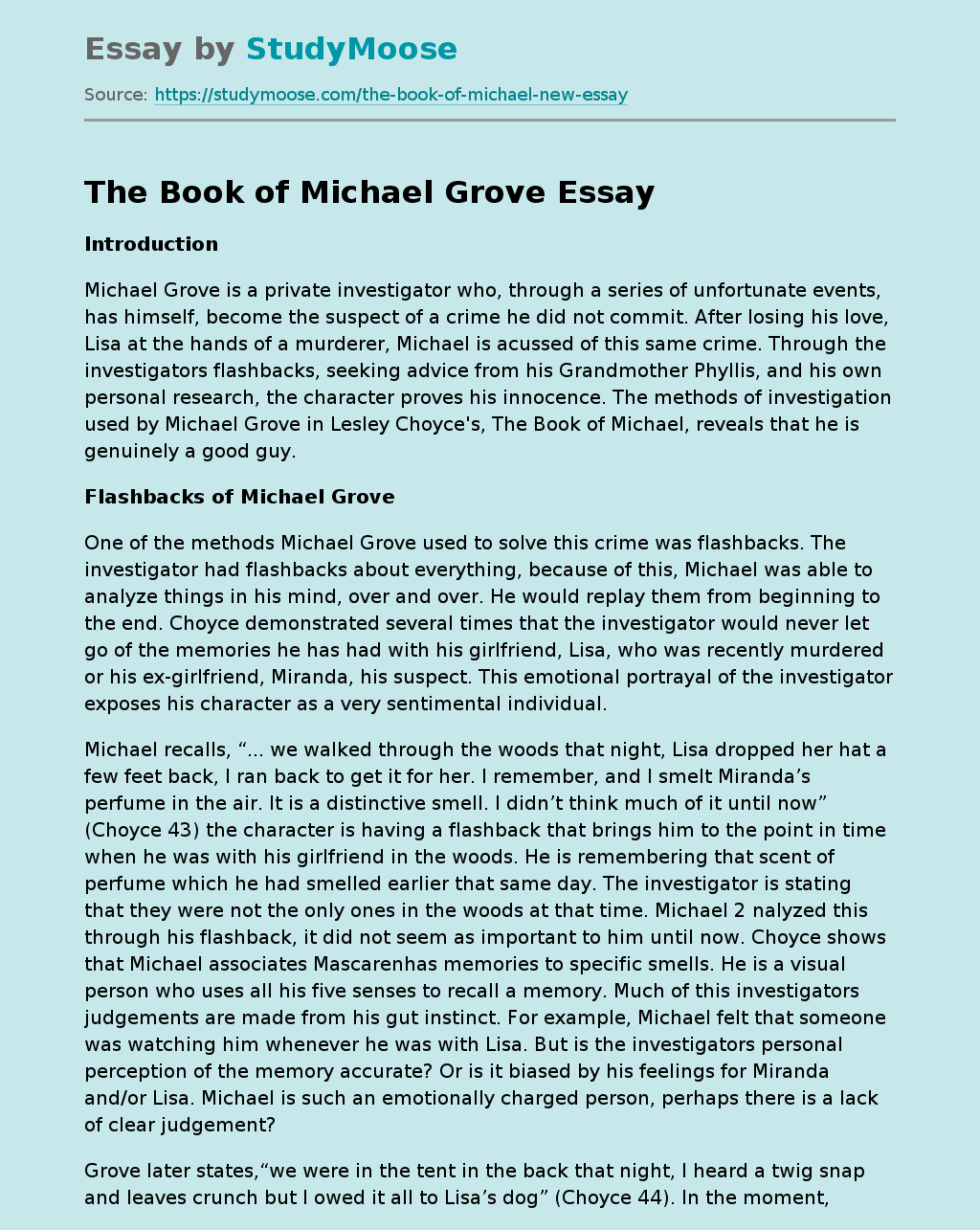