The Book "Crabbe and Why He Ran Away"

Crabbe decides to run away from home because he’s unhappy with his life. Much of this unhappiness is the direct result of the poor guidance he receives from the bad adult role models with whom he is surrounded. Crabbe decides to run away because he’s unhappy with his life. There are many signs that show Crabbe’s unhappiness. Crabbe’s parents make him feel like he’s not good enough to be their son. They never let him do what he wants to do and they dictate his life to what they want.

Don't use plagiarized sources. Get your custom essay on
“ The Book “Crabbe and Why He Ran Away” ”
Get custom paper
NEW! smart matching with writer

Crabbe’s relationship with his parents is that it is a dictatorship. Crabbe says, “I wasn’t alone. My Mother swallowed valiums everyday; my Father drank heavily, if you counted the wonderful business lunches and what he poured down at home; lots of kids at school smoked grass regularly and drank at parties. I was no different.” Crabbe doesn’t drink a lot, but he drinks all the time.

Here is a quote from Crabbe: “But, like the runner, I wanted to do something that would symbolize what I thought and how I felt.

” Many of Crabbe’s teachers are hypocrites and poor role models. Crabbe does not want to be like them. Crabbe dislikes some teachers like Fat-Ass Grant, Miss. Wase, French teacher, Beaker Baker. Crabbe dislikes Fat-Ass Grant because he busted him for drinking in school. “He was king of jock city, the phys ed. Department, and his idea of a stimulating lesson was to blow his whistle, roll a couple of basketballs out onto the court, and yell, ‘Okay, scrimmage! Warm up for ten minutes.’ And waddle back into his office where he’s lower his two hundred into an old swivel chair and flip through a sports magazine for the rest of the period.” Crabbe doesn’t like Miss. Wase because she had interrupted him while he was answering her question. He doesn’t like the French teacher because he would ask for volunteers and when Crabbe put up his hand, the teacher wouldn’t ask him anymore.

Beaker Baker had just hemmed and hawed and rambled all period because he didn’t really want to teach. Crabbe’s teachers are poor role models because they don’t teach a class and they just talk about nothing. Crabbe’s parents are materialistic snobs whose way of life he hates. He does not want to grow up to be like them. The brass candelabra symbolize his parents’ way of life because it cost a lot of money and his parents are rich snobs. His parents’ way of life is that money is everything and Crabbe doesn’t want to live a life like theirs because he hates his parents and wants to do things for himself. “My Mother got hysterical, wept, clutched her napkin in her hands, criticized my ingratitude and laid out the inventory of how lucky I was and all they’d done for me.

My Father took the other line, lecturing me in what he thought was a reasonable voice about how I should use my God-Given Talents to make something of myself— which meant getting money in large quantities— and stay away from left wingers, eggheads, and so on.” His parents make him feel invisible and neglected because they keep playing the same game, out of tune, and out of sync every night at the dinner table. Since Crabbe doesn’t have any good role models in his life he decides to run away and take care of himself. If Crabbe had better guidance from his role models he might not have ran away from home.

The Book "Crabbe and Why He Ran Away". (2016, Jun 27). Retrieved from https://studymoose.com/the-book-crabbe-and-why-he-ran-away-essay 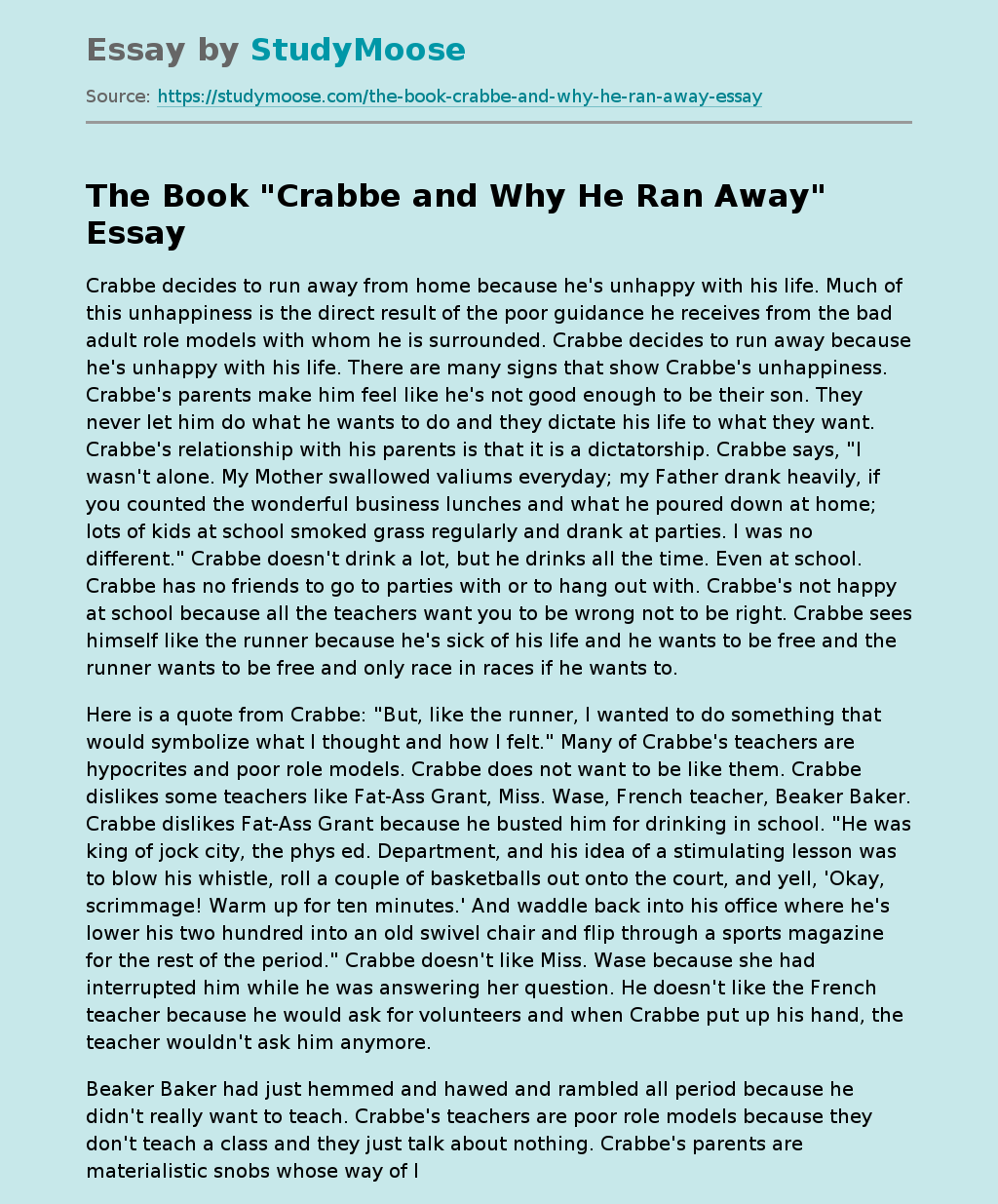