1. The assumptions that were used to derive the numbers in this forecast were found by taking the averages of the historical data that was given for 1999-2001. Instead of using the assumptions that were given by The Body Shop, I thought it would be more practical to use the trends shown in the historical data since that is more relevant to what might happen, rather than what The Body Shop wants to see happen. Of course it is possible to take reducing expenses and raising income into consideration but it is more realistic to follow the trends of the most recent years.

It is however important to keep in mind that improvement from year to year is always good to see and if the current trend is one that is sending a company into the red, then something will need to change.

A company always wants to be profitable and to stay afloat so forecasts should be used to see where a company might be heading if things were to continue the way they are, or even what changes might happen if corrective measures were to be taken.

In this forecast, a constant increase in sales was used, which was found by taking the average increase between 1999 to 2000 and 2000 to 2001.  Of course these sales figures might not be met in the future which would severely lower the overall profit after tax. With this in mind, it is important to be prepared to meet the possibility that this positive forecast might not be met and that more debt and liabilities will have to be paid off than expected.

Figuring out what the future markets have in store for a company is always tricky to determine.

2. If the future events of The Body Shop were to happen exactly as this forecast has said they would, then there will need to be a considerable amount of debt financing to be acquired. According to this forecast, GBP222.71 million will be needed to cover future debt. With such a large amount of debt financing needed, it would be a good idea to start changing current practices in order to lower possible future debt and to have a steadier foothold on The Body Shop’s financials.

3. The main drivers that are important to this forecast spreadsheet for 2002-2004 are historical data, the percent of sales, and the percent of current assets and current liabilities of total assets and total liabilities. By using historical data, a company can ascertain realistic values when making a forecast for future values. The historical values show what has previously happened to a company and by following the trend of the past, a forecaster can reasonably determine what might happen to the company in the future if the current standards were to stay the same. Historical data would also show a company that it might be time to change current strategies and to improve business practices.

The percent of sales is what The Body Shop has used to determine the expenses of the company in the past, and it would only be logical to continue using this method for this forecast. The Body Shop has an idea of how many expenses there are for the company in contrast to how much revenue the company makes. Therefore, in forecasting the next three years, and having an idea of how much revenue will be made, it is possible to determine how much expense the company should expect to have and if it is able to pay off any debt. Finally, using the percent of current assets and current liabilities of total assets and total liabilities is a main driver in that the more liabilities The Body Shop has the more expenses that need to be paid and the less net income that is brought in.

By having an idea of what percent each asset and liability is of total assets and liabilities it is also possible for The Body Shop to track if there has been an increase in spending or if there is too little inventory. Tracking current assets and liabilities shows the company the trends for that year by telling The Body Shop if the percent of cash is higher or lower than the percent of other current assets and so on. It is important for The Body Shop to know exactly how much it has of each asset and each liability in order to efficiently make progress in the future towards a more profitable company.

4. The finding’s that the forecasting spreadsheet has is relevant because the spreadsheet will give The Body Shop an idea of the financial position that it will be in for the next three years. It is important for companies to having financial forecasts because it is important to know if the company’s money is being spent wisely or if the company is making enough money to cover expenses and liabilities, and for the company to know what to expect for the next few years. As stated before, a forecast also shows if a business is going to have improvements that want to be seen or if it is necessary to start making changes now that will make the future of The Body Shop a more positive one. Looking at the trends of previous years shows The Body Shop exactly what happened and from there it can be determined if current trends should be changed or not.

5. Quantitative model forecasting is more popular than qualitative because it is more long term based and it takes out the human element by using data instead of opinions. Three types of quantitative forecasting models are the indicator approach, econometric, and time series. Indicators: The indicator approach has two definitions of either the technical analysis or of economic context. The technical analysis is defined as “a mathematical calculation based on a securities price and/or volume” (Investopedia, Indicators, 2014). This type of approach is more commonly used for forecasting trends in stocks or prices. The economic context approach uses different aspects in the economy to help forecast what might happen. It is of course more common to use the economic approach, in that a company can study what has historically happened to forecast what might happen in the future and to find out what steps need to be taken to achieve a certain forecast goal.

Econometric: This type of modeling is more mathematically based, focusing more on the relationship between indicators. When using econometrics to forecast, one would “take economic models and test them through statistical trials, [and] the results are then compared and contrasted against real-life examples” (Investopedia, Econometrics, 2014). This type of forecasting takes out all human based forecasting and relies strictly on having the numbers tell the forecaster what is to be expected for the future of a company. Time Series: Time series forecasting is the “use of past data to predict future events” (Beattie, 2011). Historical data is used a lot in today’s business world to show companies what happened in the past and how it might be a good indicator for what might happen in the future. Time series is thought of as “a better than average prediction about the future” (Beattie, 2011) for anyone who is trying to make a forecast of business events.

Whether the forecast of a company is correct or not, the forecast shows a company what to expect and how “to plan ahead of their needs, raising their chances of staying healthy through all markets” (Beattie, 2011) which is important if a company wants to stay in business. The most important aspect of a forecast is to be aware of where a company might be heading in the future, and to be capable of making the right decisions in the present to either meet what the forecast predicts, or to surpass it and to do better than expected. Of course a forecast doesn’t really use just one of the forecast models but rather a combination of several. A company might look at past events and past data and combine what might happen in the future by using mathematics.

Whichever approach is used, it just important for a company to have an idea of where it currently stands and where it is heading.

6. Looking at the actual results of The Body Shop (below) for 2002-2004 and comparing them to the forecasting that was done, the two seem to have a lot of differences. Sales were not able to increase at a steady rate of 11% but rather increased almost one and a half percent from 2001 to 2002 and then from 2002 on, sales barely increased at all (DueDil, 2014). The Body Shop was able to reduce its cost of sales and total liabilities and was also able to have an increase in its profit after tax after 2002. Overall the forecast may not have been very accurate on what actually happened, but it is also impossible to know everything that may affect a company and all its future ups and downs. However, accurate or not, it is still important for a company to know what the future might have in store for them. 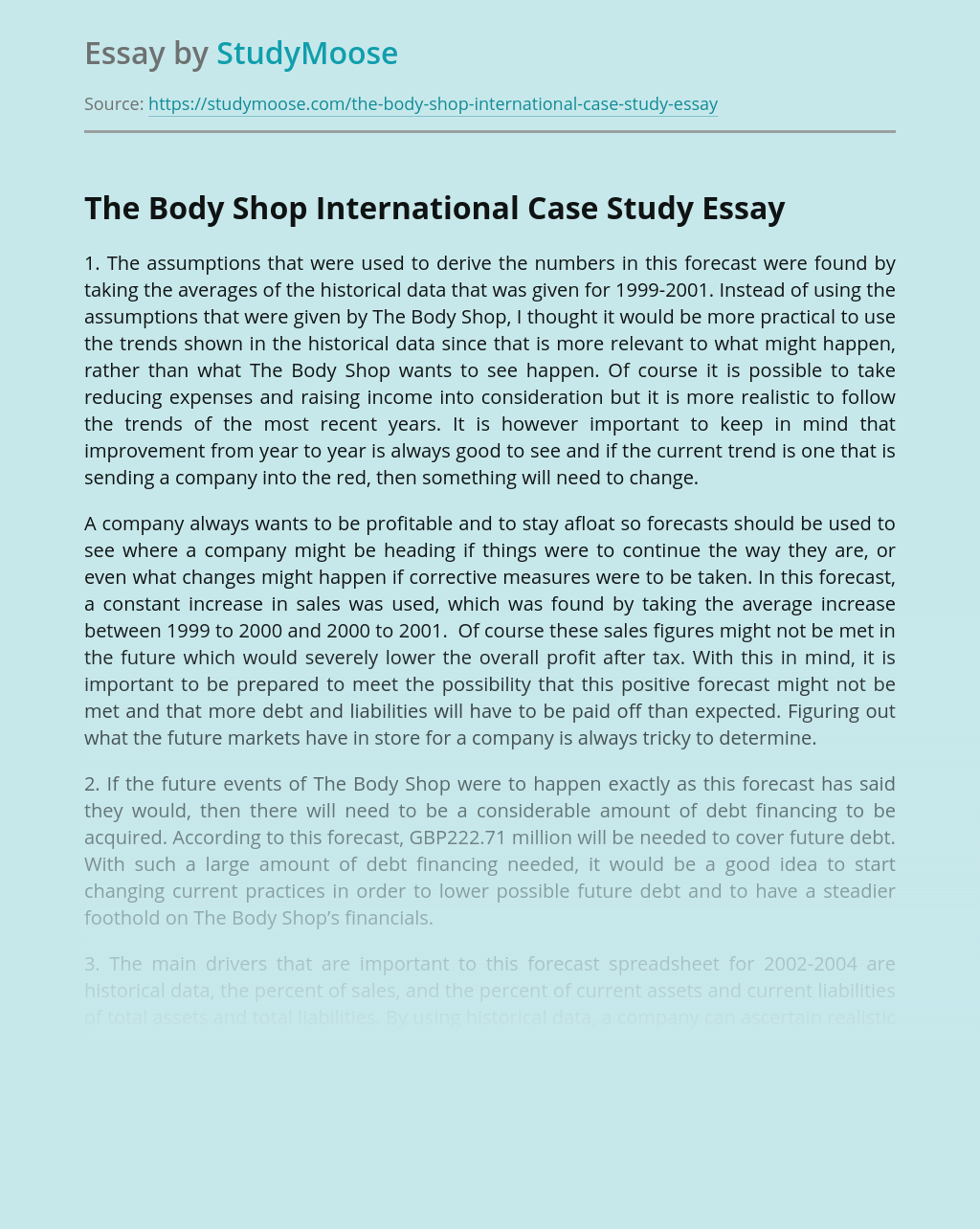